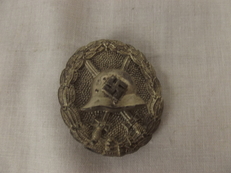 
A great hollow back example.

The Wound Badge (German: Verwundetenabzeichen) was a German military decoration first promulgated by Wilhelm II, German Emperor on 3 March 1918, which was awarded to soldiers of the German Army who were wounded during World War I.

Between the world wars, it was awarded to members of the German armed forces who fought on the Nationalist side of the Spanish Civil War, 1938–39, and received combat related wounds.

It was awarded to members in the Reichswehr, the Wehrmacht, SS and the auxiliary service organizations during World War II. After March 1943, due to the increasing number of Allied bombings, it was also awarded to civilians wounded in air raids.
It was awarded when the wound was the result of enemy hostile action.

The badge had three classes:

Black (3rd class, representing Iron), for those wounded once or twice by hostile action (including air raids).

Silver (2nd class) for being wounded three or four times.

Gold (1st class, which could be awarded posthumously) for five or more times wounded.

Please refer to the images, the badge is in good order and the clasp works well.

UK postage is £10, international is £12 or it can be inspected in our shop.