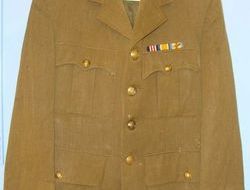 
The Royal Fusiliers served with distinction in the First World War,raising 76 Battalions The Regiment served on the Western Front, in Africa, the Middle East and Macedonia. Public Schools Battalions were British First World War Pals Battalions of Kitchener's Army, originally made up exclusively of former public schoolboys. The 19th Battalion, Royal Fusiliers were part of the 33rd Division, which was formed in April, 1915. It was an all-London Division with five public schools Battalions (18th to 21st Royal Fusiliers and 16th Middlesex). 2nd Lieutenant D.E.D Taylor served with the British Army between 1908-1924 and was an Officer with 19th Public School Battalion Royal Fusiliers during WW1. The Officer was awarded the prestigious Military Medal (MM) for valour and was mentioned in despatches (MID). This is 2nd Lieutenant D.E.D Taylor’s Uniform Jacket mounted with his WW1 medal ribbons (a photocopy of part of his medal card records from the National Archives Kew accompanies his jacket). The jacket is single breasted with open collar, pleated chest pockets and plain lower pockets with flaps. The tunic has all of its original brass Kings crown Royal Fusiliers Regimental buttons. The lapels of the jacket have the ignited grenade Regimental badges with correct rear lug and split pins. The epaulettes have the correct embroidered 2nd Lieutenant WW1 rank insignia. The collar of the tunic has a nice manufacturer’s label ‘Gieves Ltd’ with typed date ’12 may 1918’ and the Officers detail ‘Lt DED Taylor 19 PS Batl Royal F (19th Public School Battalion Royal Fusiliers). The Tunic is clean with some areas of light mothing which is stable. It is approx UK size 38" Chest. This WW1 tunic to a named British Officer decorated for valour is worthy of further research. Price includes UK delivery. U 105
£875.00 ...Read full description
CategoryAccessories
SubcategoryClothing
ConditionUsed
Price£ 875
Sale typeTrade
Manufactured Year1918
Your referenceU 105
Recommended UsageCollection item