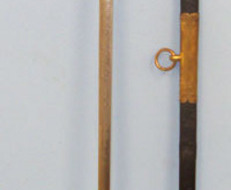 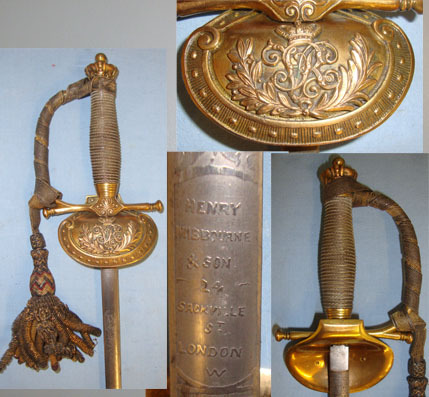 The small sword or smallsword (also court sword, French: épée de cour or dress sword) is a light one-handed sword designed for thrusting which evolved out of the longer and heavier rapier of the late Renaissance. The height of the small sword's popularity was between mid 17th and late 18th century. It is thought to have appeared in France and spread quickly across the rest of Europe. The small sword was the immediate predecessor of the French dueling sword (from which the épée developed). This is an excellent original British Victorian Court / small sword. It has the typical brass hilt with cross guard clam shell mount,. The clam shell has the embossed Queen’s crown with Royal cypher ‘VR’ (Victoria Regina) and Laurel wreath. . It has a bar knuckle guard and Crown pommel. The wire binding on the handle is tight and intact. The hilt is fitted with its original strap cord and bullion tasseled knot. Which has some wear but is intact. The slim 31 ½” rapier form blade is undamaged and has just small areas of staining consistent with age. The blade is etched on both sides with foliate decoration. One side also has the manufacturer’s name ‘Henry Mibbourne & Son 24 Sackville Street , London W’. The reverse has banners and arms amongst the foliate decoration. The sword measures 37” overall. It is complete with its original leather scabbard which has brass mounts and 2 hanging rings. The mounts have engraved foliate decoration. The price for this attractive Court / small sword includes UK delivery. ED 873