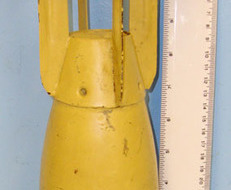 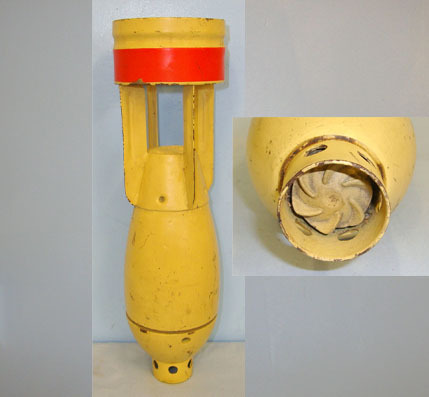 
INERT DEACTIVATED. This is a rare German WW2 SD 4/HL (Sprengbombe Dickwandig, Hohlladung thick-walled explosive bomb, hollow charge) introduced in March 1944 to counter Russian armoured vehicles (see page 143 of German Air dropped Weapons by Fleischer). The hollow charged bomb could penetrate 130mm of armour at 60 degrees and was armed with a super sensitive and quick eAZ66 electronic fuse. The bomb was usually dropped via the AB250 container containing 40 bombs or the AB500 container containing 74 bombs. This bomb retains approximately all of its original yellow finish and has four pressed steel fins spot welded to the rear of the projectile. The nose screws off to reveal in the nose part the bomb the eAZ66 fuse behind the perspex fuse cover. The fuse arming vanes are still present at the nose of the fuse. The main part of the bomb body retains the steel hollow charge cone with the sealing washer. This bomb was also used in the anti-personal role against mass troops. The tail has its original red paint SD designation band. The price includes UK delivery and no licence is required to own this item in the UK if retained as part of a collection or display. O 1426
£595.00 ...Read full description