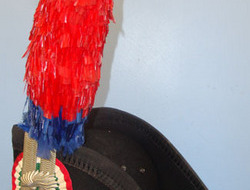 
Inspired by the French Gendarmerie, The Italian Carabinieri is the National gendarmerie of Italy, policing both military and civilian populations. It originally was founded as the police force of the Kingdom of Sardinia. During WW1 the Carabnieri fought alongside Italian troops. During the process of Italian unification, it was appointed the "First Force" of the new national military organization. Although the Carabinieri assisted in the suppression of opposition during the rule of Benito Mussolini, they were also responsible for his downfall and many units were disbanded by Nazi Germany, which resulted in large numbers of Carabinieri joining the Italian resistance movement. Since 2001, it has been one of the four Italian Armed Forces. This is an excellent original Italian Carabinieri Officer’s hat with state cockade and plume. The hat is made of black felt material with black lace trim & is in excellent original condition, complete with black leather chin strap with buckle and black cotton lining. The left and right sides have ventilation holes. To the front it has the distinctive Carabinieri ignited grenade plate with National colours rosette and removable ostrich feather plume. The lining has a small paper size label ’60 /7 3/8’. The price for this impressive piece includes UK delivery. Sn 13907:9
£475.00 ...Read full description
CategoryAccessories
SubcategoryClothing
ConditionUsed
Price£ 475
Sale typeTrade
Your reference13907:12
Recommended UsageCollection item