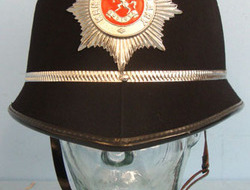 
In 1965, the force had an establishment of 1,988 attested constables and an actual strength of 1,766, making it the third largest county force in Great Britain. Kent County Constabulary kept this name until the 1990s, when it changed its name to Kent Police, the last British force to keep the word "county" in its official title. Although still unpopular with many residents of Kent, the change was necessary as the large number of visitors coming through the channel tunnel and the ports would understand the word "Police" more readily than "Constabulary". This is a very good, male Constable's / Sergeant's helmet of the pre 1990's Kent Constabulary. It has a blue serge 2 panel blue body, with a chromed rose boss and a Kent Constabulary Queen’s Crown (QE II) helmet plate with red enamel centre. The inside has a fully adjustable leather sweat band leather chinstrap. The sweat band has an ink stamped size "7 1/4" and a handwritten "A21" and "P/Sgt 4016". The price for this pristine helmet includes UK delivery. Sn 13907:16
£135.00 ...Read full description
CategoryAccessories
SubcategoryClothing
ConditionUsed
Price£ 135
Sale typeTrade
Manufactured YearPre 1990's
Your reference13907:16
Recommended UsageCollection item