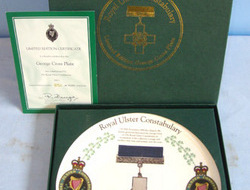 
King George VI created the George Cross on 24th September 1940. It is the highest honour that can be awarded to civilians and has precedence over all medals with the exception of the Victoria Cross. The George Cross is awarded for acts of great heroism or for the most conspicuous courage in circumstances of extreme danger. The Royal Ulster Constabulary served all the people of Northern Ireland with valour and gallantry from 1922 up until 2001. Many members of the RUC paid the ultimate sacrifice and gave their lives for the safety of the community as a whole. The GC was awarded to the RUC in 1999 by Queen Elizabeth II following the advice of her Government. The Queen presented the George Cross to the organisation at Hillsborough Castle, County Down. The citation published by Buckingham Palace on 23 November 1999 stated: “For the past 30 years, the Royal Ulster Constabulary has been the bulwark against, and the main target of, a sustained and brutal terrorism campaign. The Force has suffered heavily in protecting both sides of the community from danger—302 officers have been killed in the line of duty and thousands more injured, many seriously. Many officers have been ostracised by their own community and others have been forced to leave their homes in the face of threats to them and their families. As Northern Ireland reaches a turning point in its political development this award is made to recognise the collective courage and dedication to duty of all of those who have served in the Royal Ulster Constabulary and who have accepted the danger and stress this has brought to them and to their families”. Two years later (on 4 November 2001), as a result of the Patton Report the RUC became the Police Service of Northern Ireland incorporating the Royal Ulster Constabulary GC. This is one of a limited edition of only 15,000 glazed china plates commissioned by the RUC to commemorate the award of the George Cross to the Force. The plate has colourful highly decorative design featuring images of the RUC badge and George Cross with a border of clover leaves together with text detailing the award of the Geoge Cross. The rear of the plate also features the RUC badge and text outlining detail of the award and certifying the plate as being limited edition number 851 of 15,000 pieces. The plate is in mint condition, undamaged and contained in its original green cardboard presentation box with removable lid. The lid has a large roundel featuring the RUC name and the George Cross highlighted in gold. The case has its original white cardboard sleeve and is accompanied by its original Limited Edition Certificate which bears an image of the signature of RUC Chief Constable Sir Ronnie Flanagan OBE MA. The price includes UK delivery. Sn 11832
£85.00 ...Read full description
CategoryAccessories
SubcategoryOther Accessories
ConditionNew
Price£ 85
Sale typeTrade
Your reference11832
Recommended UsageCollection item