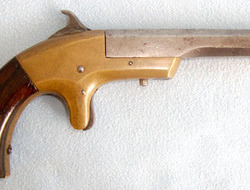 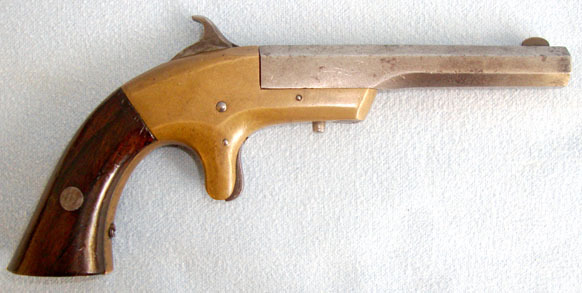 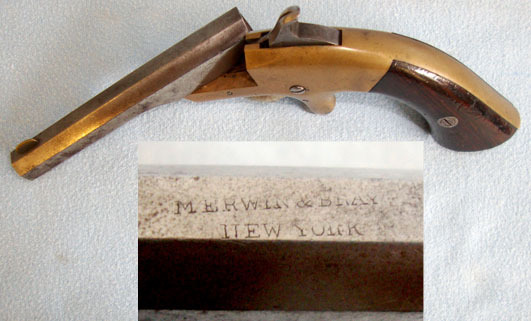 The American Joseph Merwin was involved with marketing and manufacturing revolvers as early as 1856. Based in New York City he formed an arms company known as Merwin & Bray. The company ceased trading under that name by 1874. This is an excellent example of the Merwin & Bray derringer which are hard to find. It has a brass frame with even patina & original American Walnut grip which has just the knocks bumps and bruises consistent with age. It has a 3 ¾” octagonal steel barrel & measures 6 ¾” overall. The bore has faint rifling & staining consistent with age & use. It has a sheathed trigger and brass blade foresight. The rear sight consists of a notch in the hammer spur. The top of the barrel is signed by the manufacturer ‘Merwin & Bray New York’. The derringer's loading and firing actions work perfectly. There are no other visible external manufacturer marks or numbers on this piece. The barrel pivots for loading at half cock and the barrel is released for loading by depression of a small steel button on the underside of the action. Price for hard to find Wild West era derringer includes UK delivery. NB As an antique obsolete calibre derringer no licence is required to own this item in the UK if retained as part of a collection or display. Sn 14247