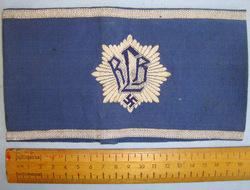 
The ‘RLB’ or Reichsluftschutzbund (State Air Protection Group) was a Nazi organization founded in late 1932, and from 1933 given the role of air raid protection and civil defence duties. The Reichsluftschutzbund maintained a system of paramilitary ranks similar to that of the Nazi Sturmabteilung (SA). The bulk of the members were volunteers trained to deal with air raid precautions as well as the resulting damage cause by Allied bombing raids. This is a quality made, original Nazi ‘RLB’ Reichsluftschutzbund Officer’s armband. The armband is made of deep blue cotton with a a large central embroidered central ‘RLB’ badge. The armband has a stitched hem with bright aluminium bullion tape around the upper and lower edges. The rear of the armband has embroidered lettering ‘Ehra-Wuppertal Ges Gesch (Quality Assurance). The armband is undamaged with just staining consistent with age. It measures 19x 10cms. As with all of our stock this item is guaranteed 100% genuine. Price for this quality Nazi RLB Officer’s armband includes UK delivery. Sn 11818:4
£195.00...Read full description
CategoryAccessories
SubcategoryOther Accessories
ConditionUsed
Price£ 195
Sale typeTrade
Manufactured YearWW 2 era
Your reference11818:4
Recommended UsageCollection item