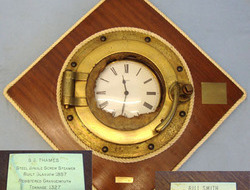 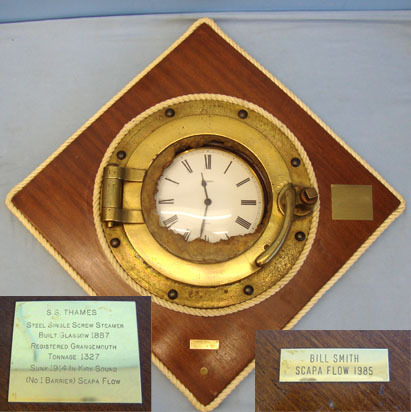 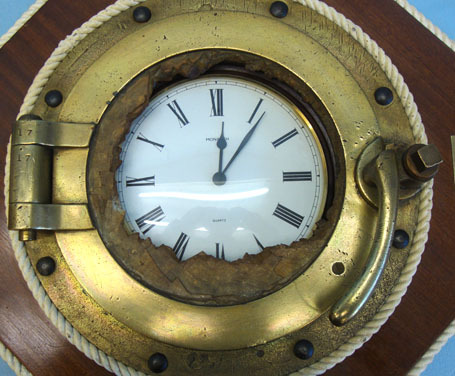 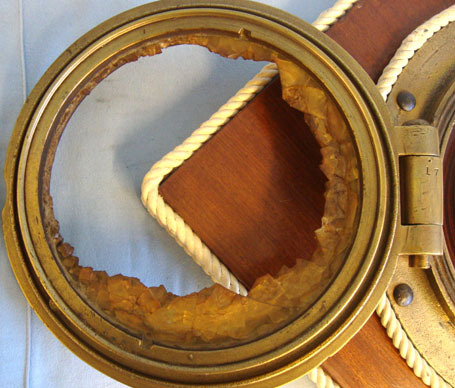 
Recovered, WW1 Royal Naval, SS Thames brass porthole. Historically, the main British naval bases were located near the English Channel to better face Britain's old enemies, France, Spain, and the Netherlands. In 1904, in response to the build-up of the German Kaiserliche Marine's High Seas Fleet, it was decided that a northern base was needed to control the entrances to the North Sea, as part of a revised policy of 'distant' rather than 'close' blockade. John Rushworth Jellicoe, admiral of the Grand Fleet, was perpetually nervous about the possibility of submarine or destroyer attacks on Scapa Flow. Whilst the fleet spent almost the first year of the war patrolling the west coast of the British Isles, their base at Scapa was defensively reinforced, beginning with over sixty block-ships sunk in the many entrance channels between the southern islands to facilitate the use of submarine nets and booms. These blocked approaches were backed by minefields, artillery, and concrete barriers. The SS Thames was one of these block ships. The SS Thames was scuttled by the Royal Navy in 1914 in Kirk Sound, (No 1 Barrier, Scapa Flow) it was a single screw steamer built in Glasgow in 1887, registered at Grangemouth and weighing 1327 Tons. The porthole was recovered by a diver Bill Smith from Scapa Flow in 1985. The porthole is solid brass and as such is very heavy. The porthole lock operates smoothly as it should. The porthole retains a small portion of the original thick glass. It is mounted on a mahogany board and it has two brass plates screwed to it, the first is inscribed with "SS Thames Steel Single Screw Steamer Built 1887 Registered Grangemouth Tonnage 1327 Sunk 1914 in Kirk Sound (No 1 Barrier, Scapa Flow)" and the second plate is etched with "Bill Smith Scapa Flow 1985". The porthole has a line of white rope round the circumference as does the mahogany plinth. The port hole measures 14 3/4" in diameter and the plinth 19 1/2" square. The clock is a Quartz clock by Monarch. Also with this item is a signed paper authenticating the recovery of the porthole signed by Bill Smith. This is a very nice display item. Please note this is a heavy item weighing just over 18kgs. The price includes UK delivery/. Sn 13483
£595.00...Read full description
CategoryAccessories
SubcategoryOther Accessories
ConditionUsed
Price£ 595
Sale typeTrade
Manufactured Year1887
Your reference13483
Recommended UsageCollection item