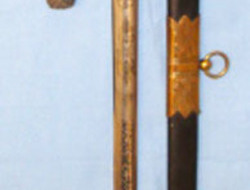 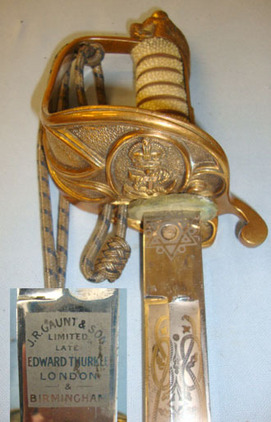 This is an original British Royal Navy NCO’s Sword and Scabbard. The Sword made prior to 1952 has a steel single edged straight blade which is 31 ½” in length with central fuller (37 ¼” overall). The blade is etched with foliate panels on both sides. One side has the arms of Great Britain and the reverse has the King’s Crown and the Royal Navy fouled anchor. The riccaso is marked on one side by the retailer ‘By JR Gaunt & Son Ltd Late Edward Thurkle London & Birmingham’. The reverse has the ordnance acceptance proof star and inlaid roundel. The back of the blade is numbered ‘15782’. It has a brass Lions head pommel with ball top, grip strap & full knuckle guard with the Royal Navy King’s Crown and fouled anchor motif. One side of the guard has a small hinged folding langet which, when folded flat fastens to a pin on the throat mount of its scabbard and holds the sword securely in place. The sword’s fish skin grip with wire binding is in great condition. Attached to the guard is its twisted bullion cord and portepee. The sword is complete with its black leather scabbard which has brass mounts and 2 hanging rings. Price includes UK delivery. Sn 12331