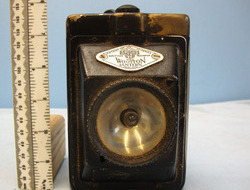 
An excellent condition British Police 1920's Wootton Lantern by Smiths of Cricklewwod. Batteries have been around since 1800 but these were bulky and used a liquid acid as an electrolyte and therefore were impractical for use in any hand-held light. What was to be called the dry cell battery came into being around 1880 but was still too bulky to be considered for use in a convenient personal-use light. In 1887, a true dry cell battery was invented. The dry cell did not require a liquid acid as electrolyte and therefore was “dry”, and so the name. The lamp itself was designed by George Arthur Henry Wootton who was the Assistant (Chief) Engineer of the Metropolitan Police in the 1920s. The patent carries the date of 23rd November, 1922. This lamp was powered by an accumulator of 2 volts and the lens was able to be focused by turning the metal ring around the lens. The lamps were used mainly by police. The manufacturer of these lamps, Smith’s and Son was situated in Cricklewood. The lamp is in very good undamaged condition. The top is released by pushing a button on the side, see one of the photographs. On the top is a rotating on off switch which operates smoothly. There is a compartment in the front under the lens which holds a spare bulb, which is present. The light can be focused by twisting the lense cover on the front, this rotates as it should and the lenses moves forward and back to focus as it should. The bulb in the lamp is also present. There is a manufacturer's plate on the front with "Patent No 201089/22 (1922) Smiths British manfcr The Wootton Lantern". There is also a small push button to the side of the lenses. On the reverse it has two fold out brass handles which open and close smoothly. The bottom has "The Wootton Lantern Patent No 201089 Ser no 62923 sole manufacture S Smith & Sons (Ma) Ltd Cricklewood London". The lantern retains about 80% of the original black paint. It is undamaged. The price includes UK delivery. 13907:39
£295.00 ...Read full description
CategoryAccessories
SubcategoryOther Accessories
ConditionUsed
Price£ 295
Sale typeTrade
Manufactured Year1920's
Your reference13907:39
Recommended UsageCollection item