The current, shambolic general licences expire on 29 February 2020. Tied in legal knots by the anti-shooting Wild Justice group, UK environment department DEFRA is currently not in a position to issue new general licences for the shooting and trapping of pest birds in England when they expire in February, says the shooting organisation BASC. Farmers, conservationists and pest controllers are growing increasingly concerned that Defra won’t be able to issue new licences. In the letter, BASC recommends an extension to ensure clarity and time to issue general licences that will be fit for purpose and future-proofed.

The current general licences only achieved wholesale slaughter of livestock and rare songbirds in 2019 – perhaps not what Wild Justice was hoping for:

Throughout 2019, opinion hardened against Natural England, which started this debacle. Mistakes pile upon mistakes at the DEFRA department, which has had responsibility for general licences taken away from it. With sheep farming under pressure from pest birds on the Isle of Wight, for example, Natural England authorised the release of 60 lamb-eating sea eagles there. Read the story here. 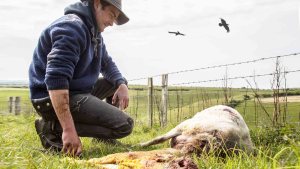 The new licences for woodpigeons, carrion crows and Canada geese are hugely restrictive compared to the old licences:

The general licences debate hasn’t moved on since June 2019. This was what was happening then:

UK environment secretary Michael Gove tried to reassure the public that he was underway with his consultation on the general licences. Since then, he’s been replaced by Theresa Villiers. Here are the rules she inherited: 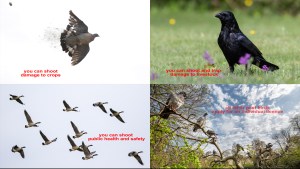 Find out what went wrong with the general licences in this film on ParliamentLive.tv, where the DEFRA Select Committee lays into Marian Spain, Tony Juniper and Lord Blencathra from Natural England.

Your own average personal tally was:

Even birdwatchers have started protesting against the general licences. ‎A birdwatcher called Michael Brewer‎ posted these photos on Facebook from RSPB Leighton [Layton] Moss on the Yorkshire Birds and Birders group. He spotted the first of the avocets chicks that had hatched at 8.30am. By lunchtime, all had been eaten by the gulls. He writes: “The amount of gulls and crows nowadays is at epic proportion. The little birds have no chance.”

For other species, the new forms are on the Natural England website. Andy Crow walks us through the new licensing system for shooting/trapping pest birds.

All you have to do is:

“You can also apply online – but it doesn’t let you,” says Andy. And viewers are reporting that even the Natural England email mailbox is full and returning emails, plus those who get through to Natural England on the telephone are being told not to apply but wait until new licences are released. The threat of private prosecutions by anti’s make that too risky for anyone with a shotgun licence.

Natural England has also put up new licence for carrion crows here and for Canada geese and woodpigeons – but they’re significantly different to the old ones, were introduced without consultation, and the shooting organisations oppose them. Full story here.

Now protestors against the new general licences and Natural England’s handling of the chaos plan a London march. Here’s the story on that.

On Tuesday 23 April 2019, the picture was very different, as our report makes clear:

It said it planned to solve the problem in the short-term by putting up forms on its website. Anyone needing to control one of 16 bird species where there’s no reasonable non-lethal alternative will need to apply for an individual licence in the same way they apply for licences to control birds such as cormorants and ravens. There were fears that these licences would take weeks to obtain and are seldom given out – though Natural England reassures shooters: “If people need to take action in the meantime they will need to apply for an individual licence, using a simplified process which will be available on gov.uk from 25 April”. That’s the form now available at Bit.ly/natengland.

Natural England’s Marian Spain said: “We recognise this change will cause disruption for some people, but we’re working hard to ensure it’s kept to a minimum.

“We’ll bring forward interim measures as quickly as possible as the first stage of our planned review of the licences. We want to make sure our licensing system is robust and proportionate, taking into account the needs of wildlife and people.”

Her words didn’t reassure shooters across the UK, who reacted angrily. 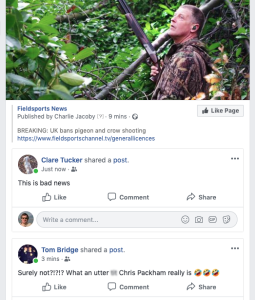 As well as the hundreds of thousands of pounds-worth of damage to British agriculture and the cost to the countryside at the height of the nesting season, nuclear power stations told pest controllers they were pausing pest control.

General licences were introduced in the 1980s as a government fudge to allow the legal control of pest bird species, after the government accidentally banned all bird shooting when it signed up to the 1979 EC Birds Directive. They allow the ban to stay but grant ‘general’ licences to all citizens in England and then Wales with permission to shoot pest birds. The Tory government of the day told shooters that the licences would be renewed automatically every year and nothing would change. In the early 2000s, the Labour government looked at revoking them as a back-door to banning bird shooting – but it tracked back from that position. Now BBC presenter and animal rights activist Chris Packham has succeeded where anti-shooting politicians failed and has forced a ban with a simple legal letter.

Liam Bell, chairman of the National Gamekeepers’ Organisation said, “Natural England has made an absolute shambles of this and has put gamekeepers and others to huge inconvenience and concern, to say nothing of imperilling vulnerable nesting gamebirds and wildlife. We are united with other like-minded organisations in demanding a return to workable General Licensing within the shortest possible time. Once that has been secured, there must surely be consequences for those at NE who have made serious mistakes and miscalculations.”

Viewer Dan Spence who unusually managed to reach Natural England on the telephone was told: “No point applying for a licence as the new General Licences will beat your application.”

Click here for BASC’s document on the benefits of the general licences.