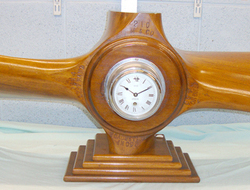 
De Havilland Bi Planes were used by both the British & Americans during WW1 as Bomber & Reconnaissance Aircraft. This is an excellent WW1 British De Havilland Aircraft Propellor Boss Hub Converted To an Officer's Mess Feature Piece With Chrome Plated Cased Front Wind Clock By Smith & Son Southampton. The original Mahogany propellor boss is undamaged and the piece measures a large 42x17x11 inches (including plinth & clock). The blades near to the boss centre are marked ' DE.H.4 LEFT HAND', '210 M & Co', 'ENGNO 450' & '250HP ROLLS ROYCE'. The hub centre is mounted with an undamaged, glazed chrome plated cased clock which is in full working order. The face of the clock which is a maritime piece is clearly marked by the manufacturer 'Sestrel' & 'F. Smith & Son, Southampton'. It has it's original minute and hour hands and crisp numerals. The clock with glazed hinged cover has it's original key. The boss is mounted on a large wooden plinth made from the wood of the propellors. The price for this superb British WW1 Combat Aircraft centre piece includes UK delivery. MISC 809
£575.00 ...Read full description
CategoryAccessories
SubcategoryOther Accessories
ConditionUsed
Price£ 575
Sale typeTrade
Manufactured YearWW 1
Your referenceMISC 809
Recommended UsageCollection item