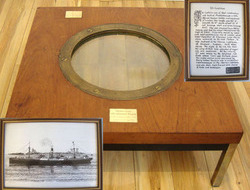 
This is a Schreiber coffee table with a brass porthole rim set into it along with two etched brass plates. The Porthole and Porthole glass were both recovered from the sea by a diver Bill Smith. The porthole was recovered from the wreck of the SS Castilian. SS Castilian was carrying a cargo of munitions to Lisbon when she struck East Platters Rocks, near The Skerries, Anglesey, Wales and on 12 February 1943 sank. She was steam ship built in 1919 and was 1849 tons. Since this recovery, in 1987 a Royal Navy clearance vessel spent several months removing unexploded ordnance from Fydlyn Bay nearby believed to have come from the wreck. In 1997 the location of the wreck on East Platters Rocks was designated under section 2 of the Protection of Wrecks Act 1973 with a 500 m exclusion zone regarding scuba diving activities because of its potentially dangerous cargo. The diver Bill Smith also recovered a steel porthole from the wreck of the German Battleship SMS Kronprinz Wilhelm, which was built and launched on 21st February 1914 and was scuttled on the 21st June 1919 in Scapa Flow Orkney after the surrender of the German High Seas Fleet. The porthole was so deteriorated that Bill Smith carefully removed the glass which was still in tact and fitted it to the brass porthole from the SS Castilian. The table measures 25 1/2" x 25 1/2" x 11" high. The porthole measures 16" in diameter. The two plaques read "Porthole Glass SMS Kronprinz Wilheim 25,388 Tons Battleship Launched 21-2-14 Scuttled 21-6-1919 Scapa Flow" and the other reads "Brass Rim SS Castilian 1849 Ton Steam Ship Built 1919 Wrecked 12-2-1943 East Platters". Bill Smith has also written an authentication letter for the rim and it is complete with a limited edition 19/250 print by Barry G. Hawkins who is an assistant light house keeper on the Skerries Lighthouse. The print measures 12 1/2" x 9" in a frame and with it a framed explanation of the SS Castilian and the wrecking details by Barry Hawkins Also included is a book on Scapa Flow wrecks. This is a very nice, complete collection. The price includes UK delivery. Sn 13482
£395.00...Read full description
CategoryAccessories
SubcategoryOther Accessories
ConditionUsed
Price£ 395
Sale typeTrade
Your reference13482
Recommended UsageCollection item