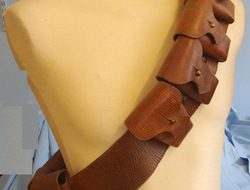 
The Australian Light Horse were mounted troops with characteristics of both Cavalry and mounted Infantry. They served in the Second Boer War and WW1. Light Horse were like mounted Infantry in that they usually fought dismounted, using their horses as transport to the battlefield and as a means of swift disengagement when retreating or retiring. A famous exception to this rule though was the charge of the 4th and 12th Light Horse Regiments at Beersheba on 31 October 1917. In 1918, some Light Horse Regiments were equipped with sabres, enabling them to fight in a conventional Cavalry role in the advance on Damascus. However, unlike mounted Infantry, the Light Horse also performed certain Cavalry roles, such as scouting and screening, while mounted. 5 Brigades of Australian Light Cavalry took part in the Gallipoli campaign 25 April 1915 and 9 January 1916 (elements of Light Horse formed part of the ANZAC Mounted Division). Image 2 shows a contemporary image of a mounted Australian Light Horse Trooper in the field wearing a 1903 Pattern bandolier. Made of brown leather this original P1903 Australian Light cavalry ammunition bandolier has the correct nine individual ammunition carrier pouches with full flap covers capable of carrying 90 .303 calibre rounds in total. Each carrier has heavy rivets and stitching together with a single brass stud to secure the flap covers. The bandolier is fitted with its original heavy duty brass buckle. The leather is impressed with War Dept arrow and 1915 date together with an unreadable manufacturer name above ‘Sydney’ (Australia), all illustrated inset in image 2. All leather and stitching are intact. Price includes UK delivery. Sn 11019
£425.00 ...Read full description
CategoryAccessories
SubcategoryOther Accessories
ConditionUsed
Price£ 425
Sale typeTrade
Manufactured Year1915
Your reference11841
Recommended UsageCollection item