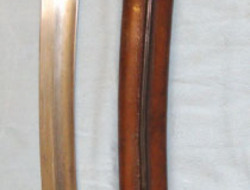 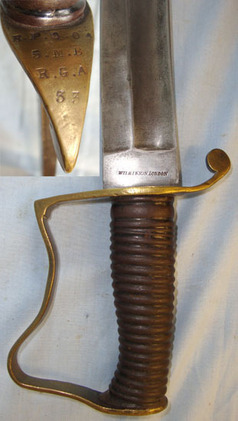 In 1896 a special Pattern of sword was introduced for all ranks of the Mountain Artillery Batteries. This pattern of sword is one of the rarest of regulation patterns and was used by British & Indian troops during campaigns on the North West frontier & WW1(see pages 228-230 of Robson's book Swords Of The British Army). This is an excellent original example. The Sword has a 30 " single edged blade with fuller (34 ½” overall). The blade is crisply marked on one side by the manufacturer 'Wilkinson, London' and the other side with an India service 'I' with WD arrow above ‘SD’ mark. It has brass knuckle guard and cross guard which is marked ‘5 M.B R.G.A’ to the 4/5 th Mountain Battery Royal Garrison Artillery and weapon number ‘53’. Interestingly five guns of the 5th Mountain Battery RGA were present at the Battle of Neuve Chapelle as part of the Indian Corps and were in position to provide direct fire on German positions in support of 7th and 8th Divisions of IV Corps, losing one gun to enemy fire. The Mountain Artillery generally was deemed to have been lacking in effect due to the absence of any High Explosive shells, the shrapnel shells being ineffective against fortified positions (see Command and Control 1888-1918 by Martin Sands, pages 104-108). It also stamped ‘R.P.Q. 04’. It is complete with its MK II leather scabbard with brass mounts. The mounts have some denting consistent with service use but are totally secure. The leather has a very faint unreadable inspection mark. All stitching & leather of the scabbard are intact. Price for this rare sword includes UK delivery. Sn 12894