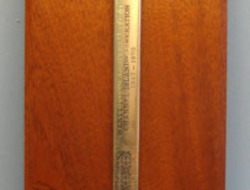 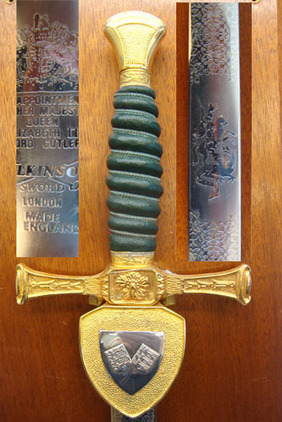 A limited edition (LR 99) made by Wilkinson Sword craftsmen to commemorate the 25th Anniversary of the Cannel Islands Liberation 1945-1970. The Channel Islands were occupied during World War II by German forces from 30 June 1940, until May 1945. They were liberated by British forces following the general German surrender. Considered not defendable by the British government in 1940, the islands were demilitarised and some civilians were given the opportunity to evacuate to England before the German forces arrived. The island leaders and some civil servants were asked to stay in their posts to look after the civilians in their care. 41,101 remained on Jersey, 24,429 on Guernsey and 470 on Sark. Alderney had just 18. Apart from undertaking a few commando raids, the islands were ignored by the British government until June 1944 when additional attacks on German shipping and radar units took place. To avoid starvation of civilians, permission was given for Red Cross parcels to be sent to the islands during the winter of 1944-45. Liberation would have to wait until the end of the war in Europe. The sword has a double edge plated steel blade, acid etched with a commemorative inscription "Twenty Fifth Anniversary of the Channel Islands Liberation 1945-1970". On the reverse it is stamped with 'LR 99', being part of a limited edition sword. It has a gilt metal crossguard, pommel and langet which bears the Guernsey and Jersey arms. It has a very nice wire bound green leather grip. The blade measures 33 1/2"long. It is mounted beautifully on a large polished mahogany plaque which is drilled for wall mounting and measures 9" x 46". The price includes UK delivery. Sn 13548 ****(see the other sword in stock Sn 13549)***