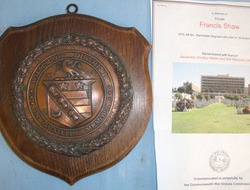 
This is an original memorial shield to a British Soldier who fell during WW1. A week away from Christmas Day and 331 British Army Officers and men lost their lives on 18th December 1914. Add in men from other nationalities and men serving with the Royal Navy, Mercantile Marine and Royal Air Force and that figure increases to 372. This shield in memory of Private 2270 Francis Shaw 8th Battalion Manchester Regiment Killed In Action 18th December 1914 has a wooden shield shaped base which measures 9” x 9 ½” x ½” has a large centre mounted copper boss which is 6 ½” diameter. The boss with laurel wreath bears heraldic arms below ‘Wilmslow District 1914-1919’ (Cheshire) and states ‘ In Grateful Memory Pte Francis Shaw 1/3 Manr (Manchester) Regt Who Died For His King & Country In The Great War’. The rear of the shield has a hanging ring for wall mounting. The shield is accompanied by an A4 size paper copy of the War Graves Commission entry in memory of the Soldier which states ‘Remembered With Honour Alexandria (Chatby) Military & War Cemetery’. Also included is a small printed note outlining the history of the Manchester Regiment and its involvement in WW1 (the documents are illustrated in the images). The price for this memorial shield to a named WW1 Soldier worthy of further research includes UK delivery. Sn 13738
£275.00 ...Read full description
CategoryAccessories
SubcategoryOther Accessories
ConditionUsed
Price£ 275
Sale typeTrade
Manufactured YearWW 1 era
Your reference13738
Recommended UsageCollection item