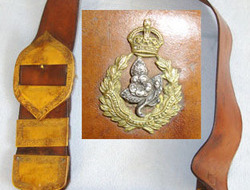 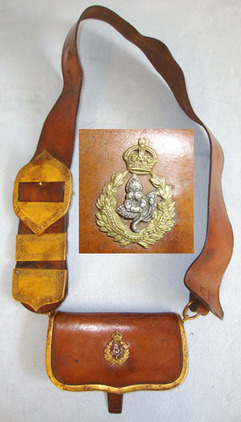 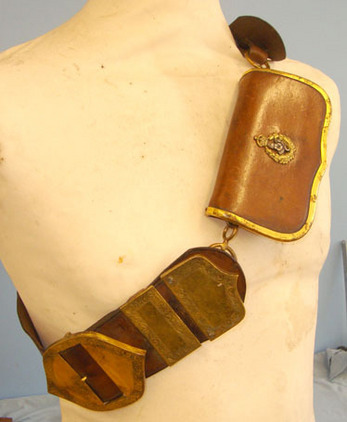 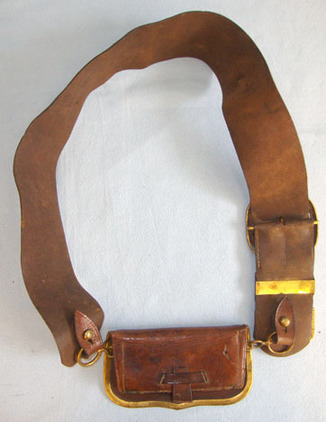 
The Queen's Own Worcestershire Hussars was a Yeomanry regiment of the British Army. First raised in 1794, it participated in the Second Boer War and World War I as horsed cavalry before being converted to an anti-tank regiment of the Royal Artillery for service in World War II. In 1956 it was amalgamated with the Warwickshire Yeomanry to form the Queen's Own Warwickshire and Worcestershire Yeomanry. In 1899, they were called for service in the Imperial Yeomanry, for the Boer War and formed part of the newly formed Imperial Yeomanry Cavalry. The Regiment fought in WW1 and on return from Palestine in 1919 it had become clear during the war that cavalry was obsolete and in 1922 it was announced that the Worcestershires were to become a Royal Artillery Regiment. The Regiment fought with distinction in WW2. This is a nice original Pre 1953 Worcestershire Imperial Yeomanry Cross Belt & Pouch. The belt and pouch are leather. The belt is 32" long. The belt has ornate brass plates with void panels. The leather covered steel pouch opens as it should and has a leather tab with single brass stud fastener. The leather covering has some wear consistent with age and service use. The front of the pouch is mounted with the bi metal badge of the Worcestershire Imperial Yeomanry with King’s Crown. The rim of the pouch cover is brass. Price for this attractive, complete, Yeomanry cross belt & pouch includes UK delivery Sn 12769
£395.00 ...Read full description
CategoryAccessories
SubcategoryClothing
ConditionUsed
Price£ 395
Sale typeTrade
Manufactured YearWW2 / Pre 1953
Your reference12769
Recommended UsageCollection item