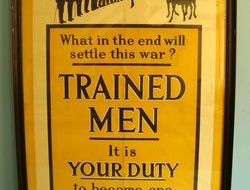 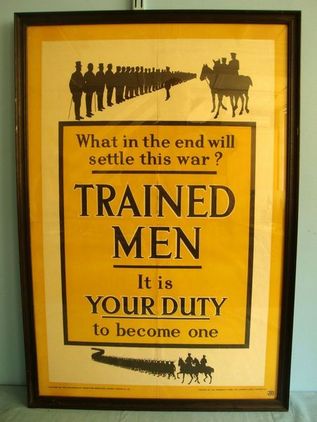 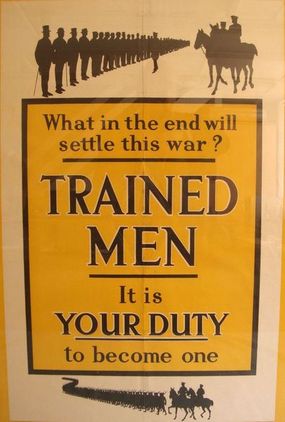 Although the technology to enable the relatively inexpensive mass production of high quality images had been in existence for over a century, the First World War saw the first extensive use of posters for propaganda purposes. The British Parliamentary Recruiting Committee (PRC) was a thirty member body organized by political party organizers, under the supervision of the War Office, with the express aim of aiding the raising of troop numbers in Britain’s volunteer army. The main modes of appeal were through mass recruiting rallies and through posters and pamphlets that encouraged enlistment. Within a few weeks of the outbreak of the war the designs of poster began to incorporate striking graphic images. Some 200 different posters were produced and distributed by the PRC over the course of the War. War posters were intended to be ephemeral and never meant to be archival or historical documents. Yet, because of the content of the messages they projected they have become an important resource by which we can today explore the mind set of those who believed passionately in the rightness of the cause and the necessity to wage War between 1914 and 1918. This is an original WW1 British Government PRC framed recruiting PRC Poster No.34. The poster mounted in its glazed wood frame measures 31 ¼” x 21 ¼” x 1”. The rear of the frame is mounted with wire for hanging. The poster is clean and undamaged. The poster features bold black lettering on a field of gold & white ‘WHAT IN THE END WILL SETTLE THIS WAR ? TRAINED MEN IT IS YOUR DUTY TO BECOME ONE’ together with imagery of mounted Officer’s addressing ranks of civilians and Mounted Officer’s later leading trained Soldiers to War. The bottom edge of the poster has crisp printing ‘Published by the Parliamentary Recruiting Committee Poster No.34‘ together with manufacturer detail ‘Printed by Jas Truscott & Son Ltd Suffolk Lane London EC’ together with manufacturer’s trade mark. All of the printing is clear and bright. NB. Due to the fragile nature of this piece it is only available with frame within the UK and delivery/ collection will be by arrangement. PI 131