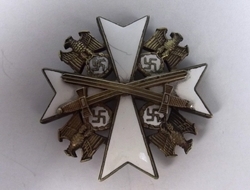 
The Order of the German Eagle was a diplomatic and honorary award of the German Nazi regime, given to predominantly prominent foreigners, particularly diplomats, who were considered sympathetic to Nazism.

The Order was instituted on 1 May 1937 by Adolf Hitler. It ceased to be awarded following the collapse of the Nazi Government at the end of World War II.

This 4th class medal is made of gilt brass and white enamel. At the centre is a pair of crossed swords surrounded by four Nazi Imperial War Eagles (Eagles sitting on swastika) separated by the four points of the white enamel cross.

Some of the white enamel cross panels have been cracked. The piece remains in otherwise good order.