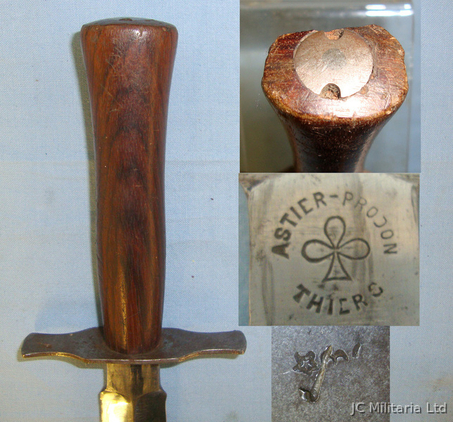 From 1915 the French begun to develop trench weapons at the Châtellerault arms factory, with Lieutenant-Colonel Coutrot experimenting by converting existing military swords and bayonets into combat daggers. Several designs were decided upon and then sent to be manufactured by private firms. Despite such variety of knives being issued to French troops during the War, there was only one, the Modèle 1916, that received an official military designation. Given this fact, it is strange that the dagger was in fact devised by the cutlery manufacturer Astier-Prodon of Thiers, rather than Châtellerault. It was subsequently produced by a number of other civilian manufacturers to keep up with demand. Early models lack a metal reinforcing ferrule, to strengthen the connection of blade to hilt found on later examples. Some of the Modèle 1916 daggers are marked 'Le Vengeur de 1870' on the blade, referencing the fall of Paris and French defeat in the Franco-Prussian war. This is an excellent, rare, early production French Model 1916 Fighting Knife. WW1 variants by French makers available to French troops are identical to the Avenger of 1870 examples but without the Avenger inscription, see page 29 items 109 & 110 of Fighting Knives by Fred Stephens where a similar Model 1916 / Avenger variant to ours is illustrated, with a scabbard identical to ours. Our knife has a 6 ¾” long clean double edged dagger blade with medial ridge and is correctly the same form as those found on European manufactured versions of the American pattern 1918 knuckle daggers. The blade is without Avenger inscription, the shank is crisply manufacturer marked ‘Astier-Prodon, Thiers’ together with 3 clover leaf trademark. The flat, shaped steel cross guard has a faint acceptance stamp which appears to be */B. The knife measures 11 ¼” overall length. The original solid wood grip has a flat, round steel pommel tang screw / bolt. The hilt is without ferrule indicating early production. The wood has just one old stable chip on one side near to the pommel. The blade and grip are totally secure with no movement. The correct original scabbard is steel has correct elongated belt loop bar. The scabbard has no damage. The price includes UK delivery. Sn 18798