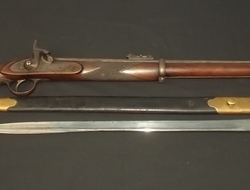 
This is an excellent example of a Lancaster rifle and its bayonet and scabbard.

In 1846 Lancaster constructed a model rifle, with which he experimented at Woolwich with success at distances of 1,000 and 1,200 yards (920 and 1,100 m). The Duke of Wellington then ordered some similar rifles for the Rifle Brigade at the Cape of Good Hope.

In 1850 he conceived the idea of the oval bore as the proper form for all rifled arms and cannon; with which his name is associated. In 1852 he experimented upon the .577 pattern Enfield rifled musket, and sent to the school of musketry at Hythe some specimens of carbines bored on his peculiar system.

In January 1855 the Lancaster carbine was adopted as the arm for the Royal Engineers, and was used by members of the corps until it was superseded by the Martini-Henry rifle in 1869.

The lockplate of the rifle is named ‘Lancaster’s Patent’.

The top of the barrel is marked ‘151 New Bond Street, London’ and there is another ‘Lancaster Patent’ stamp near the hammer.

The barrel is also proof marked on its left side with three Victorian inspector’s stamps.

The trigger guard bears the name of the owner ‘H. Powell’ and its grips are chequered making it a privately purchase piece and not a regular army issue piece.

The bayonet’s bale is stamped on one side with a pair of proof marks and on the other with the manufacturer’s logo.

The brass locket of the scabbard is stamped ‘6501’.

The rifle half cocks, cocks and releases with ease.

The set is in excellent condition.

The bore is clean and damage free.

There are no traces of rust on the metalwork and no cracks of the stock.

The bayonet is very clean as well, free of damage.

The frog has the minimum age wear and remains excellent.

In our community section
More about this: Most Popular Bolt Action Rifles for 2021
Display map