When looking for a new airgun, most people will think of buying a PCP especially as the prices have come down in recent years thanks to Crosman/Benjamin and more so the Chinese made products. That's for new kit - for secondhand you can find some real PCP bargains. Taking a look here on Gunstar, there’s a wide choice of both. So why bother with a spring powered airgun then?

Surely it's more than just nostalgia for those who started out on an old Meteor or a Diana break-barrel? A bit like ageing adults rediscovering motorbikes from their more youthful days perhaps.

Things have advanced today much more in the Pre-charged world than with the plain old single shot break barrel springer. So why is it still so popular and why do people return to these after years using PCP's? It takes time and skill to learn to use a springer. This is to all intents and purposes totally lost when using a pneumatic. Point, squeeze and shoot; after twenty shots things can get a tad boring.

A springer however, demands a more in-depth approach to shooting if any degree of accuracy is to be expected. Rest the barrel against a fence for a long shot and the spring release can throw a pellet off target with the hard recoil. Likewise grasping the gun too firmly to control recoil as the pellet leaves the barrel has the same effect.

In the 80s the gas ram tried to re-invent the springer and it worked to a point. It was a very inventive idea to use a strut in an airgun. The gas-ram has been seen again recently in a lot of new springers. The same principles apply to a mechanical power source held under tension. On release the awesome forward and reverse momentum are the same as with a long spring and piston. Certainly they’re smoother to use with no spring coils twisting and grabbing against piston walls. Self contained and with less need for greases, less opportunity too for these to penetrate forward ahead of the piston. Less dieseling as a result where the greases ignite under pressure ahead of the piston as it travels forward, should mean an easier to use 'springer'. However the simplicity of the good old fashioned spring in a cylinder tube airgun simply won't go away.

Learning to hold and use one takes time and who wants to be in a rush anyway? Sitting for a few hours working through a tin of pellets on a range is the perfect antidote to a week of stress at work. There’s also something wonderfully satisfying when preparing a springer for use. An old rusty gun or a friend's broken rifle from 40 years ago may need attention. Choosing the correct spring and the greases to lube it lightly, cleaning out the internals, polishing the cylinder, then reassembling everything back together after replacing the piston. Making sure everything is in order gives a real sense of satisfaction. All this work is within the capabilities of the average airgun user with some basic tools and some common sense.

This was certainly the case before today's 'elf and safety' brigade making claims you can't do it yourself especially when some less experienced gunsmiths may not have  re-sprung an airgun in a long time. A good airgun friendly gunsmith is certainly worth finding. At a higher level an air-gunsmith or engineer can remake parts such as the airgun's piston to seriously tune an airgun - a real bonus. However, basic maintenance and servicing was always achievable at home and a big part of the hobby. There’s a lot to be said for some basic common sense. If none, it’s best people stay clear of airgun repair and servicing totally.

For the average airgun owner, even one new to the hobby, with some tools in a garage workshop or garden shed and some of that common sense, there’s enough information out there and online to learn the basics of maintenance and repair. Investing in a chrono is a must to keep things legal and also to assess the work after finishing.  Running an airgun in afterwards, that's using it purposefully to bed all the components in, will soon give an accurate picture if the service was worth the effort or if further work may be needed perhaps at that gun shop. Finally when all is done, there’s nothing like the anticipation of that first shot after a rebuild. Walking out on a permission or visiting the club range with an airgun that was once a clunky nightmare but is now running sweetly is really satisfying.

Of course, people can go and buy brand new. Out of the box it'll work okay but spring airguns improve with use and no expert can do this for you. With most airguns being pellet fussy, time and effort running the gun in can also be used to find the best pellet for that airgun.

Many springers today are of the simple break barrel type. Breaking the barrel open with the barrel now left to sway about isn’t the best start to a safe loading procedure. Guess what happens if the sear slips or the safety fails? That's a fast trip to the hospital to sew fingers back on. Depending on the gun's design, breaking the gun open may be enough to reveal the barrel breech for loading before cocking the action fully. Others prefer to load whilst maintaining the grasped barrel downwards, never letting go of it until it's locked back up shut. Safety buttons or switches are simple mechanical blocks and should only be used as a back-up to that weird thing mentioned here a lot, that’s a crucial part of playing with guns - common sense.

Springer airguns of yesteryear could be very different designs, fixed barrel underlever guns or the side lever actions of the 1970s and 80s. Wonderfully ergonomic Hammerli, Sussex Armoury and Webley's for example. A tap loading side lever cocking Osprey, Tracker or Jackal can be eye opening to those new to springers. Some earlier guns even had no safety mechanisms, shock horror! Remember that constant reference to common sense? A serviced pre-War BSA with its tap loading and fixed barrel underlever is a total joy to go shooting with yet made for nearly 40 odd years none had any safety fitted. The underlever is pulled down to cock the sear and without releasing it’s then returned under full control, with no possibility of losing digits and then the gun is loaded with all attention given to avoiding  the trigger. This fixed barrel underlever design stayed the course and was used on many later airgun designs with BSA Airsporters and Superstars taking the idea to a higher level. Think springer when visiting the local gun shop or browsing here on Gunstar. A springer even smells better than a PCP… really it does!

Once many springers were made this way – the classic sidelever

Jonathan Young
Writer
Published on 10-08-2020
Started out very young with cap pistols, progressing to archery and this developed into a real interest in studying older weapons. Air weapons followed and it's been the Airgun that's drawn me deeper into shooting more than anything. The sheer variety of different types available is unparalleled, from bb guns to replica pistols, from rusty old springers to high-end target rifles. It's impossible to get bored! Add a dash of patina and you gain entry to the wonderful world of Vintage Airguns. My very first air gun was a £35 diecast Daisy - I've never looked back. 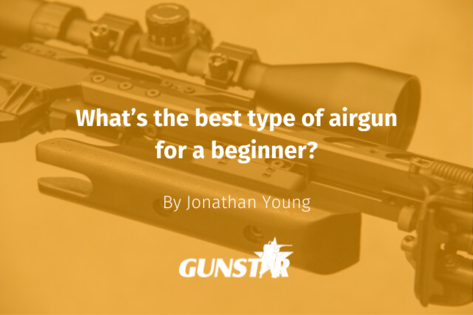