I was fortunate enough to get my hands on a friend's Daystate Huntsman Revere a short while back and managed to spend some time testing and evaluating the rifle. The Daystate Huntsman Revere is one of Daystate’s newer offerings, yet manages to retain the company lineage of the past 40 years. But is the Revere to be held in the high regard its name suggests?

Holding the rifle, I noticed it handles and feels exactly the same as its predecessor the Huntsman Regal, however, the operation is notably different. The rear bolt action block has been replaced with a side lever cocking action, and the magazine has also been changed. The rest of the rifle remains unaltered, preserving the sleek and elegant sporter hunting style rifle design. 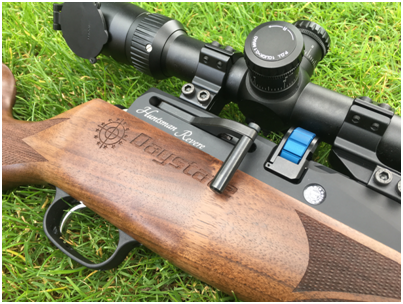 The walnut stock is no longer coated in a gloss lacquer finish, but instead oiled to reveal the grain of the wood. Designed and manufactured by Minelli of Italy. With its deep pistol and forend checkering, whilst also being complimented with the Monte Carlo type roll over cheek piece; the stock truly is a work of art. Available in both dedicated left and right-handed configurations, the stock isn’t ambidextrous. The pistol grip - although not vertical - provides the perfect hold for me and most likely other users. Complete with an indent for thumb up or thumb forward position, and the trigger and guard perfectly positioned, the rifle fits and feels just right. The pistol grip is finished off with a delicately blended rosewood pistol cap, set off by a bold white line separating the stock from the pistol cap. The rear of the stock is fitted with a ventilated recoil pad and fixed black spacer. The recoil pad is not adjustable and as most sub 12 ft/lbs recoilless rifles, pointless in its existence but a nice touch nonetheless, as it creates the illusion to both user and observer of a rimfire or centerfire rifle. 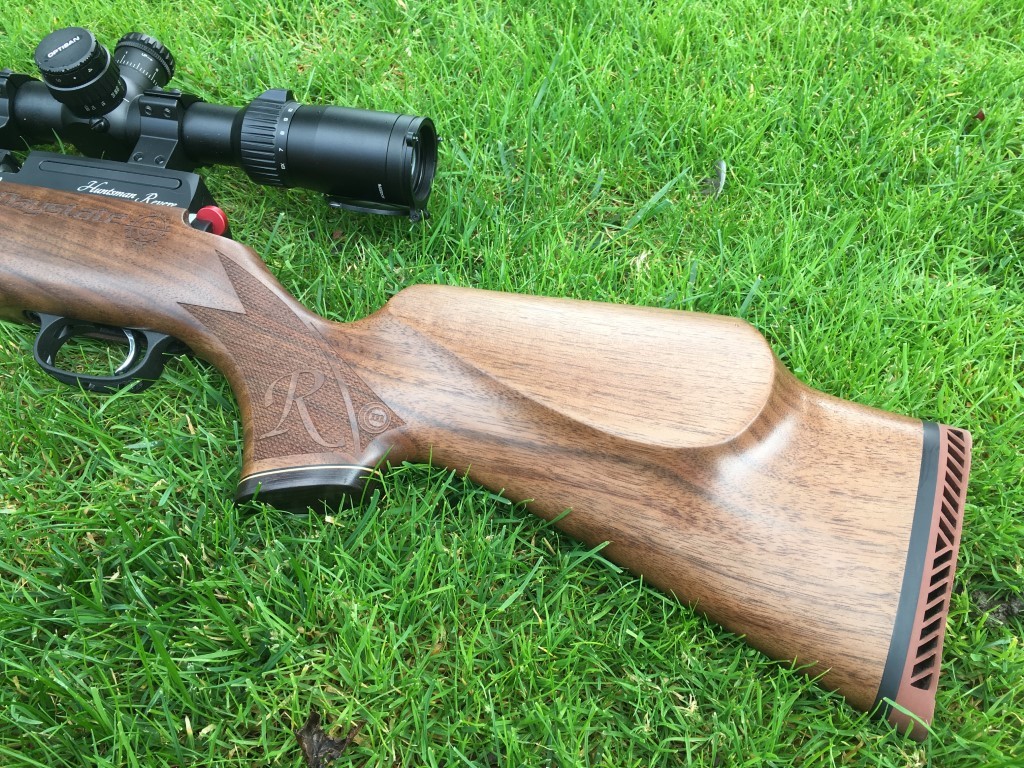 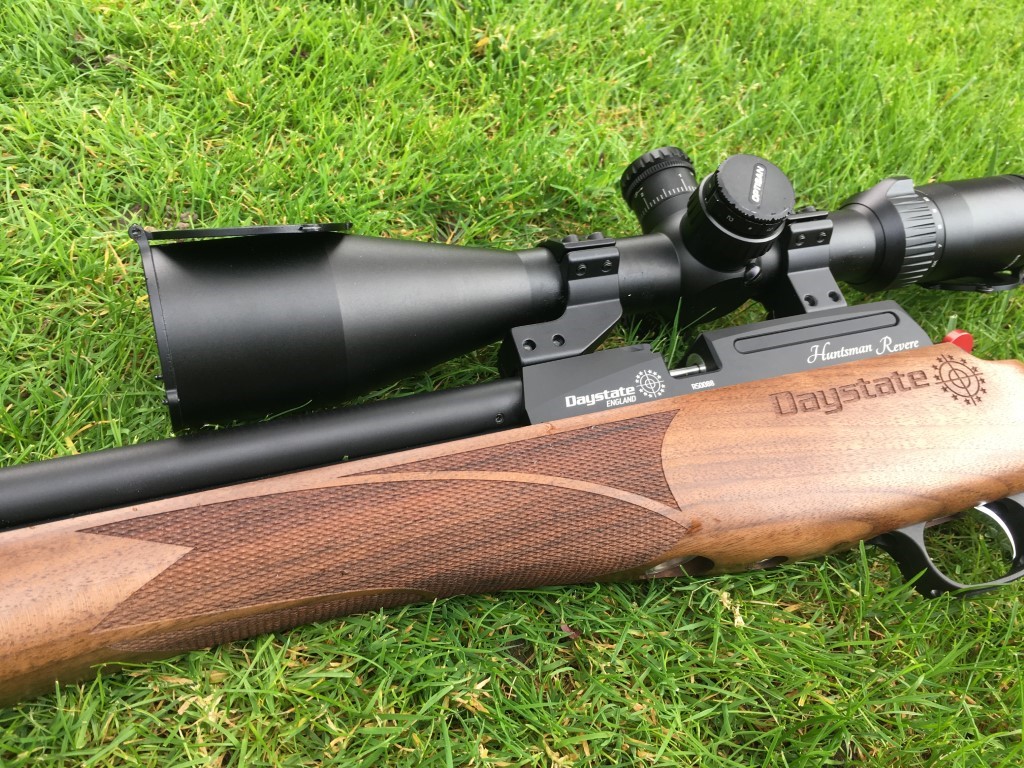 The match grade barrel is still free floating within the new matte black shroud, and the shroud end cap (muzzle end of course) can be removed to fit an aftermarket silencer. This one was graciously fitted with a Huggett Magna silencer. As a benchmark I’d say it was on par with the well-known Weihrauch silencer. The silencer finished the rifle shroud off nicely, and I’d say is a must to tame the bark of the rifle if you're planning on some back-yard plinking. 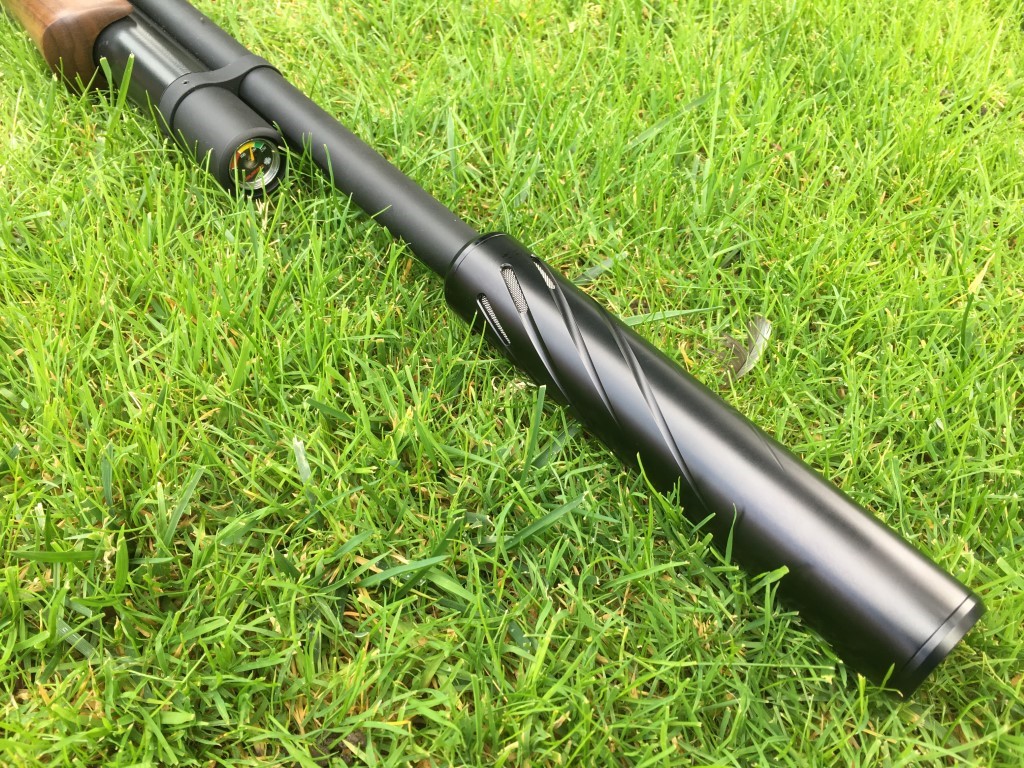 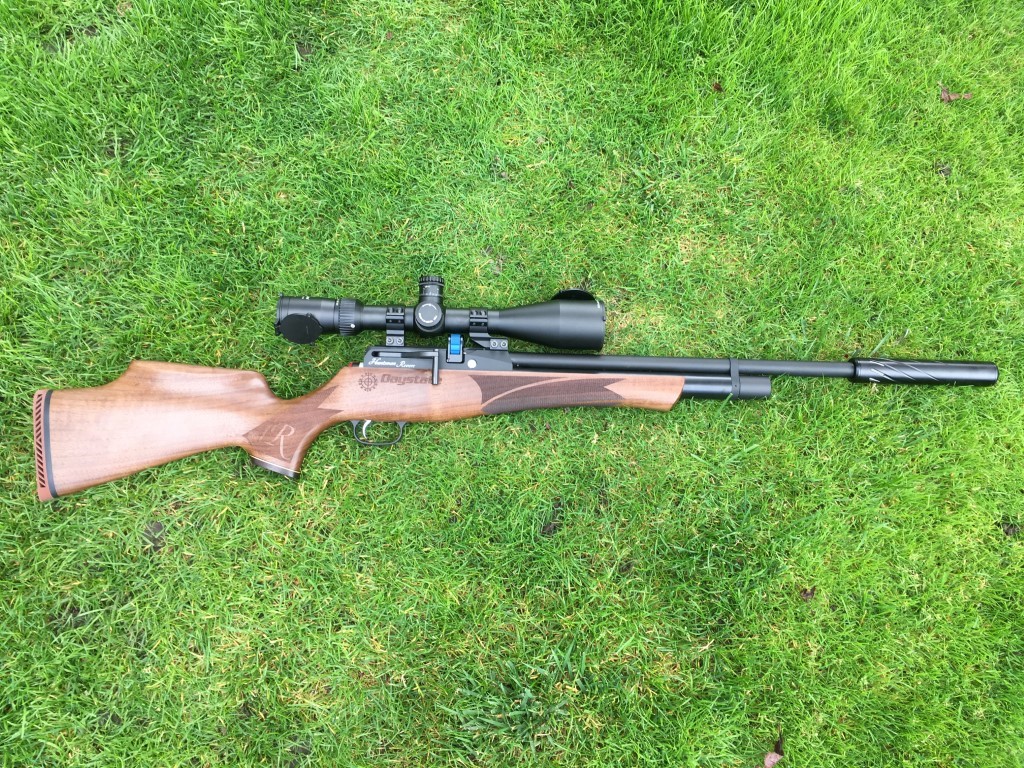 Directly below the shrouded barrel is the air reservoir - this is also finished in a new black satin or matt type finish. I must say I’m not a fan of the new black shades; I get the feeling someone at Daystate has been watching 50 Shades of Grey and is trying to incorporate every other shade of black or grey into this rifle. The reservoir tube nestles as per its predecessors, deep into the stock, allowing for a slimline, compact feel and look to the rifle. The reservoir is finished off with a pressure gauge and cover. The cover, which is again a slightly different shade of black, can be pulled off or rotated to reveal the fill hole. Daystate have replaced their usual foster type quick connect coupler fitting with the alternative fill port hole, now requiring the use of a dedicated push-in fill valve. I’ve been put off push-in valve connect charging systems ever since I experienced one pop out on me, and the fill whip hurtling upwards barely missing my face, all due to a damaged ‘O’ ring on the valve. The wear on the ‘O’ ring was most likely caused when the valve was pushed into the hole. This is a rare occurrence, but be warned, users should replace the ‘O’ rings on fill valves regularly to avoid this unfortunate incident. 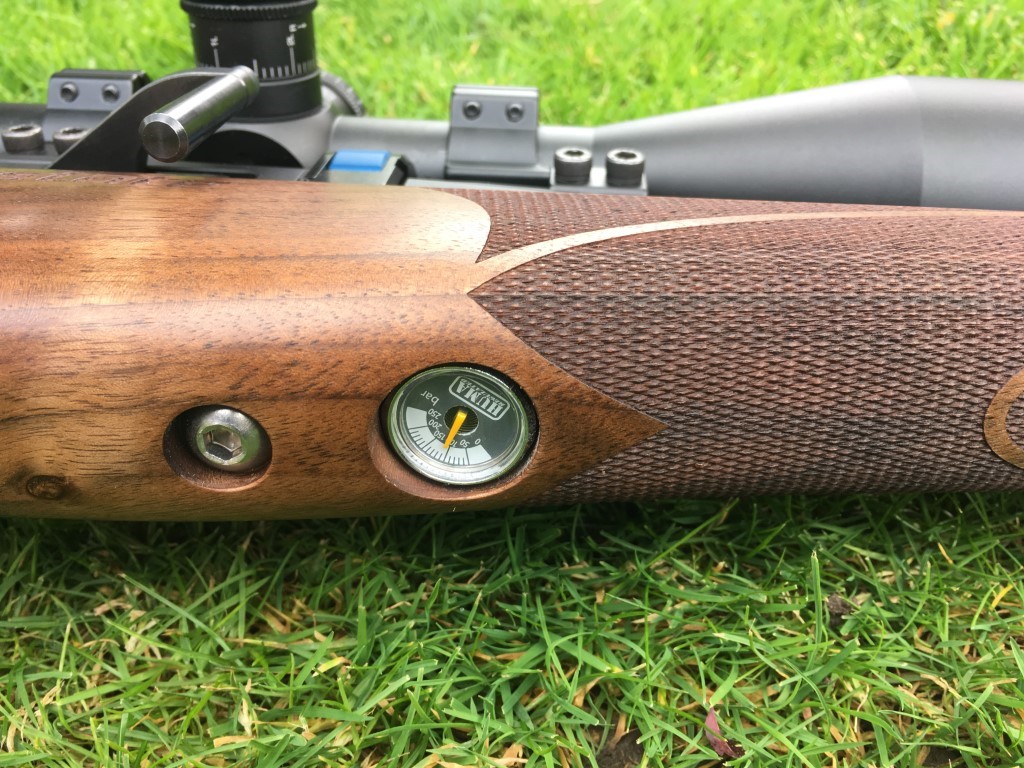 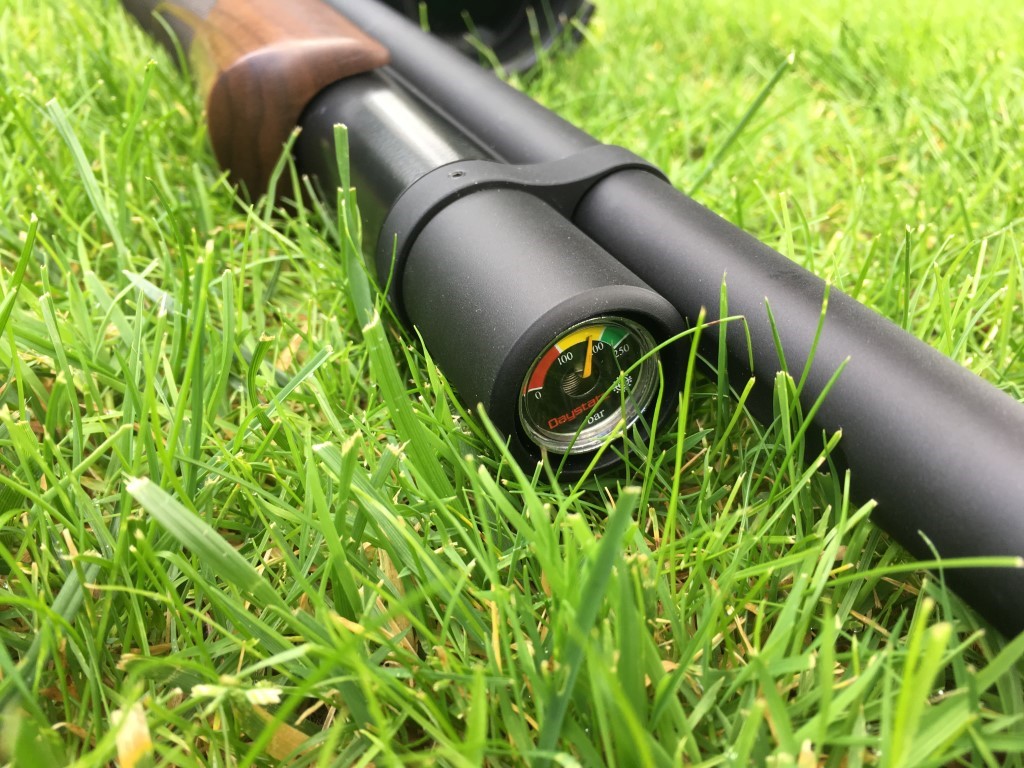 Daystate’s new addition to its rifles can clearly be seen on the underside of the stock. The new Huma Regulator and gauge sits in the previous hole designated for the fill pressure gauge. Regulators have come a long way since Steve and Joe Wilkins of Ripley Airguns UK, produced the first commercially available regulated rifles in the late 1980’s. Huma-Air have used their own innovative engineering prowess to build and supply affordable aftermarket regulators for many branded Pre Charged Pneumatic (PCP) air guns available at retailers today.

Back to the action block. The action block is the significant influential change to this rifle, and although the Revere doesn’t intend to replace the classic rear bolt Huntsman HR or other available alternatives, it’s definitely a serious consideration to hunters who will be looking to select a rifle on the basis of stealth when out in the field. The Revere removes the need for a noticeable rearward jerk of the action bolt, and replaces it with a silky smooth almost effortless pull of the side lever, that can be easily operated when in the shouldered position. The hammer spring feels non-existent when the side lever is pulled back, however I felt some slight tension on the lever until it was fully back, a click suggests the hammer is being held in position, instinctively I pushed the lever forward and felt an ever so slight resistance as the pellet from the magazine entered the breech of the barrel. The side lever action is available in both left and right-handed configurations, allowing for a truly bespoke user experience. The side lever does require a long draw back, but fortunately the biathlon type vertical handle doesn’t rotate in your fingers as this isn’t fixed to the lever, thus allowing for a smoother cocking action or aid. 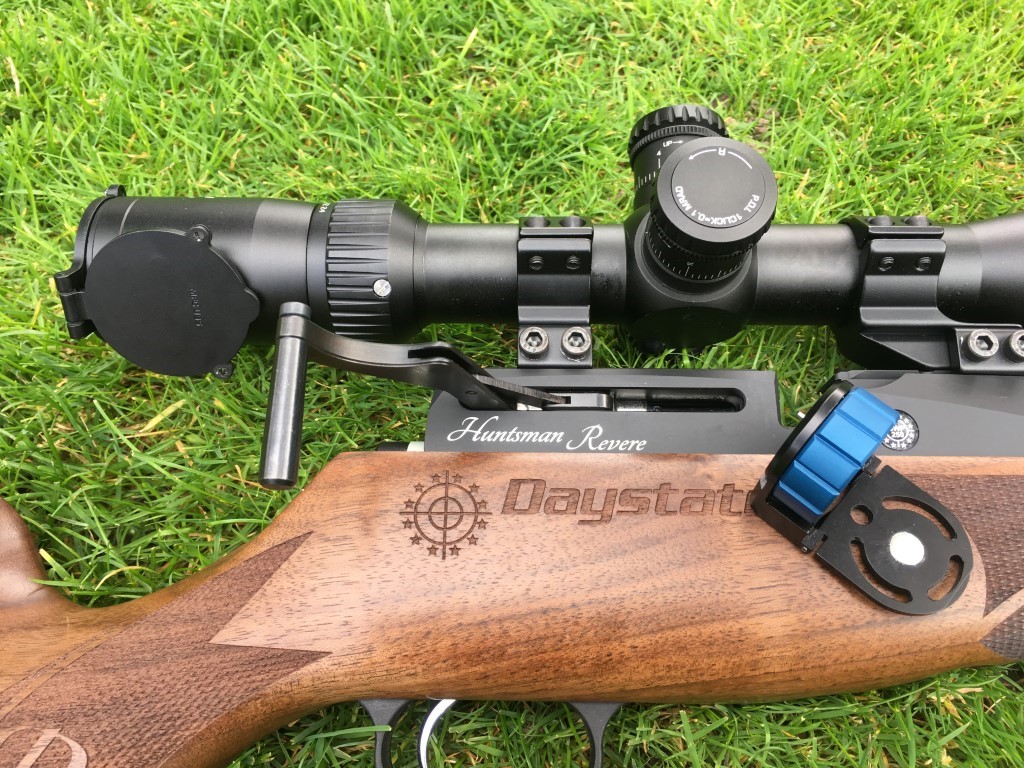 Daystate is known to invest in research and development, and the magazine is clearly something that has been well thought out and engineered. Definitely a first for me and most probably for others also. The front of the magazine has a pull down trap door, if I can call it that. The trap door is held in place when covering the drum of the magazine with a small yet strong enough centrally positioned magnet. The trap door itself has perforations or elongated holes that allow the user of the rifle to visually work out how many pellets are left in the magazine. Pulling down the trap door allows the user to load the magazine, by inserting the pellets head first into the blue drum. The new magazine is now self-indexing, hence removing the need of the indexing levers in the action that can be seen in previous versions of the Daystate Huntsman rifle. The new type magazines hold 13 pellets in .177, 11 in .22 and 10 in .25. I do like the new magazines, they’re intriguingly different, functional yet simplistic in design. Unfortunately, older style Daystate multishot magazines won’t work in the new Revere, but on the plus side some other Daystate Air rifles, such as the Huntsman Regal, Wolverine and Pulsar will accept the new magazine. The magazines are also dedicated right or left-hand loading, the position magnet and indent pins can’t be removed and relocated to allow for either left or right-hand insertion into the action. The action also uses the standard single shot loader, that also accompanies the rifle when bought new. 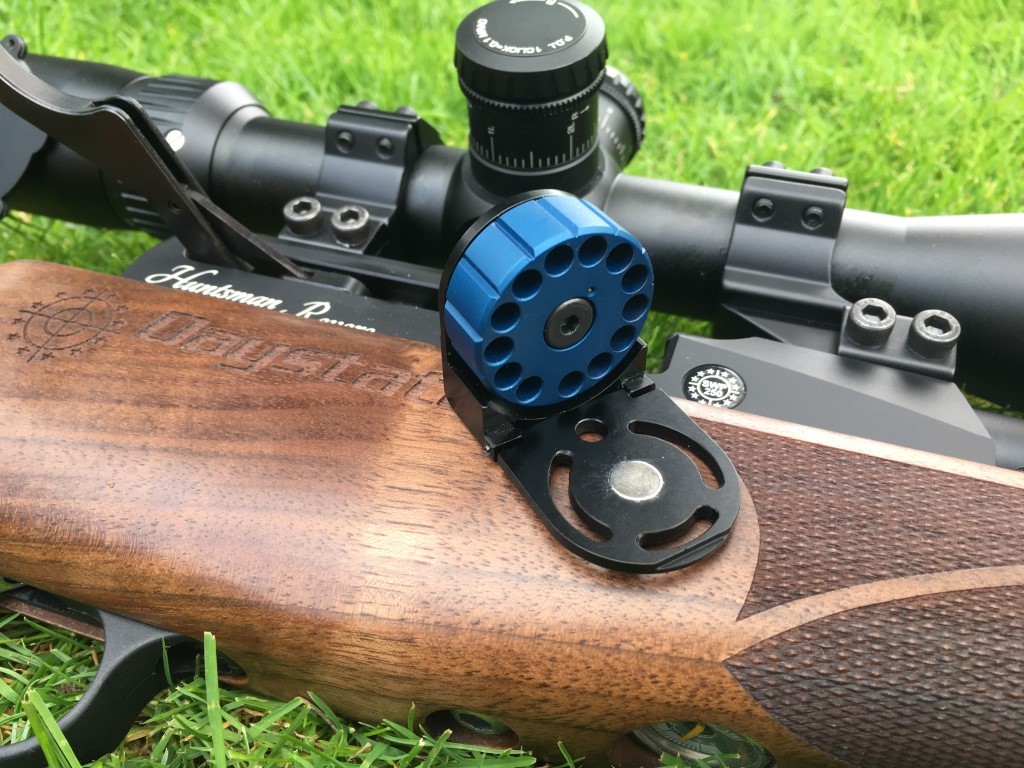 On test, the Revere is as accurate as they come. The two stage adjustable trigger was already set just as I’d normally have it, with a small first stage creep, followed by a clean crisp second stage break. The cocking lever action is quick and easy to get used to, however one thing that did bother me is the likely possibility the rifle can be double loaded. So be warned if you forget you’ve already loaded a pellet, pulling back the side lever will index the next pellet allowing the user to put an additional pellet in the breech. My friend and I took turns to shoot the revere at paper targets, using various sizes and weights of pellets, in an attempt to work out which pellet best suited the Revere. We also took the opportunity to use the FX Chronograph to determine the power and efficiently of the regulator. Both chronograph test results and shooting results can be seen in the images below. 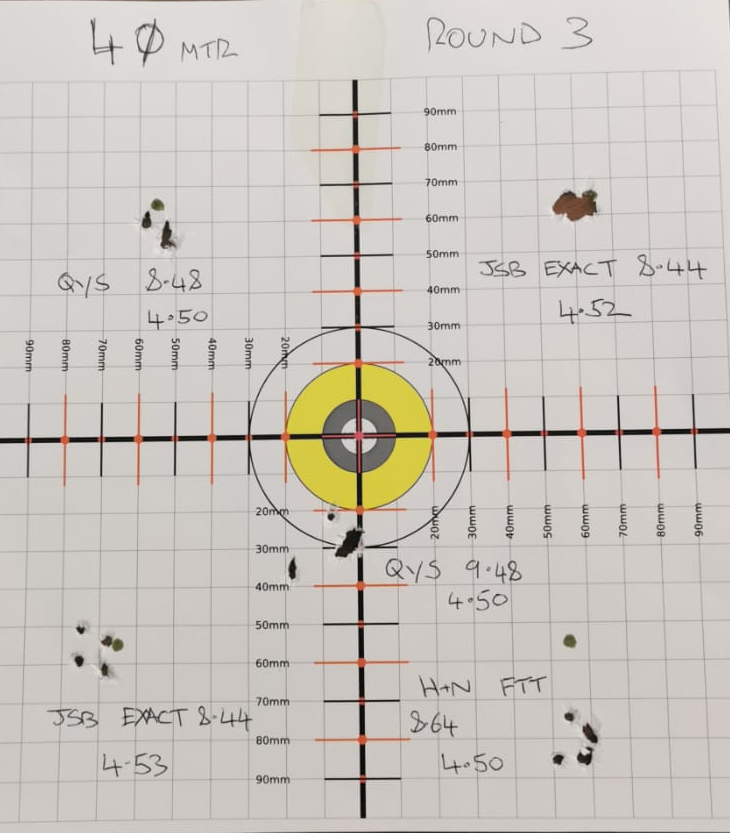 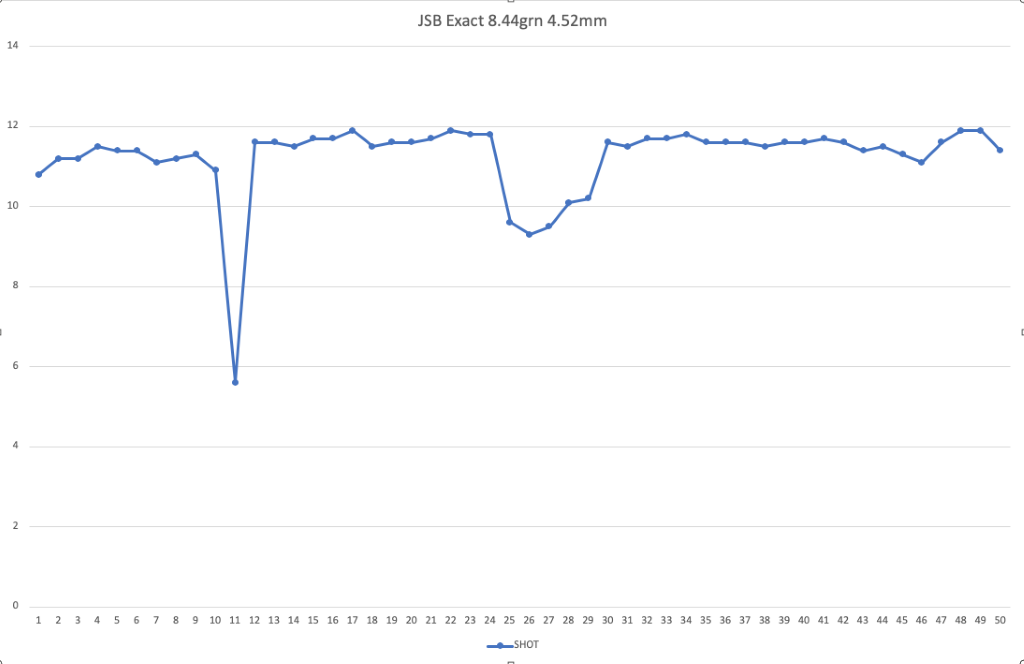 Although the rifle was shooting with a flat power curve, I was surprised to see the large fluctuations. I would suggest the anomalies were either caused by bad pellets or the rifle itself. The rifle was new and straight out of the box and most airguns need time to bed in. Recording the 50 shot count, the Revere managed a low of 5.6ft/lbs and a high of 11.9ft/lbs, with a spread of 6.3ft/lbs, an average of 11.1ft/lbs, and a standard deviation of 1.4ft/lbs. As shot testing continued throughout the afternoon, we determined the rifle preferred JSB Exact Diablo 8.44grn 4.52mm pellets.

The new Daystate Huntsman Revere has been on the market for some time now, and the new Revere is no way produced to replace the classic rear bolt operated Huntsman Regal, but instead offers shooters who prefer the classic sporter rifles a choice between a side lever and rear bolt action. I won't however be rushing out to replace my Huntsman Regal rear bolt rifle for the new Revere that retails at around £1069.00, as there are many alternative side lever Rifles that perform just as good if not better and are considerably cheaper. I’ve always been a fan of side lever action air rifles, but for me the Revere still has a long way to come before I’m tempted to add it to my collection.

As always, I hope you enjoyed this review, shoot straight, and shoot safe.

All the best, Ray Hussain