For hundreds of years, most common powder firearms were muzzle loading and needed a ram rod; literally a big stick to force everything down the barrel. A fabric patch or wad, grease and a separate special tool to hammer the ball into the muzzle were all part of the kit bag before you got to use the rod, and remember all this for only one shot.

From the very earliest times, however, skilled gunmakers were able to let their ideas run free. Multi-shot flintlocks with hand rotated, pre-loaded cylinders existed centuries before modern revolving guns. In this rarified realm of specialist gun making we see other forms of pre-loading such as screw threaded turn-off barrels allowing easy loading from the rear - and no awkward ramrod. Then proper breech loading, fed with paper packets or refillable metal cups containing ball and powder that resembled our modern cased ammunition. Scanning the listings here on Gunstar, you can sometimes find amazing early treasures. Most believe that breech-loading dates from around the time of the American Civil War with the transition from loose powder guns to those taking shelled or cased ammunition. The reality is - between marrying his eight wives - King Henry VIII loved his breech-loading matchlock powder musket that ate big preloaded metal canisters . The time difference - Henry died in 1547.

What’s all this got to do with Airguns? Match skilled gunsmiths with ideas to people with money and what do you get - fantastic airguns! It’s time to delve into the exciting world of Pneumatica Antiqua. It sounds like some rare disease and yes, once you catch it you can't stop thinking about antique airguns. 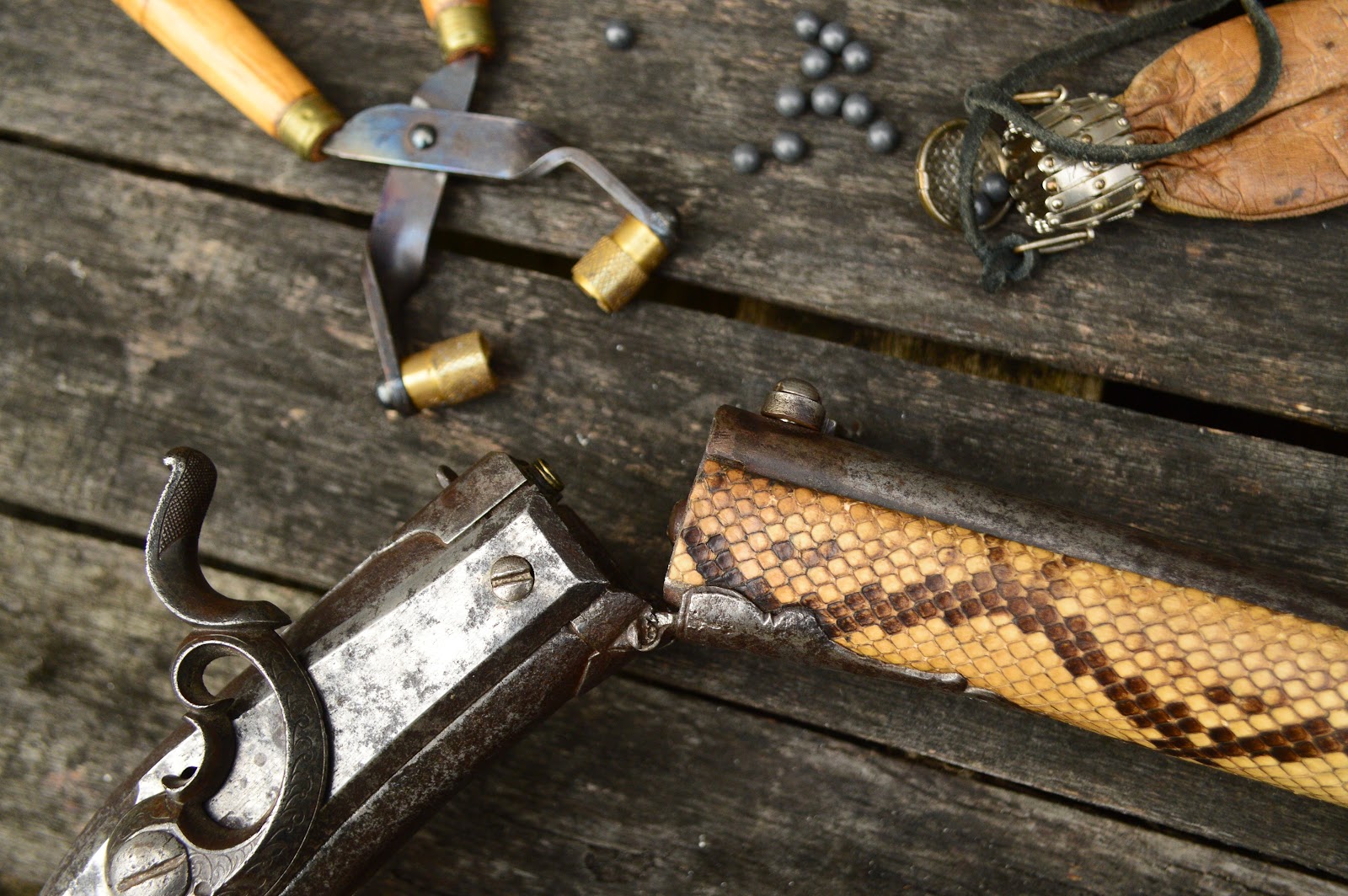 This weapon turned up looking weary with some parts missing and possibly a shortened barrel, but it still screamed quality and it had one very unusual feature. Ignoring the exotic covering, it had a hinged break open barrel for loading. This is a feature of exceptional rarity in early firearms.

With the advent of early pneumatica, many used the same parts as powder burners where, with these, the moving parts were mounted on the lock plate forming a self contained removable assembly for easier servicing. Being so similar some airguns were also used with gunpowder. Needing less of these features, many later airguns then lost the powder pan and the frizzen, then the top jaw and its screw for the small piece of flint to make sparks. Things simplified to the trimmed down cocking hammer that we see here.

Note how small this gun is when comparing it with any other firearms and early air weapons. Weapons do surface on rare occasion that were clearly made specifically for a smaller individual - a female shooter, an adolescent or a child. The barrel on this piece is only 423mm and the whole gun less than 86cm long. It was common to chop and refinish damaged barrels to a shorter length with use, but this muzzle is slightly flared or swamped which was common on early firearms before 1800 and the barrel still has the original lozenge foresight set back 9cm, both proving that the short barrel is original. 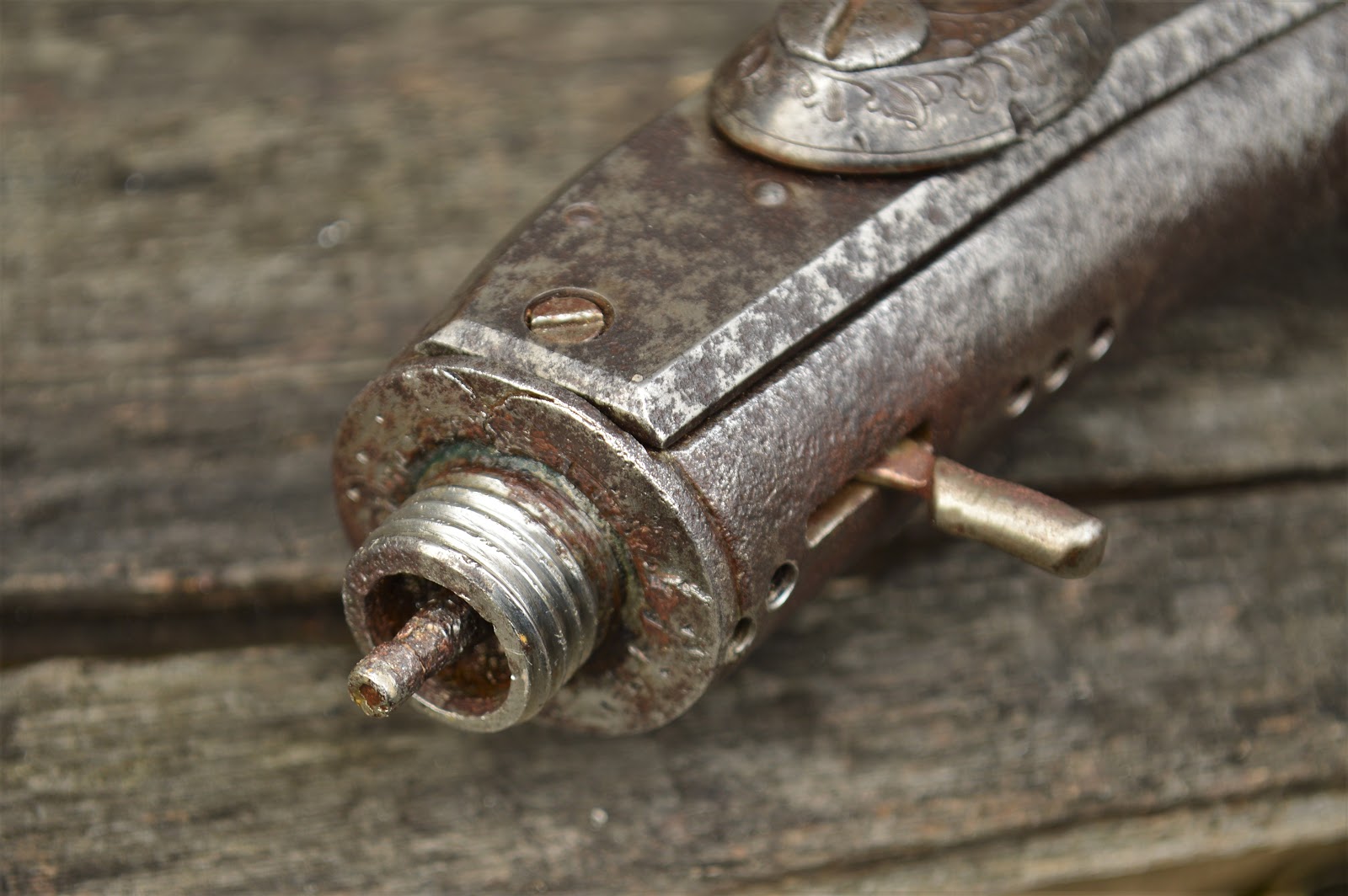 The muzzle looked rusty but on examination, there’s actually a browned copper lining. Oddly something appeared to sparkle around the underside of the muzzle rim. Under a hand lens some small flecks of bright gold are still present around a very faint, squared off depression. It appears that the muzzle once had a decorative gold band or ring fixed to the steel at this point. The copper lining is slightly flared from 10mm internally to 11mm at the muzzle, but this may be due to wear on the softer metal with each discharge. At the other end, the barrel opens after unlatching the securing clasp that swivels freely on a threaded bolt and the barrel swings down on a simple hinge. The slot to the bolt head has been opened widely into a V shape for use as a rear sight. The exotic covering to the forend appears to be snakeskin, wrapped over thin timber and pinned by a steel cover at the muzzle, with a more decorative steel fitting to the rear forming part of this hinge.

The end of the brass air transfer feed protrudes from the action face directly into the barrel breech when shut sending air into it rather than just to it so creating a better seal. This may also have seated the projectile on closing. There’s also enough of a flat recess here to have had a thin sheet of leather for added sealing. Opposite on the barrel's hinge-plate there’s a brass tube loading port of about 6.73mm o/d and about 3cm long. 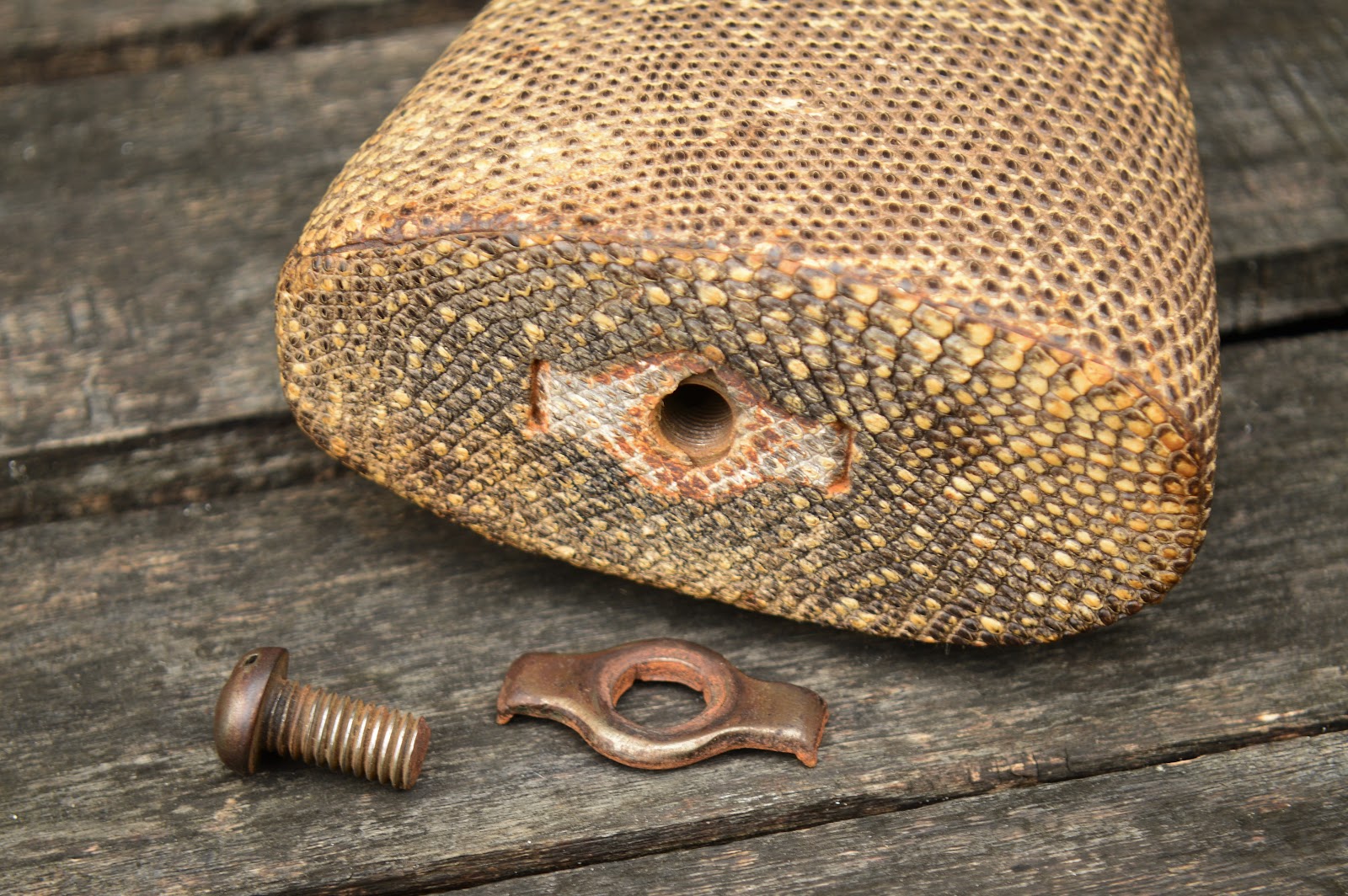 The only decoration is to the cock hammer with its fine scrollwork and finely engraved anti-slip chequering panels to aid grip. Despite its unusual style, many gunsmiths would use batch castings so the possibility of seeing similar may exist. The trigger guard was absent revealing a number of additional holes indicating many later replacements were used as running repairs. It’s possible that one hole may have been used for lubrication. A suitable replacement guard was sourced in keeping with the piece. The lock mechanism is intact and working with a very strong spring and the method of operation with the retracting valve pin indicates the capability for multiple shots. To the left side is a switch or bypass safety.

The covering to the stock appears to be from a different reptile; possibly lizard. Having failed a magnet test any lining to the stock isn’t steel or banded iron. This then was filled to a lower pressure, or the original valve had a small in-built reservoir allowing a limited number of safer high power shots. There’s a large steel bolt threaded into the shoulder butt with a bracket or footing to the base. This resembles those airguns where the stock has an internal pump rod releasing out to which a crossbar would then attach for pumping. However here the screw and bracket can be removed; revealing an inner threaded steel housing ending in a narrower hole deeper inside. Therefore an external pump would’ve been fitted here, using the steel footing to prevent damage to the surrounding. With any crossbar used as an anchor or footrest to stand upon the gun would have been pumped up and down onto it. It’s strange however that the whole butt removes from the action which on many guns would indicate filling from that end and this may have been the intention for a later modification. 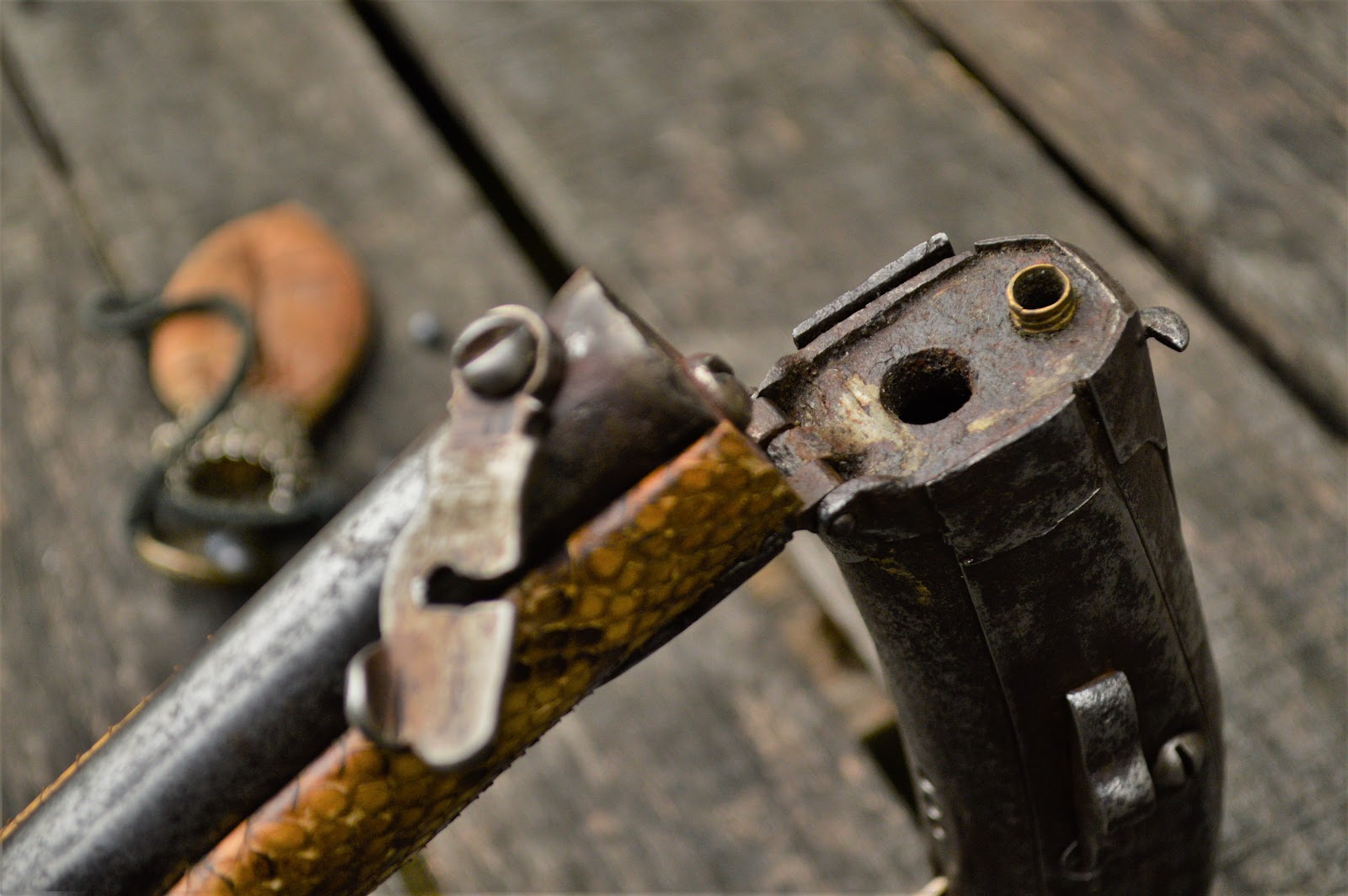 Due to the manner of construction and materials used, it's a good guess that this may have been used if not designed as an air-shotgun. Whilst hunting is an obvious purpose, specimen collecting for scientific endeavour was popular. Later some Giffard Co2 guns appeared as air-shotguns taking card tubes filled with tiny grapeshot and similar packets could’ve been prepared easily for this gun. Very probably this also had a removable barrel liner for lead ball which was once a common feature.

Period gun makers associated with break open weapons, either for air or indeed powder are very few indeed. It’s known that the London gun maker Dolep after arriving from the Netherlands made unusual weapons and the late writer and collector Keith Neal noted that he made combination airguns like the Wentzlau. A few years ago the auctioneers Bonham's sold a pistol by Dolep, a flintlock powder pistol that was a break open at the breech and tip-up barrel design which had reusable brass canisters for pre-loading powder and ball. It appears that this idea continued over the years and a later and lesser known name is Fecht from Germany who is known for making a breech opening weapon, an interchangeable butt reservoir airgun.

However one gun maker associated with the early airgun has stood out -  Staudenmayer. Remember the unusually shaped hammer? A small number of Staudenmayer's later airguns made in London have similar hammers either semi or fully enclosed into an ovoid shape. The general style of his airguns is also similar to this piece - functional and slender, lightly wooded and only to a minimum, with all-steel actions and on occasion exotic skins used for adornment. With these pointers in mind and hiding that its a real bug that most Staudenmayer are heavily engraved and signed, let’s offer the suggestion that this airgun with minimal engraving and no signature is by him or as people say ‘after’ him, i.e. from his workshop and finished by a colleague.

This piece may have been adapted to special customer order from one of his designs. The simple hinged barrel could indicate this, as another Staudenmayer trademark was interchangeable barrel airguns. A cased set by him turned up in a European auction with two barrels, one rifled and the other in smaller smoothbore and then another similar cased set turned up in Denver back in 2012. In addition, on that example the stock reservoir was covered almost identically to that here but in more common shagreen or sharkskin. The possibility of a simple removable rifled liner on our piece for ball ammo suggests that this was sold without a second barrel assembly unlike his known work. It was clearly made especially for someone of small stature and perhaps this was considered unnecessary. 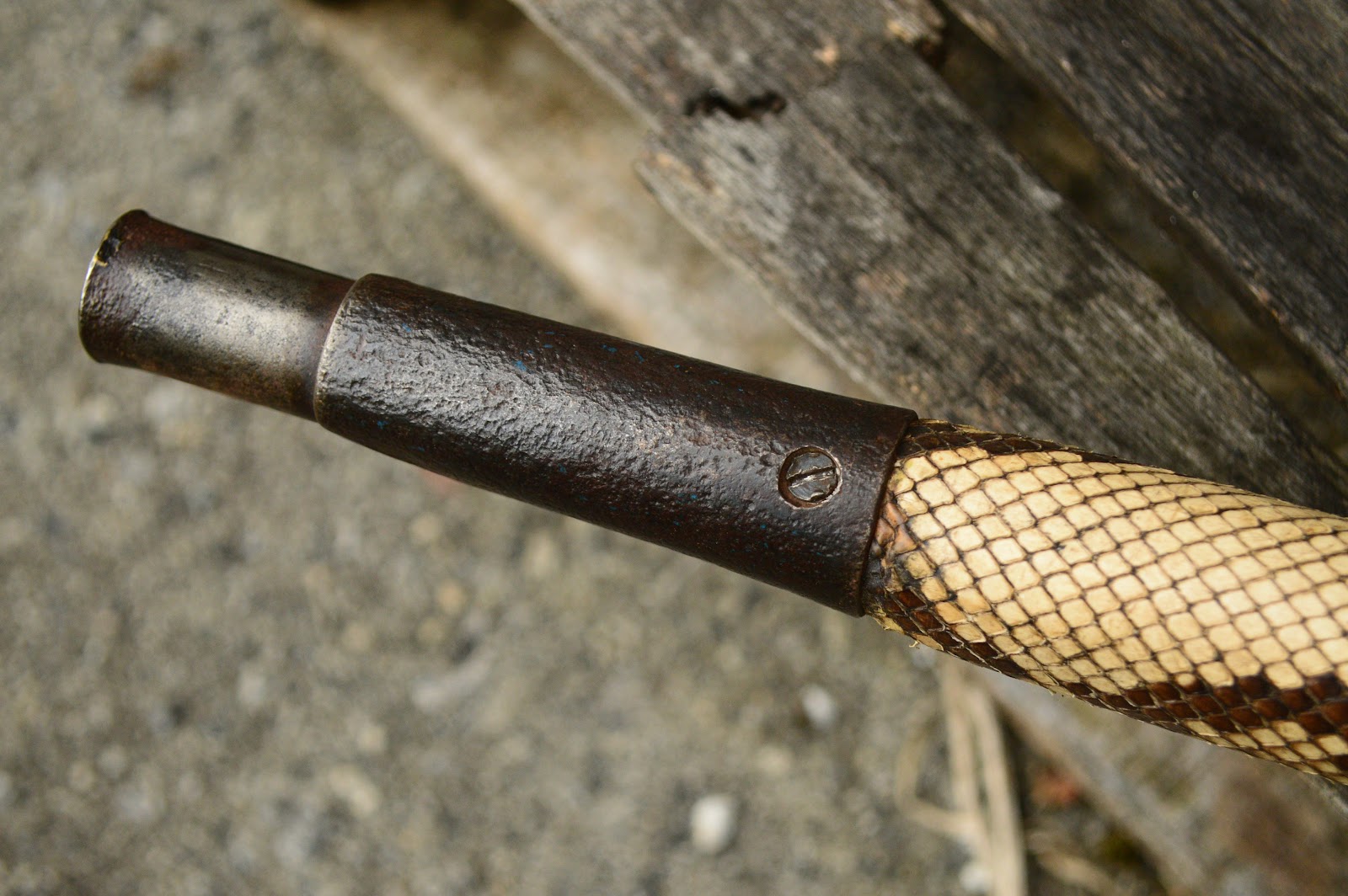 Due to the specific and unusual use of reptile skins as a covering, it’s possible this was commissioned for a visiting foreign customer. The steel forend plate and the decorative hinge plate might exclude the possibility that this was covered later in country by a native craftsman. It’s easy to suggest that the Asian/Indian subcontinent was its intended destination if this assumption is correct. So much of Britain's early efforts were spent in the many small states and principalities there that would later form India. British Colonial history and the use of trade as a political weapon saw smaller vassal states given special favour in return for promises of allegiance and then left to run as autonomous entities within the new Empire. 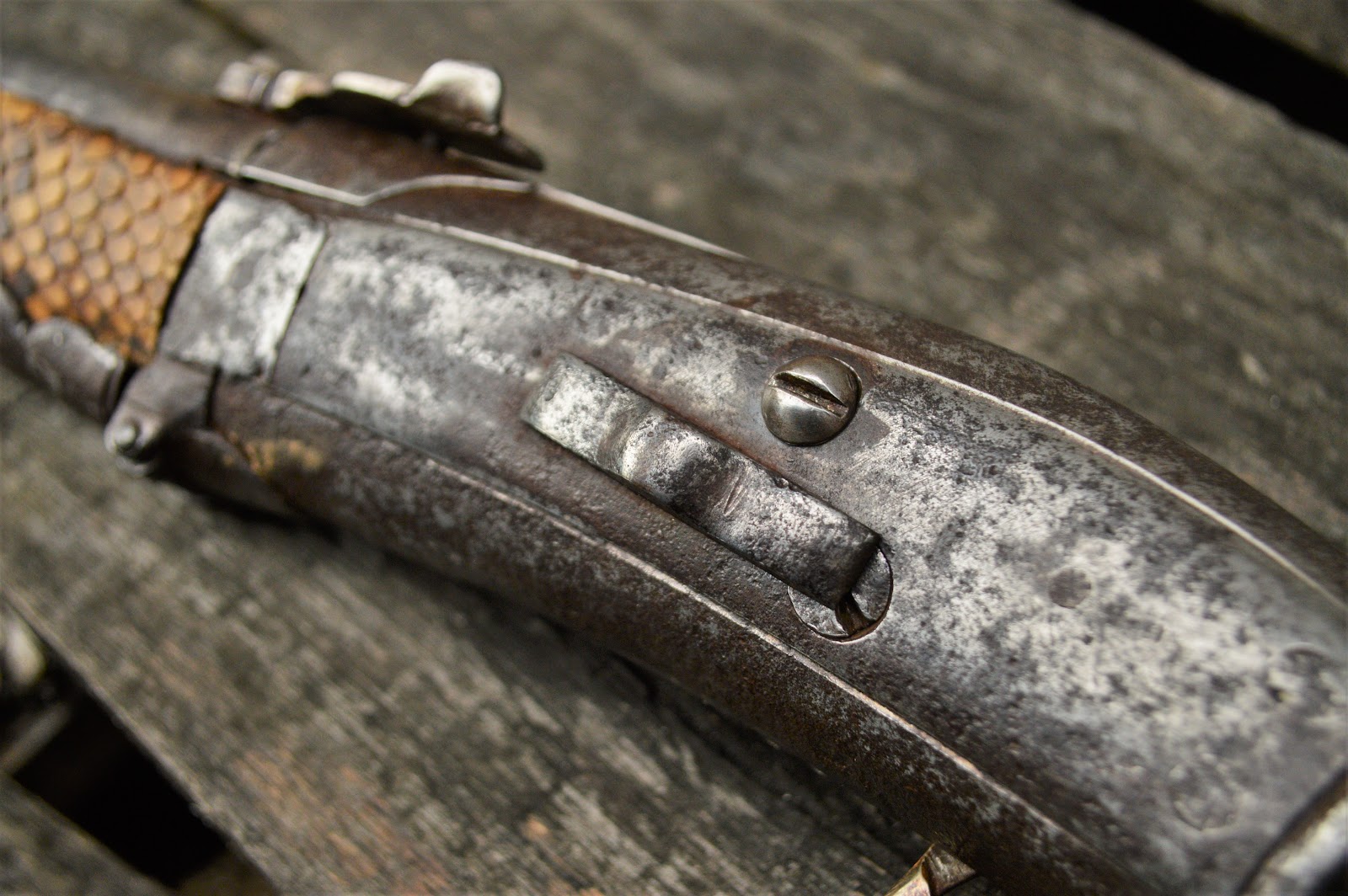 In summary then, although period break barrel weapons of any form are exceptionally rare, the style was not unknown. This piece without any additional engraving but with exotic skins, its short length and weight all indicate this was made especially for a female shooter or a youth and this was possibly a gift or presentation piece. A special gift for the son of a Maharajah perhaps – well who knows! After owning this piece of airgun history for some years, it’ll soon be time to let it go to a new home, so keep visiting the Airgun sales section here on Gunstar… 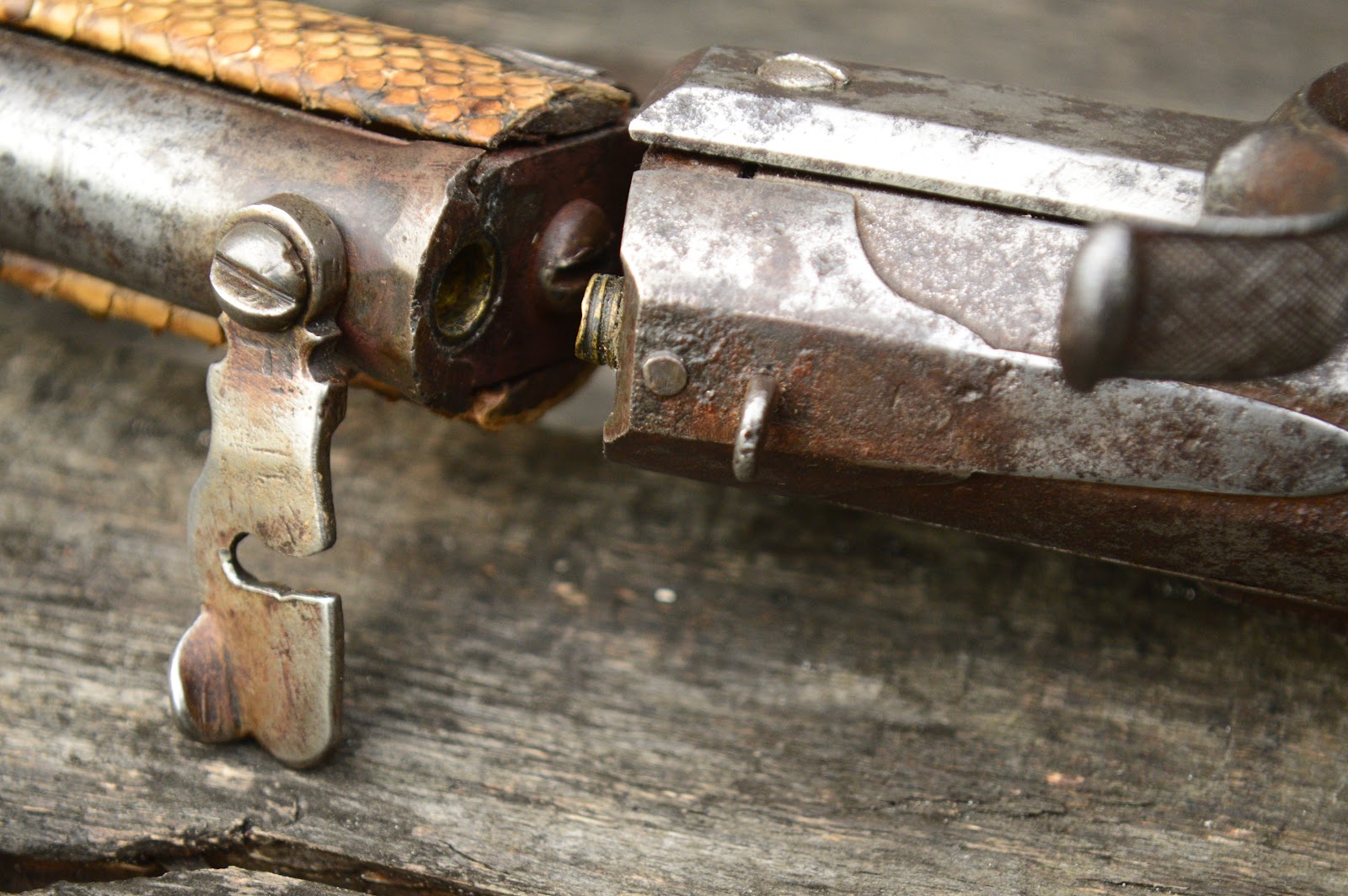