Generations of people have grown up with the lightweight accurate pneumatic pump-up airgun. The beauty of the multi-pump is its’ simplicity. Cheap to make, reliable and affordable - it’s been a go-to favourite especially in the US and even UK airgunners fell for the pumper-upper in the 70's and 80's. Yet all that pumping for only one shot?

Over the decades, some attempts were made to re-invent the design to store air for more shots as in the vintage 1940's Benjamin Super 25 with its small integral reservoir or much later the customised Crosman specials by Whalley Limited of London in the early 80's. However one idea was to have a pneumatic that charged to more effective power with only one pump. This is what we identify as the true Single Stroke Pneumatic.

Actually the idea was not that new, as Webley in Britain had made prototypes for such an air rifle in the 40's to a design by an engineer named Boyle that had a swing out arm under the barrel. Then in the decades that followed the SSP appeared slowly in air pistols and again in air rifles, but as low power match target airguns such as the Gamo Match rifle. Despite all the premium associations, power was still limited. The idea was used more in affordable air pistols like this author's first, a Daisy 717. When it came to full power adult size air rifles there was little development.

The term ‘full power’ can be misleading, as fullest power legally allowable is more accurate. In the US there’s seldom any power restraint yet it was in the UK where there was a long tradition of airgun hunting with also power restrictions that the SSP developed. Making the SSP work better than a mere plinker with high enough power for hunting at 30-40m and yet still be under the legal power limit was a specific challenge met by very few specialist engineers.

Simplifying things, in 1970's Britain choice was limited to either a springer or American - Japanese pneumatic multi-pumpers. Co2 was out as for some barmy British reason it was for a long time only available on licence until the late 1990's - so few could even consider it. Pre-charged pneumatics were appearing slowly but at stupidly high cost into a new unknown market. There was a real niche for the Single Stroke Pneumatic and this developed from the late 70's onwards ushering in a golden era.

The name John Bowkett is forever associated with airgun design and he was involved heavily from the outset, making his own bespoke SSP rifles and also pistols from his home workshop. Later his association with Titan Developments saw the release of the astonishing JB1 which also offered easy calibre swops. That’s like ermm… a Star Trek ray-gun appearing in a world of slingshots.

The barrel assembly on the JB1 is an inner rifled barrel held inside an outer tube that pivots on the front assembly. The barrel can be slid out from the tube after releasing a small double-ended sleeve that having a threaded end also serves as a shroud fitting. Wonderfully simple to load - the barrel unlocks by a collar and literally swings out. The valve needs to be set before charging via an unusual valve cocking mechanism consisting of a button located at the rear end of the action that’s pushed in, then rotated and locked. The charging arm is released by a simple latch and is then extended out fully. Closing it and compressing the air into the valve is straightforward and whilst the arm is long, resistance is felt gradually as you return the arm towards the end of its cycle and its resting position. Then the valve button is let off when on aim, so doubling as a thumb operated safety. Variable lower power - for say indoor shooting - can be achieved by simply releasing the arm to any distance first before setting the valve button.

To avoid adjusting power for each calibre, the JB1 was designed to produce maximum power in the biggest calibre available at the time in the UK and subsequently each calibre down resulted in a drop in power. To power freaks that argue over FPS variation that’s odd but it’s actually very smart. For the target shooter who only needs consistent adequate power in their usual 10m comfort zone you had .177 which, by some strange coincidence, is the calibre most used for target shooting. Originally the design allowed for .177, .20, .22 and .25 for fullest UK power. In blued steel the JB1 is heavy but compared to some later SSP is surprisingly easy to charge. Changing calibre? Light years ahead of its time and who cares if there’s an FPS differential between calibres. A wonderfully eccentric and very British air rifle.

For their second SSP called the Mohawk, Titan went for simplicity. This was a streamlined design which came in either .177 or .22  and shared components with one of their pre-charged air rifles called the Manitou; saving on manufacturing costs. 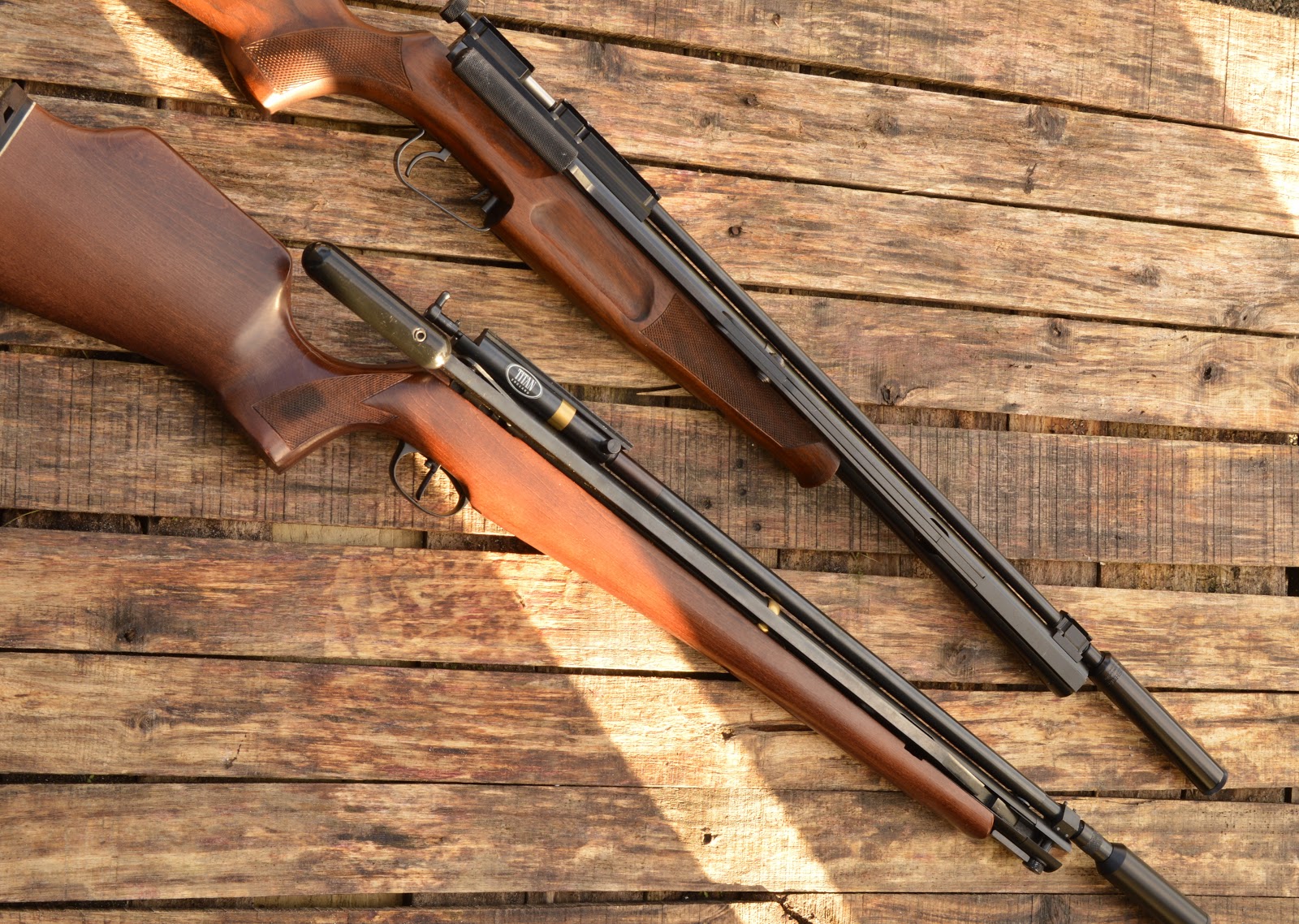 The valve is cocked by a Manitou-style side bolt, the arm released then extended and the gun charged. Oddly, this airgun was found harder to charge than the JB1. Variable lower power came as standard with a long sticker applied to the stock showing what power to expect at the point the arm was placed. The Mohawk found its home in field sports where it was used to good effect as a hunting tool. If the user can charge the gun without hesitation then the Mohawk will prove a reliable robust airgun. A rarely seen two or three stroke version exists which was a welcome option and also a full multi-pump version available on licence. 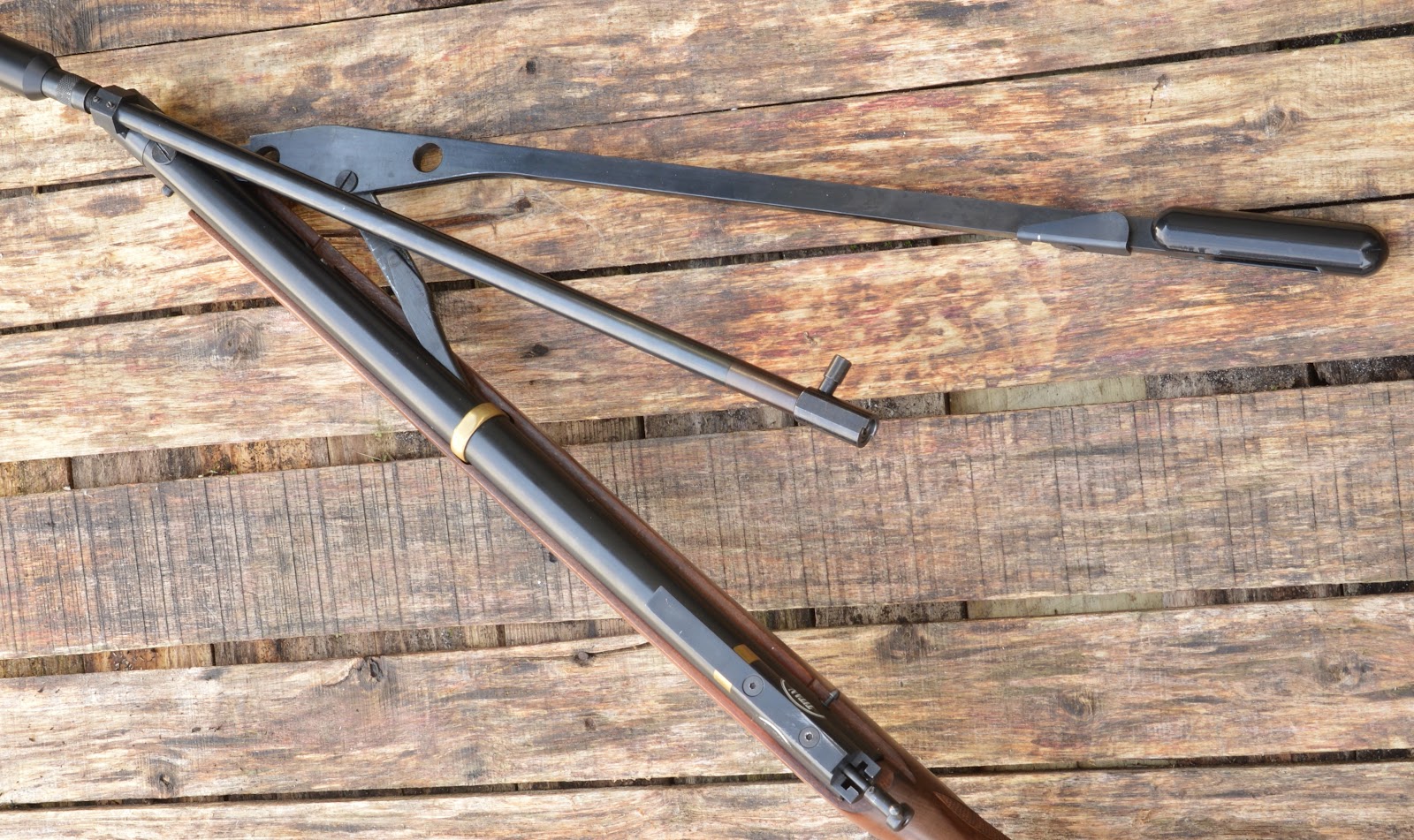 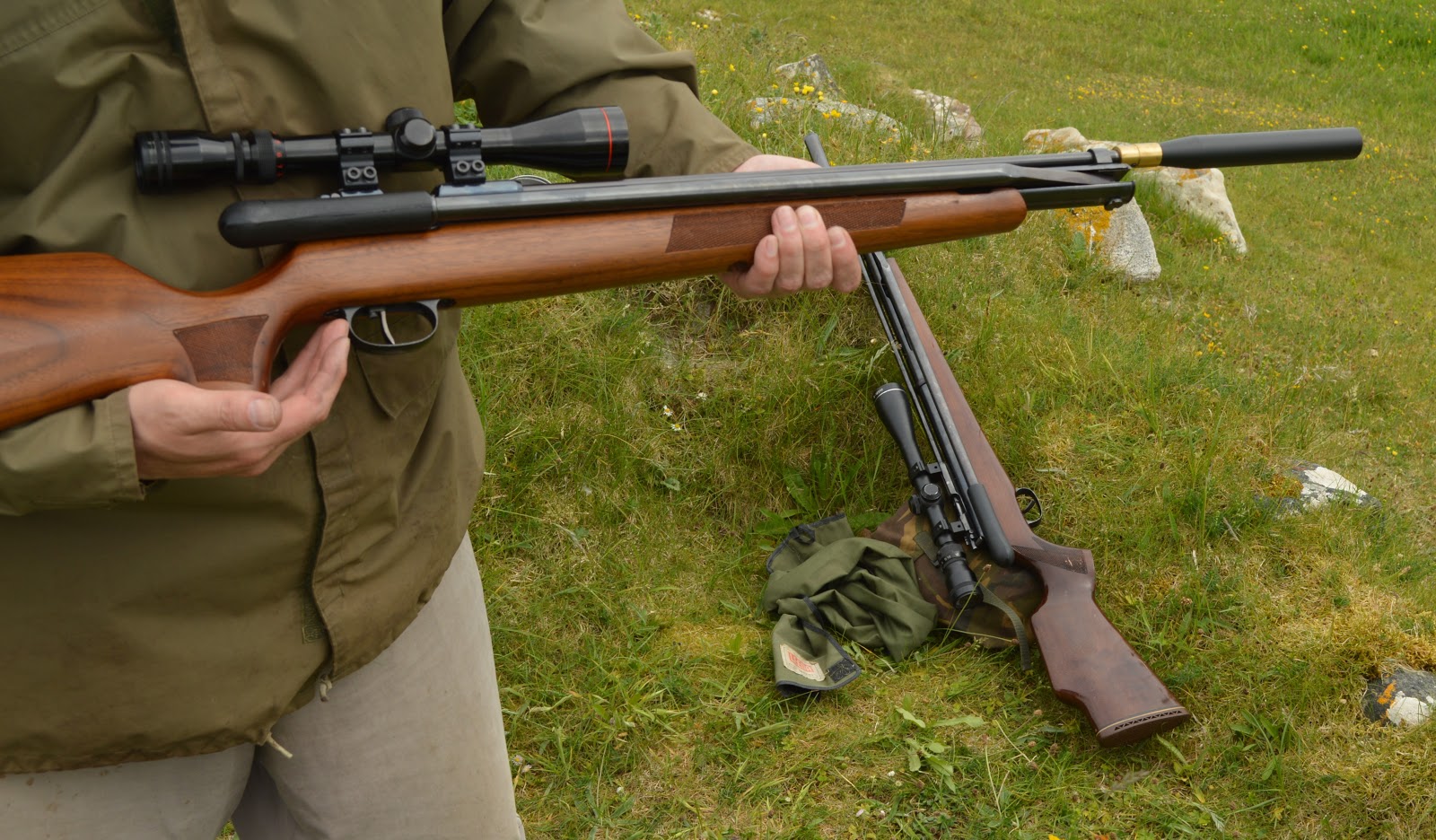 Another designer called Richard Spencer had been working commercially in airgun silencer manufacture and had made a name for his Air Logic brand. With an interest in pneumatics, he developed his own unique and very different single stroke air rifle. In 1987 his Air Logic Genesis was released and unlike all other SSP designs, the charging arm on the Genesis pivots to the rear of the action much like a side-lever spring gun. Another totally different approach was how the barrel that normally sits above the air chamber was in-line with it out front.

The arm is pulled back and an audible click is heard as the mechanism self cocks , then the arm must be closed forward compressing the air into the valve reservoir. To charge a Genesis is difficult at first but after practice becomes as easy as any other SSP design. Trying to push it shut as if it were a forward pivoting SSP can be awkward. However holding the gun and pulling the arm toward the action is much easier, especially if the gun is braced against the chest. After a couple of attempts this method was found to be ideal to the point of being easy. 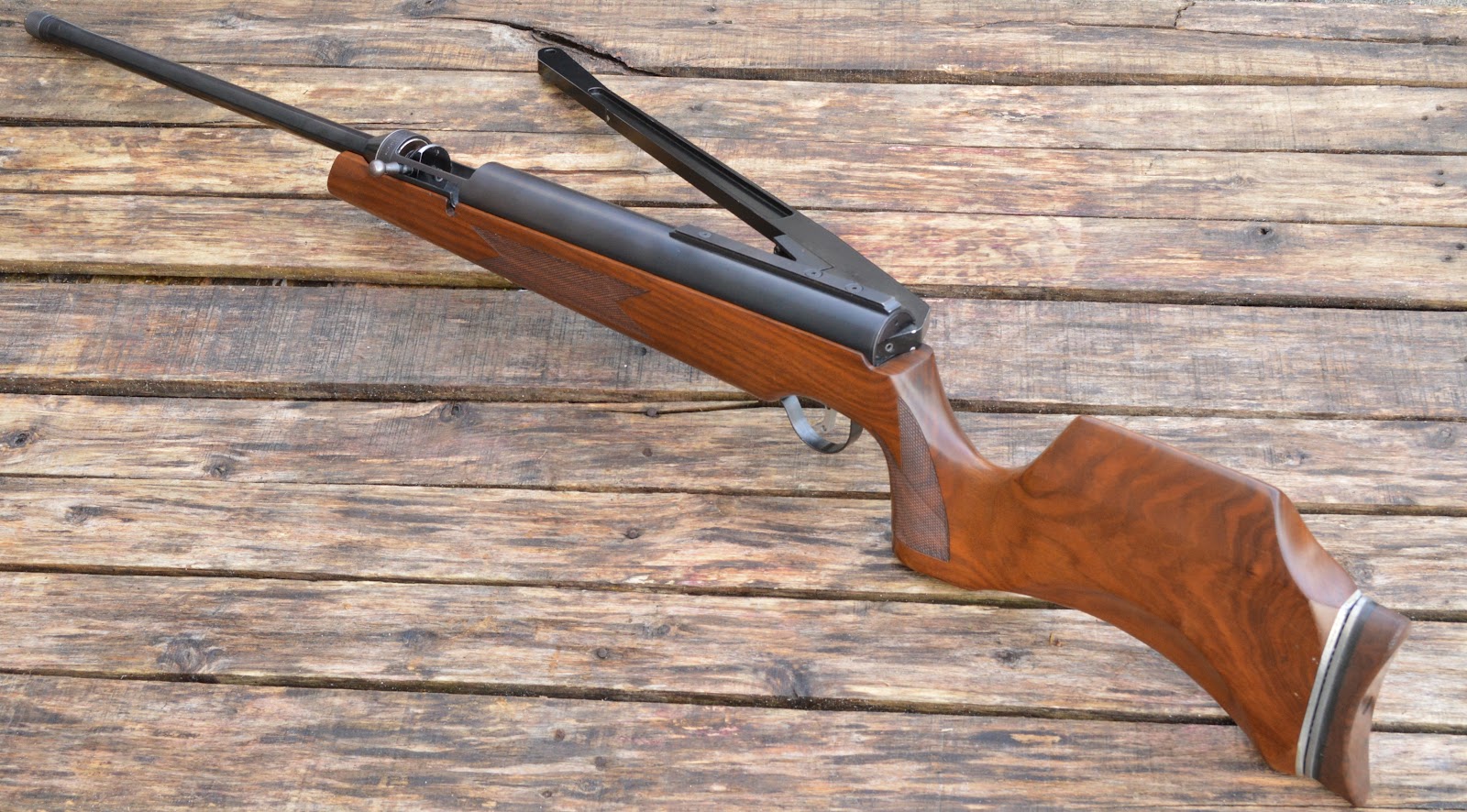 The barrel is an outer hollow tube inside of which the real barrel sits and this has a collar with the bolt handle attached. The handle is used to slide it back and forth inside the outer tube for loading. The barrel is held in tension within the outer tube by a series of specially designed cradles that self centre, so avoiding any misalignment or interference with zero.

The shorter inner barrel with an internal baffle meant that despite manufacturing silencers Air Logic didn’t feel the need to silence the Genesis. All Genesis sold were .22 calibre only and even with the total number of units released for sale at just less than 175 units, today they’re still seen on the club shooting circuit and have a strong following.

The Parker Hale Dragon was released in the early 90's. Slightly more traditional as it pivots to the front, the Dragon uses a neat trick of reducing the effort needed to cock the gun by the use of a complex series of linkages. Releasing the button that locks the arm, it’s swung out and fully extended. It’s been found to be a bit more manageable by people with short arms than some previous other SSP's. Then the Valve Button is set and this is found hidden within the trigger guard area and appears as a steel button that’s pushed upwards into the action. This is easily done with the left hand whilst holding the charging arm out. Then after cocking the valve the arm is compressed back. Loading and taking aim the valve button needs to be released and there’s a lever that hangs down in the trigger guard area for this. The lever can be pushed forward when on aim and it releases the valve for firing.

Charging effort is the easiest of all the standard factory SSP's. Weight is again an issue for some but for many the Dragon represented the best compromise. Referred to as the Sporter in .22 calibre, this was marketed as a serious hunting tool but it was also available as a specialist Field Target model in .177 and set into an extra deep walnut stock. The Dragon stands as the last British factory made SSP with many still in use today.

Other names do crop up. One such is the Laisar 12 made in a small batch by a designer called Brown, with the 12 in the title denoting 12ft/lb and only 6 units allegedly made. The Laisar was said to be a lighter weight and easy to use airgun and it shared some similar looking features to some early Bowkett work with the side arm levering around the front of the barrel muzzle to the other side of the action. The valve button was however set within the trigger guard. Webley looked again at the SSP and the Paradigm was reported in the airgun press. However the project didn’t reach full factory production and today only a few prototypes are known.

Since the 70's the British made Single Stroke Pneumatic has proved the design is suitable for far more than target shooting or low power plinking. Although now out of the limelight due to the increased production of cheaper pre-charged airguns, the desire to have a totally self contained pneumatic and recoilless airgun still persists.

Attempts by Bruni in Italy revealed a fun and interesting little project called the Action, and recently from China, Nova Vista's Spitfire SF1 has appeared but both unfortunately are tied into the lower power category. So called top-up hybrid pcp's such as the older FX Independence or Nova Vista's recent Pneupump whilst not true SSP are carrying the independent charging mantle. The idea simply won't go away.

It’s a mystery to this day why no higher specification factory SSP's were created in America. Having been soaked in pneumatic culture for decades it may have been that Co2 stole the show. However, hobbyist and independent engineers there have been furthering innovations in recent years, one design being the Freedom700 SSP with its twin scissor-like charging levers and we eagerly await the next chapter in the development of the Single Stroke Pneumatic.