So you last used an airgun in the Scouts back in 1978 and you want to reignite that old passion again? Or you’re a total beginner, looking for a new hobby. Where do you start?

Questions that need asking are, do you want to go formal target shooting? Or do you need a tool for controlling vermin? Or are you just happy with informal plinking in the back garden? A lot of people enjoy field target shooting in its different guises. Yes, you stand in a wood in your wellies or lie down in the muddy grass trying to shoot targets set out around a course. If it rains, well, you should have brought that mac! Some are drawn indoors to the fireside to collect, never taking their airguns out of their boxes. Yes, sad anoraks really do exist. In appreciating older classics, some people have started taking them out of their boxes for events designed for shooting classic spring airguns. Others use their older vintage airguns in Bell Target events. Shooting at bells in pubs for reasons now lost in history makes sense only when beer is involved. Airgunners can be drawn into either air rifle or only air pistol shooting, never the twain meeting. So summing up, that's already 6 or 7 very different disciplines or themes to draw anyone's interest. 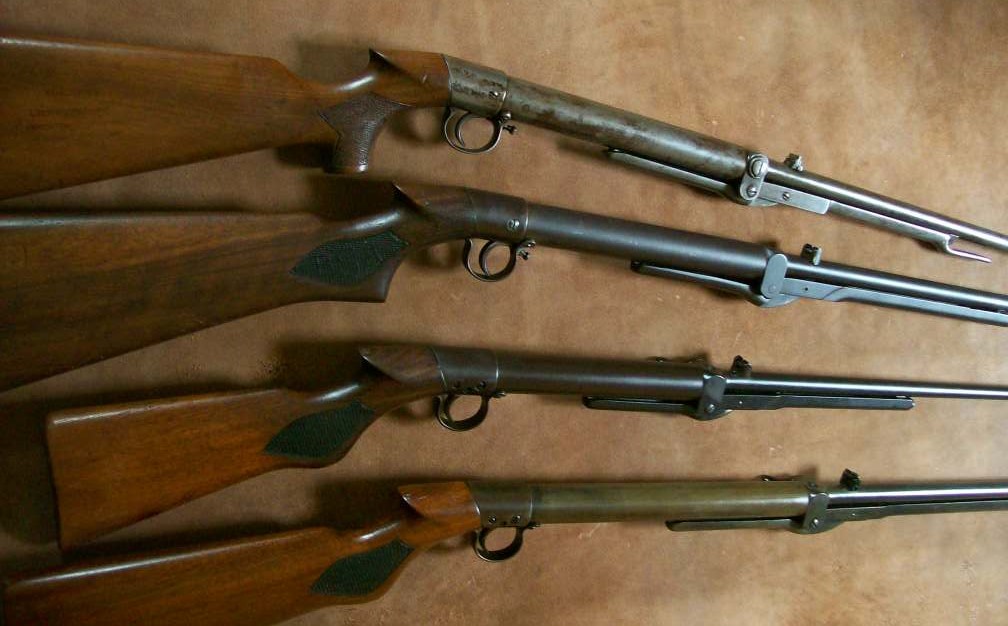 What could be better than Beer and old Airguns - Bell Target

Airgun choice is a totally personal matter and you can engage at any price level. Today's market is aimed squarely at Pre-Charged Pneumatics or PCP's. These are fed compressed air from an integral reservoir. This reservoir needs to be topped up regularly. Investing in a large cumbersome air tank and keeping it in a closet ready for easy refills is one route. When empty, drag it on a pram to your nearest gun shop that has a pump compressor. Not all gun shops have this mind, so some flying around may be needed. Tanks also need to have a legal test for safety, without which if ever it goes bang you could end up flying to the Moon. The other option is to buy a foot pump. If however you’ve been smoking since 1978, trying to pump up an air rifle cylinder can be hard work. But, with this simple setup, you’re totally self-sufficient. Most of today's new guns are regulated. That is, a device known as a regulator that meters the air after every shot. Before that, and bearing in mind that there are many superb second hand PCPs out there without this, owners simply had to top up the air after so many shots to maintain the pressure at an optimum level for any particular gun. Some airgun designs went for so-called buddy bottles; smaller cylinders that you could take in the car boot or even carry in a rucksack for refilling on the hoof.

Above a PCP Falcon; below is a B45-3 pump-up pneumatic with its swing out pumping arm.

Recently, some PCPs look like they fell off the back of a circus wagon. I’ve no idea why, when for decades a nice piece of walnut and deep blued metal work was all that was desirable. Trends aside, most all are insanely accurate out of the box, regulated to maximise every single shot and with no big spring to control are all recoil free.

So why are heavier spring powered air rifles that kick like a mule still so popular? With  many technical advances or perhaps because of them, the PCP could ultimately be the most boring tool ever invented.

In sharp contrast, springers are never boring. Much has been written on the pros and cons of the spring airgun and how to manage its recoil. Grasping a heavy springer firmly into your shoulder to control recoil will actually make it bounce more. The PCP offers repeatable shot to shot accuracy with minimal experience, but a springer owner develops shooting experience.

Unlike a PCP, there’s a lot going on inside a spring airgun with many moving parts rubbing against each other. A new springer will take time to run-in, that is for the components to bed against each other through contact and lubrication before it comes alive. A rough springer that looks like it belongs in the local gunshop's bargain bucket could be a total joy to use if it’s been looked after.

Less popular today but still seen is the self-contained multi-pump pneumatic. Operating on the same principle as the PCP, multi pump-up pneumatics need to be pumped repeatedly to fill the valve with enough air for one shot. Staggering – people actually liked this? Yes, as accurate as PCP but with no reservoir, they were super light. Before affordable PCP's arrived these offered an alternative to the heavier spring airgun and recoil. The stock fore-end hides a lever or pump arm that hinges at the muzzle. Grabbing the action with one hand and the arm with the other, the gun is held like a pair of giant scary scissors from a bad horror movie, “Psycho Seamstress II -The Final Cut”. Admired by animal lovers everywhere, wannabe hunters needed to pump these up  5,6 or 7 times, making a frantic slapping sound; each motion loud enough to scare even the deafest rabbits away. Today they turn up more on the used collectors market and the Air Rifle section here is a favourite hunting ground for names such as Sharp Innova and Ace, B45-3, Benjamin and Sheridan. More recently Webley renewed interest in this style when they released their super affordable Rebel air rifle.

Today the other very important airgun format is Co2 gas power. Owners are tied to buying the gas capsules to power them, but people love these recoil-free airguns. Recently most development in Co2 airguns has been with air pistols. Ask a few gunshop owners what they sell most and it’s a guess that Co2 pistols will top the bill. Recent years have seen a real buzz with many new releases, from single-shot pellet guns such as the SMK Artemis and Victory pistols to the BB repeaters – the Western-style cowboy revolvers and wartime German PO8's, P38 and Broomhandle's by Umarex and other makers. Buying the Co2 for them is a chore but if bought in bulk the price drops substantially. Carbon Dioxide Co2 gas is pressurised to a far lower level than the dangerous levels needed for compressed air, so the components are by design under less stress, wear and tear. Co2 air guns rarely go broke, but the seals that keep the gas where it’s meant to stay can leak. Most airguns will have a seal kit available for servicing or a set can be made up from suitable O rings. Co2 Air rifles such as the XS78 are still going strong after decades, still offering superb accuracy and value and new designs such as the SMK CR600W multishot keep people interested in Co2.

Getting into airguns you could end up with a springer, a PCP, a Co2 rifle and a brace of air pistols. One warning, once you buy one it'll take real effort not to want another, and another, and…

Jonathan Young
Writer
Published on 19-08-2020
Started out very young with cap pistols, progressing to archery and this developed into a real interest in studying older weapons. Air weapons followed and it's been the Airgun that's drawn me deeper into shooting more than anything. The sheer variety of different types available is unparalleled, from bb guns to replica pistols, from rusty old springers to high-end target rifles. It's impossible to get bored! Add a dash of patina and you gain entry to the wonderful world of Vintage Airguns. My very first air gun was a £35 diecast Daisy - I've never looked back.