Back in the good old days, we were allowed to play with handguns. For a clubs’ membership probation period, an air pistol was needed. The only affordable one was a long Daisy Powerline 717. It seemed huge, heavy and after a session felt like lead. After the mandatory 3 months were up it was quickly retired and on graduation to full membership and real guns, one favourite club pistol was picked as often as possible - a .22 LR Ruger MKII. Rugers are solid little guns - so all that weight training was actually helpful. You didn't mind back then if a Colt 1911 .45 felt like a sack of potatoes. And as for a Smith & Wesson in .357 Magnum, you really felt like you needed that heft of solid steel and a long barrel to soak up the recoil and stop your wrist from snapping at each shot. After the pistol ban, it’s more or less no pistols now unless you like smokin' black powder. By necessity, air pistol shooting got really big really quick and Co2 airguns played a big part in the new UK shooting scene. Size usually corresponds with weight and some people still like big, whilst small has its own fan base with it being lighter and some would argue easier to control. Small air pistols are also just really neat. 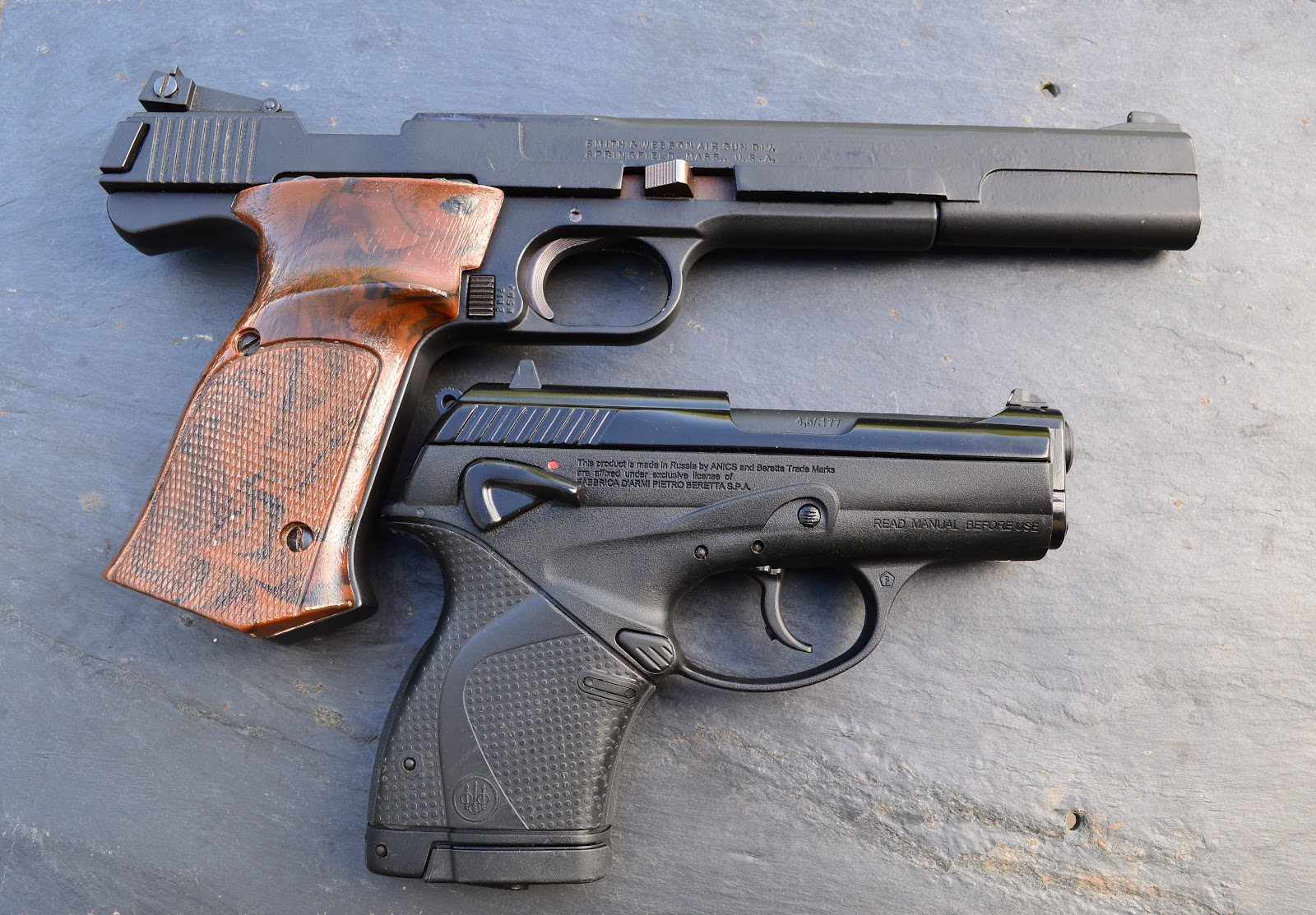 Nothing can beat the classic Co2 American made Jaguar Arms Cub for the smallest of small air pistol title, although a Harper Micro Pistol that used a single shot self contained air-cartridge could be argued as a contender if still allowed - all tandem air-cartridge weapons soon had their own ban. Let’s look instead at another favourite; the Anics Beretta A-9000S. This was made by that other Russian manufacturer based in Moscow and not related to Baikal way out east in the boonies. Anics appeared on the UK scene with their small A101 series Co2 BB repeaters, unremarkable in many respects except for a superb trigger design and a unique Co2 revolver called the A201. Then the chunky Anics Skiff pellet repeater and using the same tech this item soon followed, the downsized and much sweeter little A-9000S with Beretta trademarks. 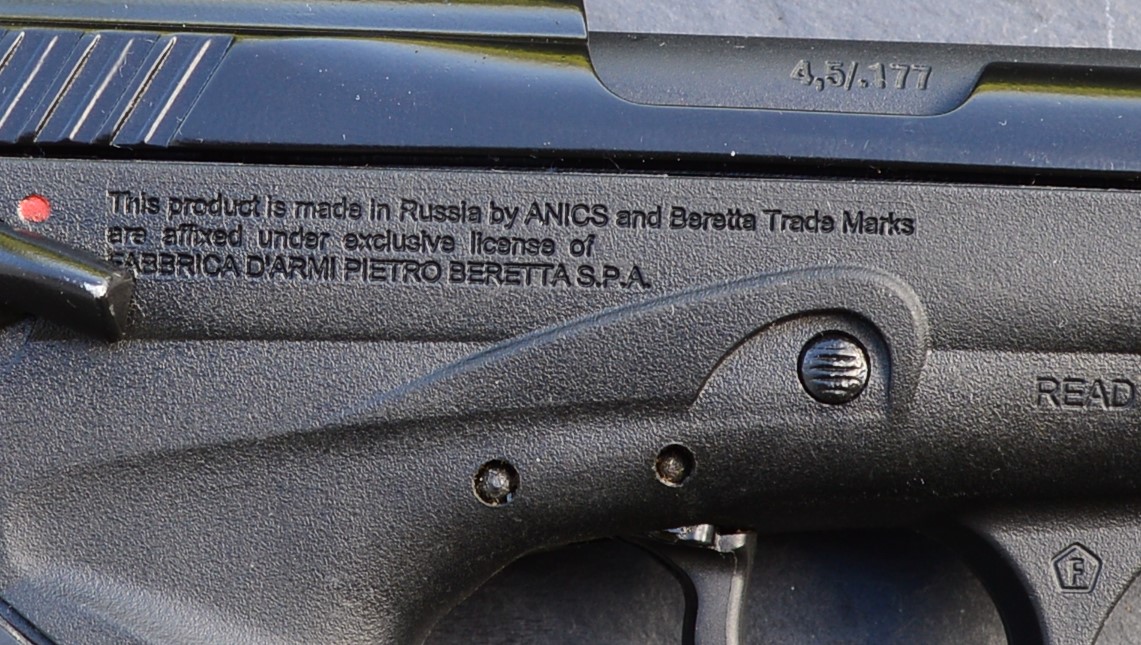 'Trademarks and F Frei mark for import to Germany'

This is a .177 pellet firing SA/DA 12Gr Co2 pistol with 22 shots on tap. Yes, you read right that's 22 pellets. It’s based on the real and diminutive polymer framed Beretta 9000 series semi auto, which itself is now a pretty rare firearm. The Anics is near enough a 1:1 scale copy in plastics with metal parts and top slide. Basic adjustable sights and an added rubbery feel coating to the central grip area completes an unusual little air pistol.

The Co2 chamber loading is really nicely done, if a little overcomplicated. A trapdoor catch is pushed back to release open the door which swings out by grabbing a finger plate. Underneath is the tensioning screw that’s adjusted for best fit with your particular 12gr bulb which drops in head first. The door is closed then the finger catch lever is pressed home flat. This final snap pressures the assembly to pierce the bulb. It takes more time to explain than to actually use, but there are a lot of things going on with some superb over-engineering normally seen only on German airguns.

The magazine is highly unusual and is released by a side release catch. The casing is more or less transparent; revealing small tubs or pellet holders in a row within a perimeter channel. Each holder is a separate slice of tubing sitting loosely in this channel. Anics provided a special double ended tool to line up the holders and also to seat the pellets. These are fed into place through the rear and then pressed home by the tool a few at a time, then the line is rotated further around revealing more holders to fill. If lost a probe can be made from rod offcuts, with a separate rod for seating and a longer rod for rotating the feed. 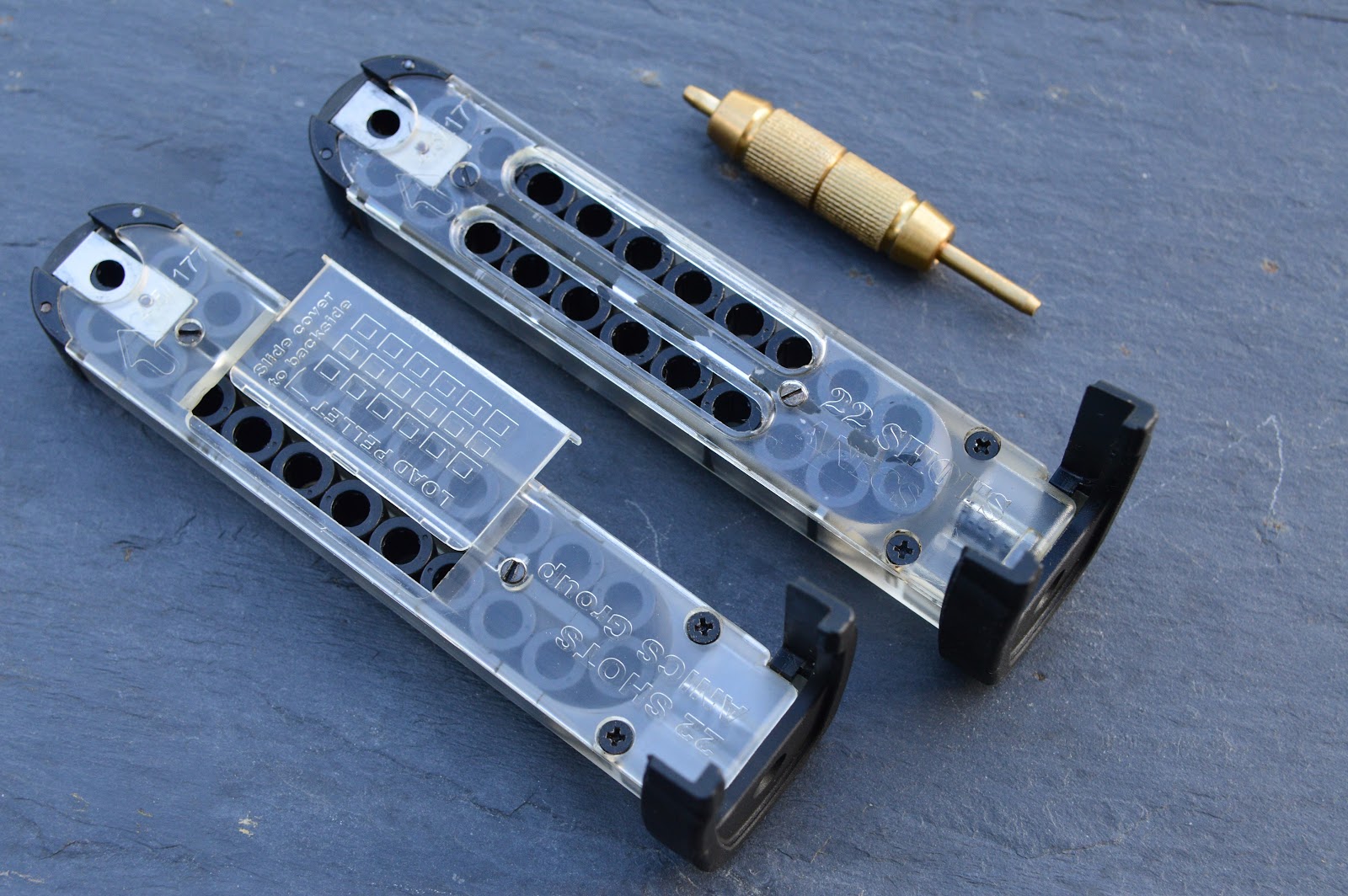 'two versions of Magazine, each with 22 pellet holders'

As the trigger is pulled and does its thing with the trigger bar to release the hammer, another two linkage levers push out from the frame into the mag well and into the magazine. These catch, push up and hold the pellet line for each hammer strike then rotate it around on the next pull, like railroad cars getting shunted along a track. The method of operation causes some to complain that the trigger action is a tad tough, just as it was on the original bigger model. It is, and pulling the hammer back to cock doesn't help. The hammer in reverse operates those two levers against the magazine feed as well as the all trigger components. With the mag released, pulling the trigger reveals the two protruding levers which do all the work on the pellet feed. It works well enough but can be clunky. Best shut your eyes and just pull that trigger.

Worse, much much worse is trying to rack the slide back to cock the hammer. On all handled so far this jams the hammer up inside the rear of the slide, so is best avoided. If the slide locks and jams grasp the slide back fully whilst pulling the trigger slightly to ease the hammer away whilst remembering to keep your finger on the slide release. The slide will be removed, but rarely is this needed. If removed the manner of pinning all the components through the pistol frame can be observed. 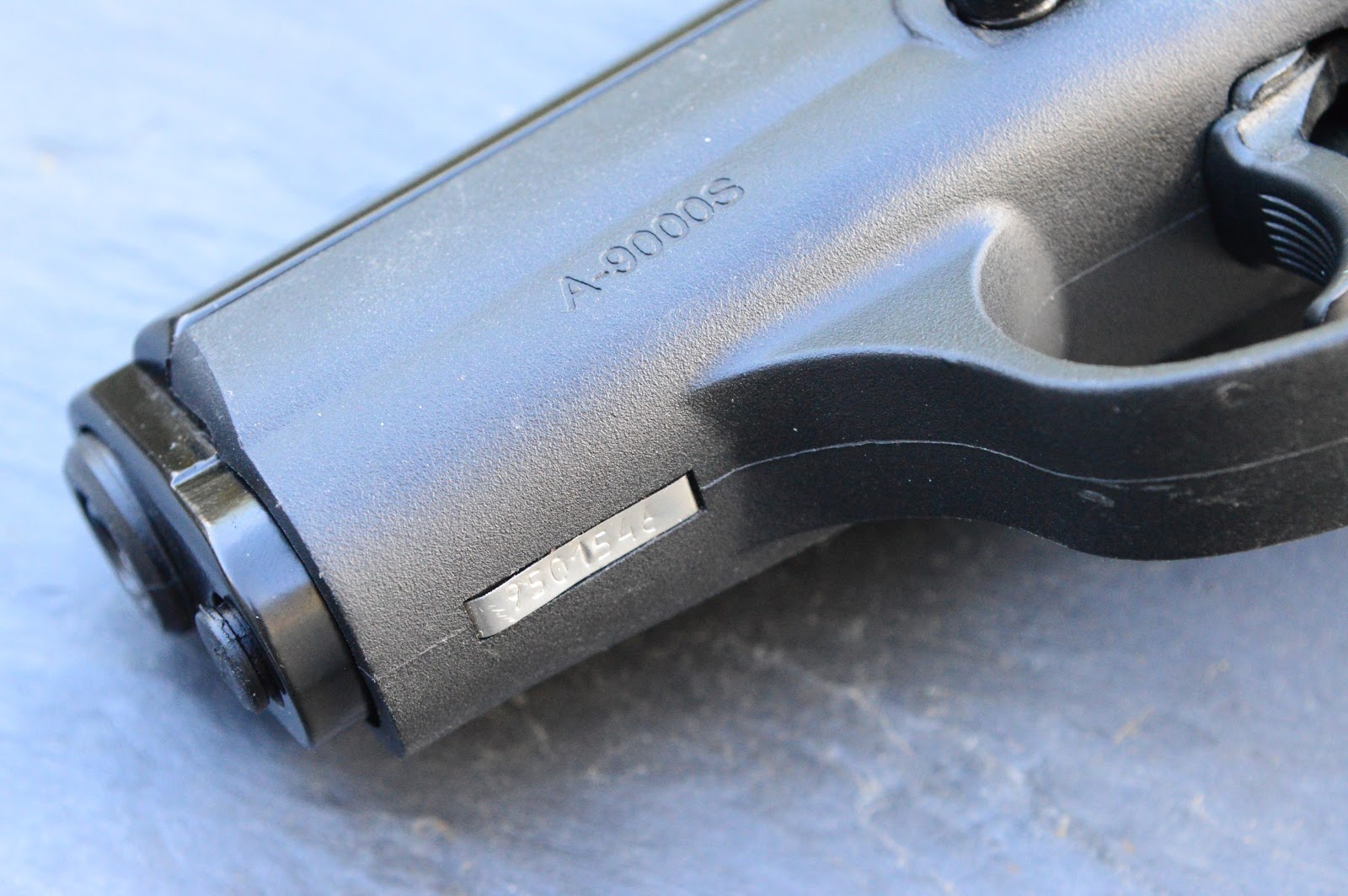 Some differences in the magazine design were noted in preparing this article. To load up each pellet into its holder access is provided to the rear of each magazine. It’s assumed that one earlier version shown here with its transparent sliding trap door was later replaced for the easier to make simpler version with two slots. A small bonus with these mags is that a number of different pellet lengths are usable up to a generous 7.6 mm according to the manufacturers booklet with a warning highlighting the need for careful choice. If too loose, too tight or one assumes also too long the pellet feed mechanism that engages the feed can grind to a halt. 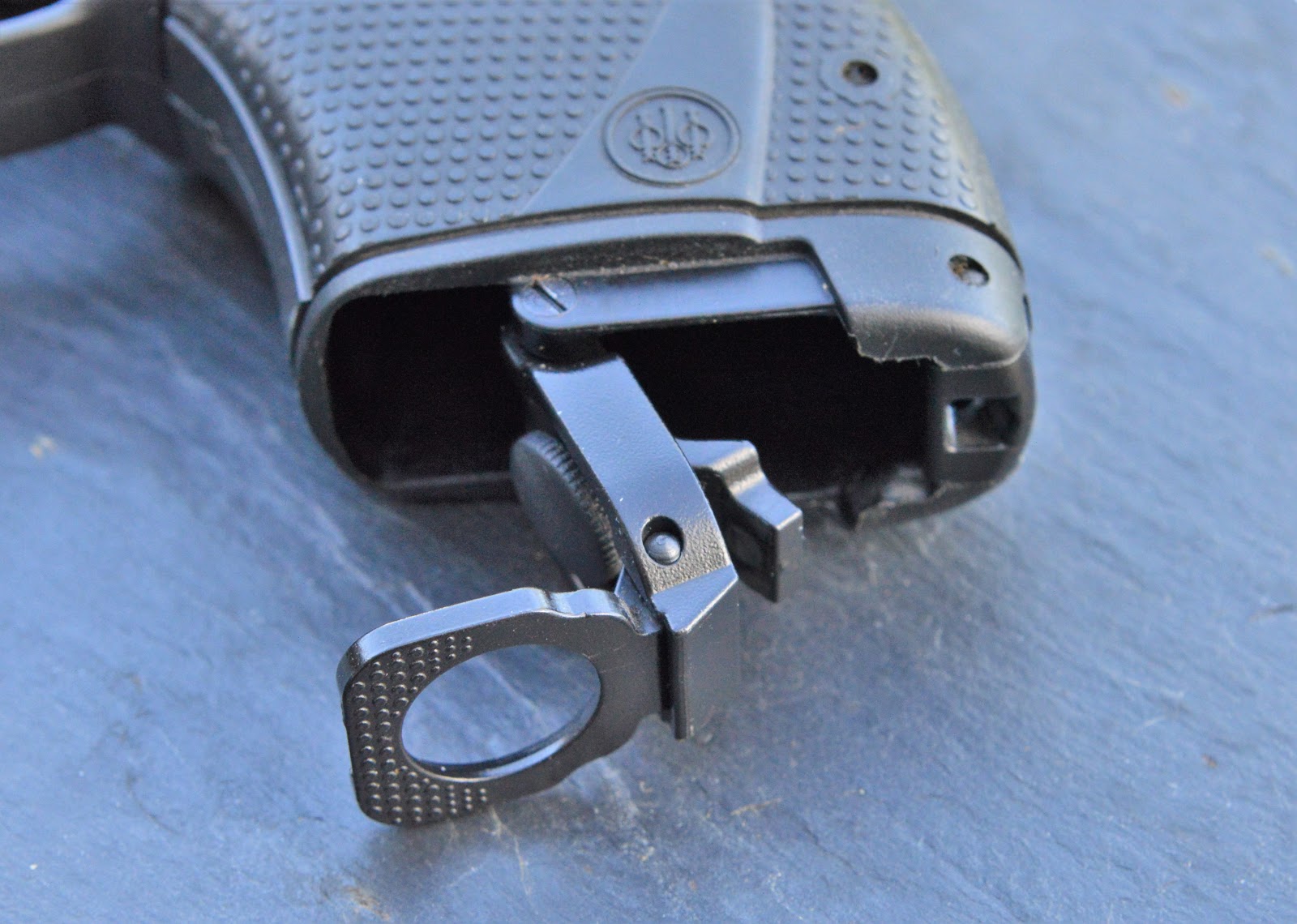 In examining a number of these units, it was noted that many owners had dribbled silicone oil everywhere to help smooth the action. Perhaps a better solution could be to use a grease and only to specific areas of friction. If snagging occurs check the obvious first - examine the two trigger claws that operate the feed. The ease or lack of it with which the magazine feeds pellets around the housing is usually where any problem lies, rather than the actual frame claw mechanism itself. Despite the clunky nature of operation on many units examined, these claw parts appeared to be indestructible.

The Valve is small - tiny small - and roughly 17mm across by 17mm wide but with a very heavy hammer spring and good inertia this is compensated for. The advertised power output was near 140 m/s. The A-9000s came with its own fully illustrated 24-page Owners Manual, all in English and not just two pages per different language. There’s even a full parts list and diagram. Also included was that neat turned brass tool to help load up those wacky magazines. 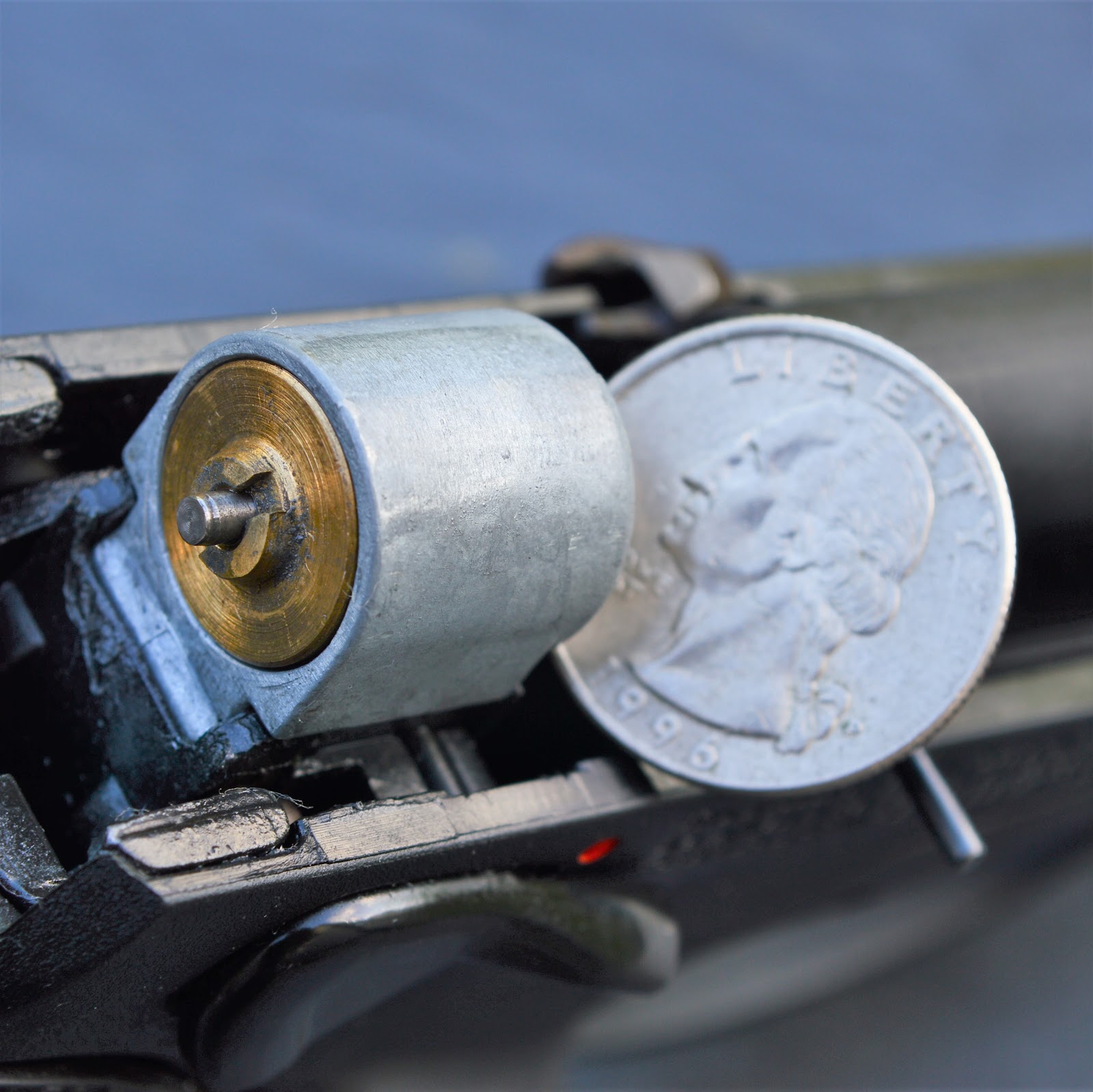 These air pistols aren’t seen often now and even the original firearm is also little known. Rarely ever seen in the movies, Tom Cruise used one in the science fiction film Minority Report. The downsizing of the original bigger 28-shot Skiff pellet mechanism into the tiny Beretta at only 169mm long really works, without losing out much on shot count either. In a world of steel BB firing, gas wasting blowbacks, this is a  22-shot rifled pellet firing repeater, with more power on tap, as it’s non-blowback. And it's so small. Anics is a manufacturer that we don't hear enough about. Right now a web search appears to bring back little. Let's hope Anics reappears on the international scene - they’ve made some pretty amazing airguns. 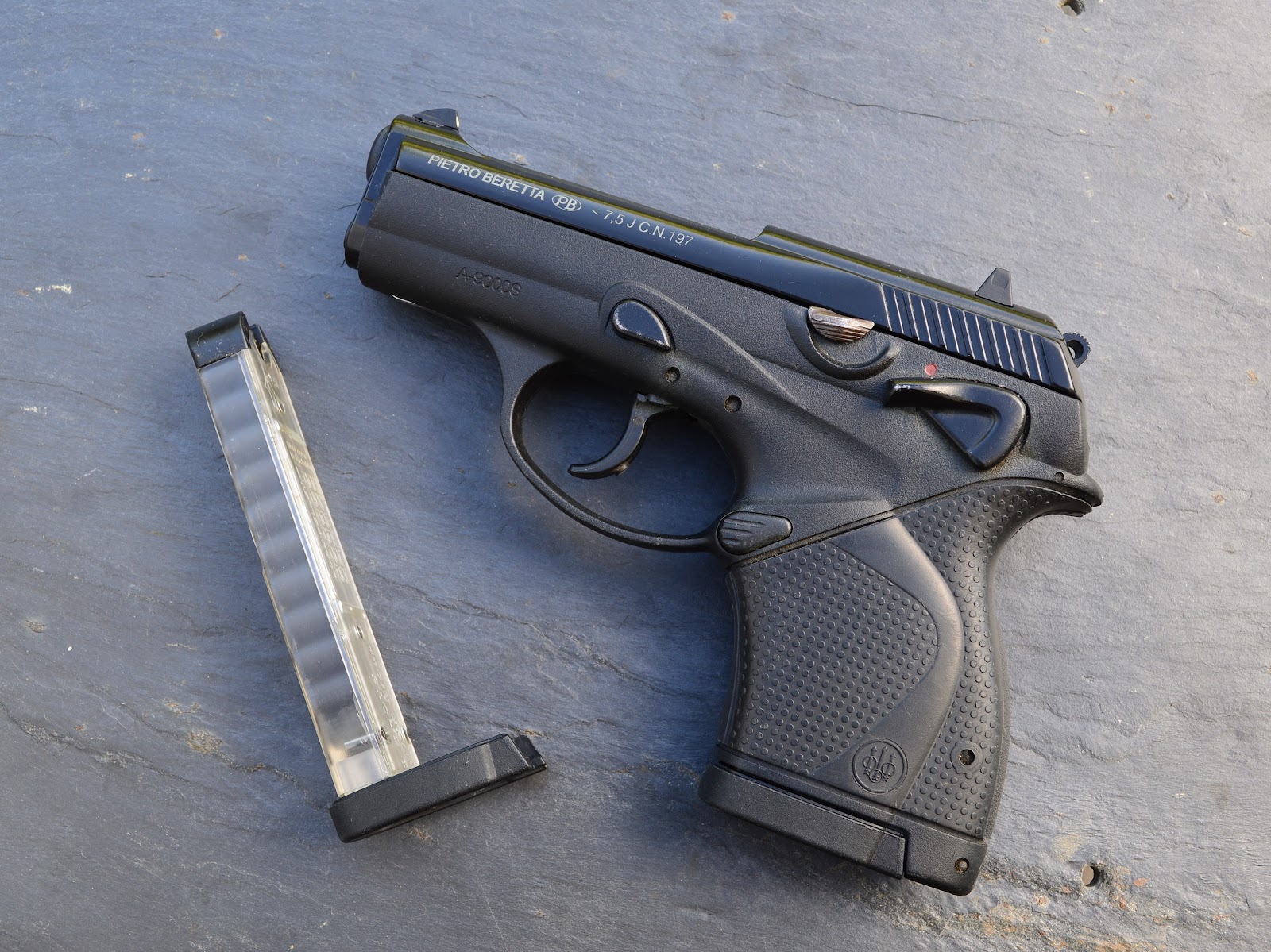