Airgun Review: The Artemis P15
Big Trouble From Little China - Artemis P15     My son has been driving me up the wall over the past couple of months as he insists on going vermin hunting with the Bullpup r...
Read more
Home / Community home / Reviews / The BSA Shadow Carbine
Be a contributor
Reviews · Airguns reviews

If we searched for old cameras there would be some chance of finding unknown models, as somewhere there would be records kept of everything ever made in the photographic universe. With airguns however, information can be scarce.

It’s very easy to miss an airgun if it didn’t get wide coverage or wasn’t available in your area. These then resurface years later and people are understandably mystified. Information sharing pre-Internet was like smoke signals at dawn. Since the internet started, you may well just get smoke in your eyes with all the hearsay and errors.

One such airgun hardly ever seen even in its own country is a BSA item from the 1980's called the Shadow. It's a short break barrel springer in a synthetic plastic thumbhole stock. This is similar to their previous air rifle called the Buccaneer. Both have roots in the famous Scorpion air pistol. Many people may have heard about the futuristic raygun-like Scorpion. Less people know about the Buccaneer and its ‘go-faster’ stock. Few - including this author - heard of an in-between model called the Shadow. 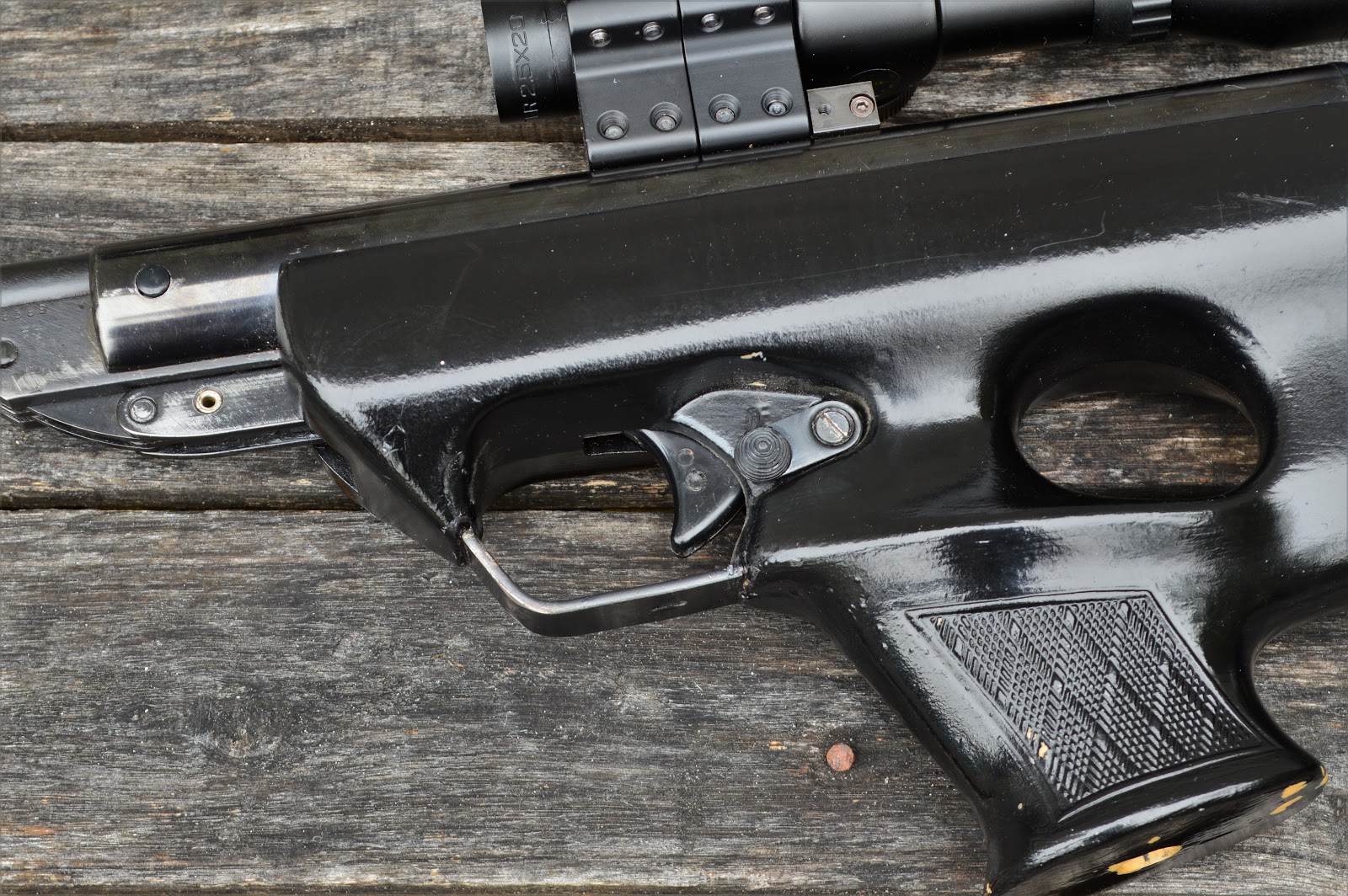 The Shadow at first looks like a chopped down Buccaneer and it’s probable that more than a few have been passed over as just that. The Buccaneer came in an ultra modern thumbhole sporter stock in wood effect plastic. Very few airguns back then had a factory thumbhole stock even if it was only plastic. It made the gun look like it could give sports car performance, but didn't. The action platform was from the super Scorpion air pistol but as the spring cylinder is only so long power was low. The Buccaneer did turn turn heads and being my brother's first air rifle it provided many hours of fun.

The Shadow is similar but different and shorter. It’s a unique carbine version of diminutive proportions from the same BSA family tree. This was released in the 80s to give a little extra life to what was an old design and came in a black stock, but there was also a second cosmetic model called the Trooper in a camouflage pattern stock. Well Rambo was on in the movies… A side note is that as all the variants are similar and share component parts, it appears that the carbine stock was available for sale as an accessory for retro-fitting to the Scorpion pistol; neat idea. However some carbines may be only more commonly seen Scorpions and not very rare Shadows. Look close and the word ‘BSA SHADOW’ should be clearly visible to the cylinder between the scope rails. 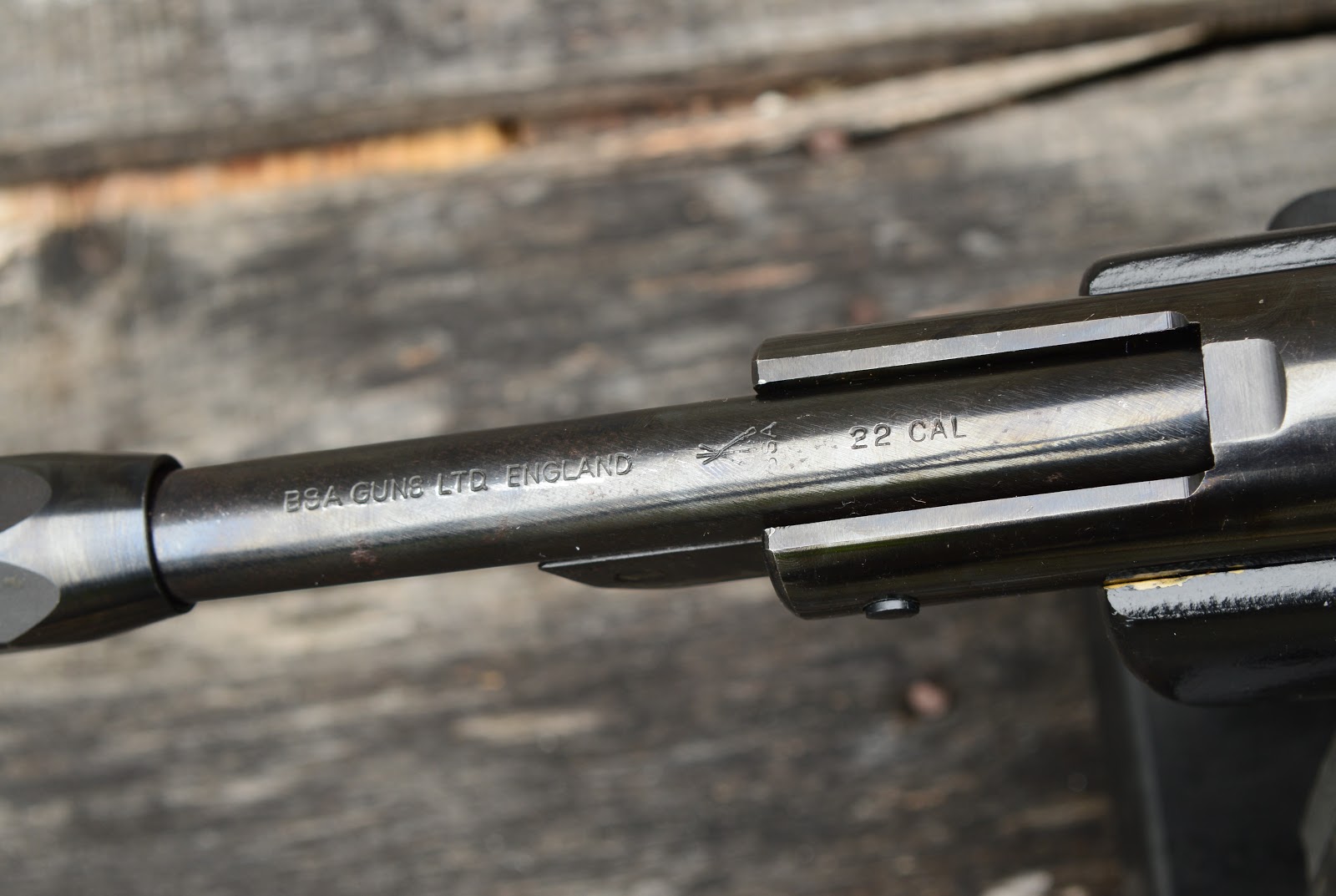 As with all the other guns in the line, there’s the same auto safety catch. This infuriating but clever device makes you work safely. Cocking the gun, the safety button to the side of the grip clicks on disabling it. Sounds simple but it's actually a lot more complicated than that; as anyone who’s ever had a Scorpion apart will tell you. Thankfully it rarely goes wrong and the switch is right by the thumb area inside the trigger area recess and is so easy to release when on aim.

The short barrel does make the cocking cycle stiff. BSA had provided a slip-on friction fit cocking aid to all previous Scorpion and Buccaneer models. This was originally a plastic hollow tube with a slot, designed to slip over the muzzle and around the open sights. It was really only for extra leverage, and hey, looking like a silencer it was cool. BSA then appear to have added some dual purpose cocking aids that appeared very briefly around the time of the new Shadow, referred to as true sound moderators combining both functions. An original basic tube used on this gun slipped off the muzzle on more than one occasion when the gun was being cocked. The resulting snap of the barrel ejected the foresight blade clean out of the assembly. Hours spent scouring grass for a missing part or a micro second spent tightening up a screw – you work it out.

After repairing this, a remedy was quickly sought to replace the worn tube but this posed a problem as the sighting would be affected. On such a short action the reduced distance between the rear sight and foresight is not ideal for a decent sight picture . In fact it's truly awful. The same sights were used on other BSA's and are great. Vague memories of using the Buccaneer recalled it had a peep sight. True, BSA had in fact supplied a similar peep blade for this unit and seen on some of their later Meteors but with none to hand reluctantly a scope was opted for. By coincidence a very short BSA scope was found that fitted the action without interfering with the barrel during the cocking cycle. 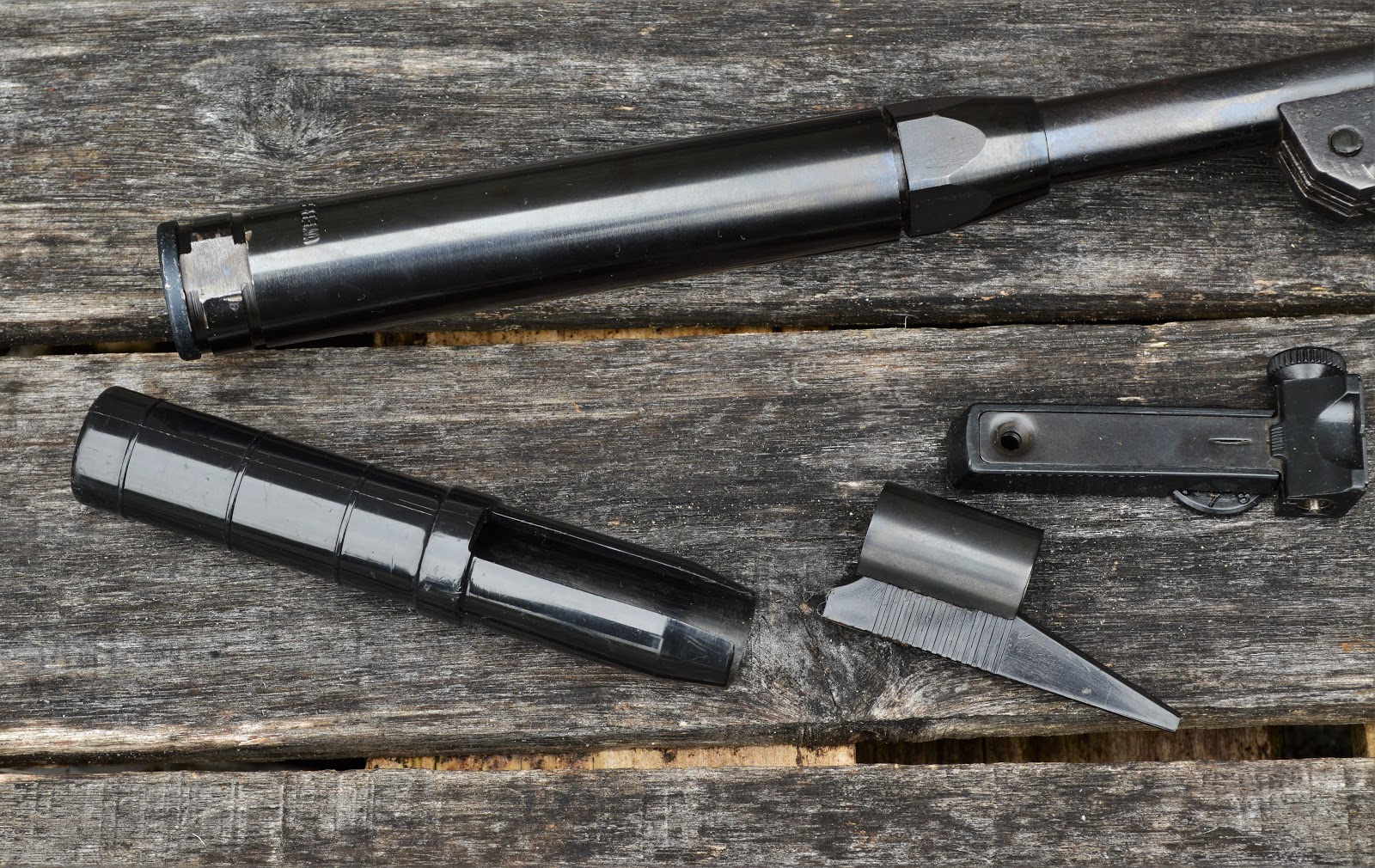 To sort that other issue, a two part Webley Pro-System silencer was installed. This is in traditional blued steel and suits the Shadow perfectly. Now the gun is quieter and with a secure barrel cocking grip and with a better sight picture. For those living in countries with restrictions on silencers, a fake shroud with no internal baffles fitted to a matching barrel adapter will be a reasonable replacement.

Accuracy was a surprise and the Shadow proved very unfussy during a test. The gun and scope combo was zero'd at 15 metres. On 3x3 metal targets – supermarket cigar tins placed in a staggered row from 5m to 40m all were hit in a short speed test by fast range estimation alone. The scope was a plain 30/30 not a mil dot unit and this loose accuracy was a fortunate combination of the right pellet for that barrel with a little time, well okay a lot, at zero'ing beforehand. A more in depth test session will be conducted later to find any alternative pellets of different weight for any possible fine tuning.

Today a reseal may be necessary on some of these older BSA's. It's noted by repairers that the then new synthetic seals can deteriorate with age. If something like crumbly cheese exits the transfer port then it’s needing a fix. Coming from a popular line with shared parts, seals are still available or can be adapted from other modern materials.   However dismantling one of these can result in lost sleep as the trigger mechanism packs a lot of small parts into a tiny space. Beware of LPS - Leftover Parts Syndrome. 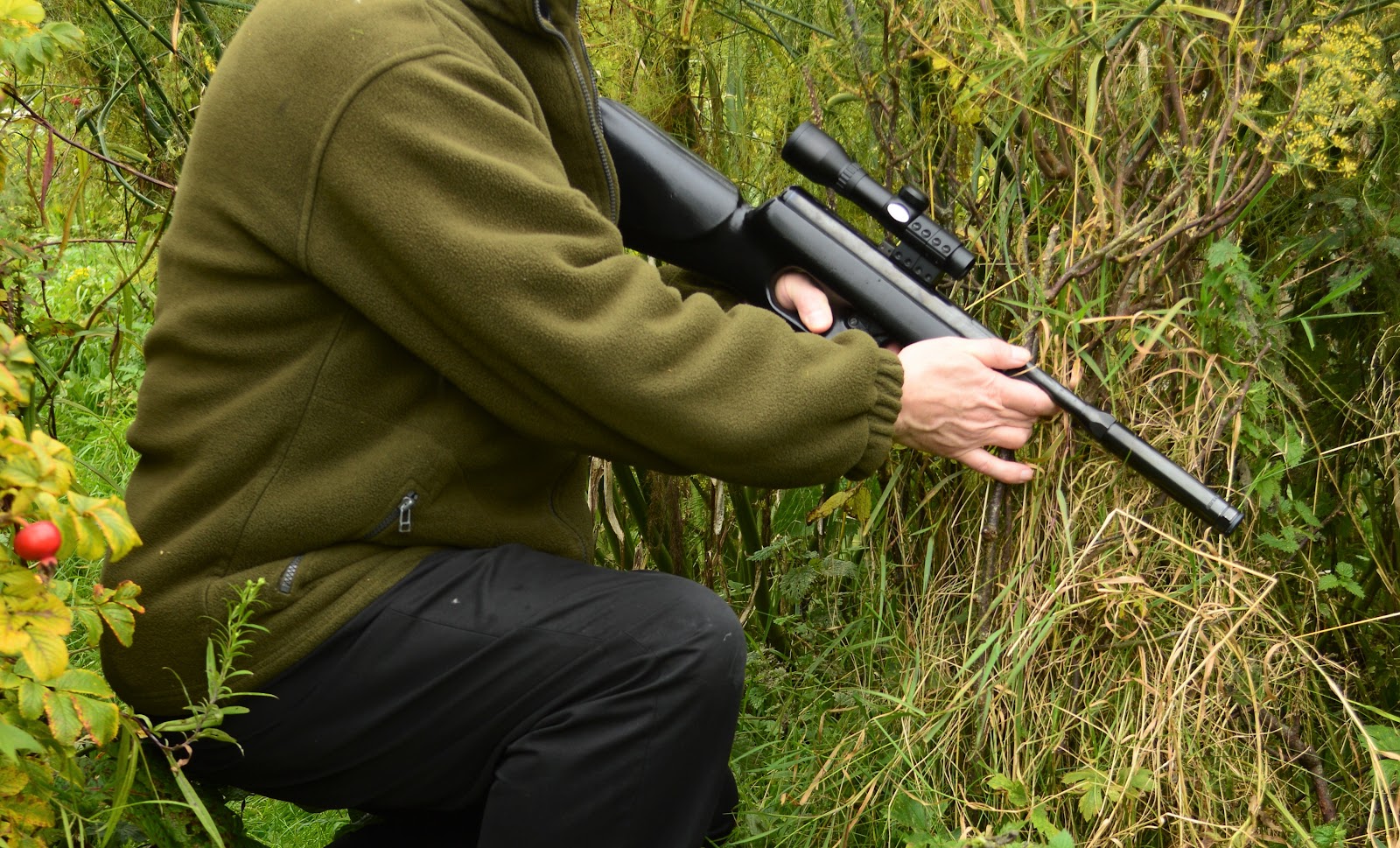 This has proved to be a cracking little carbine and is more usable than the longer Buccaneer air rifle or indeed the large unwieldy Scorpion air pistol. As a quality made blued steel springer with a milled scope rail to the action, it couldn’t compete with higher power air rifles in a country where everyone wanted to be out with so called full power guns. This may account in part for its very short production life of only a couple of years making it very rare. The Shadow and the rest of the older line vanished quickly as BSA had been drawing up new designs like the Superstar, the refreshed Airsporter and Stutzen Airsporter all with the super new Rb2 rolling breech. Certainly ahead of its time, if retailed today the Shadow would be far more successful commercially. Short carbines seem to be very popular all of a sudden…

By Ray Hussain    2020-09-23
The Regal gets top marks from me for accuracy and looks, and it did, in the short time I used the rifle prove itself as a target rifle, and would most definitely be a good traditional lightweight hunt...
Featured

By Ray Hussain    2020-09-21
As the bitter winter cold draws in, many of us will be looking for a warmer climate to migrate to, in order to continue doing what we love. The rainy weekend weather has prevented me from venturing ou...
Newsletter
Follow us on
Share
Search thousands of ads on the UK's top firearms classifieds site. You won't be disappointed.
on gunstar:
Home | Contact Us | Terms & Conditions | Testimonials | About Us | Sitemap | Help | Twitter | Facebook | privacy policy | the price generator | Scams | mobile site
©2020 gunstar.co.uk - all rights reserved - a member of the Friday-Ad network  |  dev (((:))) Memória Visual