In the late 80s PCP was expensive, elitist and because of cost, frightened most people away. But in only a few years prices dropped, with newer, lighter, and more affordable airguns appearing every year. In amongst the big manufacturers and tucked into quiet corners of the British countryside were other airgun innovators doing their own thing. One of these was Steve Harper of Harper Classic Guns. He’d been around as a custom gunsmith and airgun engineer and had developed a reputation for excellent one-offs and speciality airguns. He’d been most famous for his air-cartridge powered designs. He was also known for his handmade brass barrel liners called 'Harper Classic micro grooved barrels' made with very fine, almost ghost rifling. These were used to reline existing airguns to all calibres with .25 and .30 being his speciality. Custom calibre swaps were the in thing especially in .25 which had only recently resurfaced in the 80s after decades of dormancy in Britain. Crosman pump up pneumatics were re-calibred, also Sharp Innova's with their removable inner barrel were a favourite swap-out conversion. Even steel barrels on HW springers were drilled out to take these rifled liners.

By the 90s, PCP air rifles were firmly on the scene but PCP pistols were very expensive and rarely seen. Halfway through the 90s the British airgun press saw adverts declaring a new pre-charged air pistol with a space-age look when the competition, what little there was could look like ironmongery. Oh... and it was a multishot. When all else was single shot, yes 11 shots which for then was amazing. If that wasn't neat enough, it had an electronic trigger release powered by an easy to find 9v battery. Now for the 90s that was astonishing. With a super sleek black moulded frame grip the Harper Classic Wolf Electronic Repeating Air Pistol had arrived. 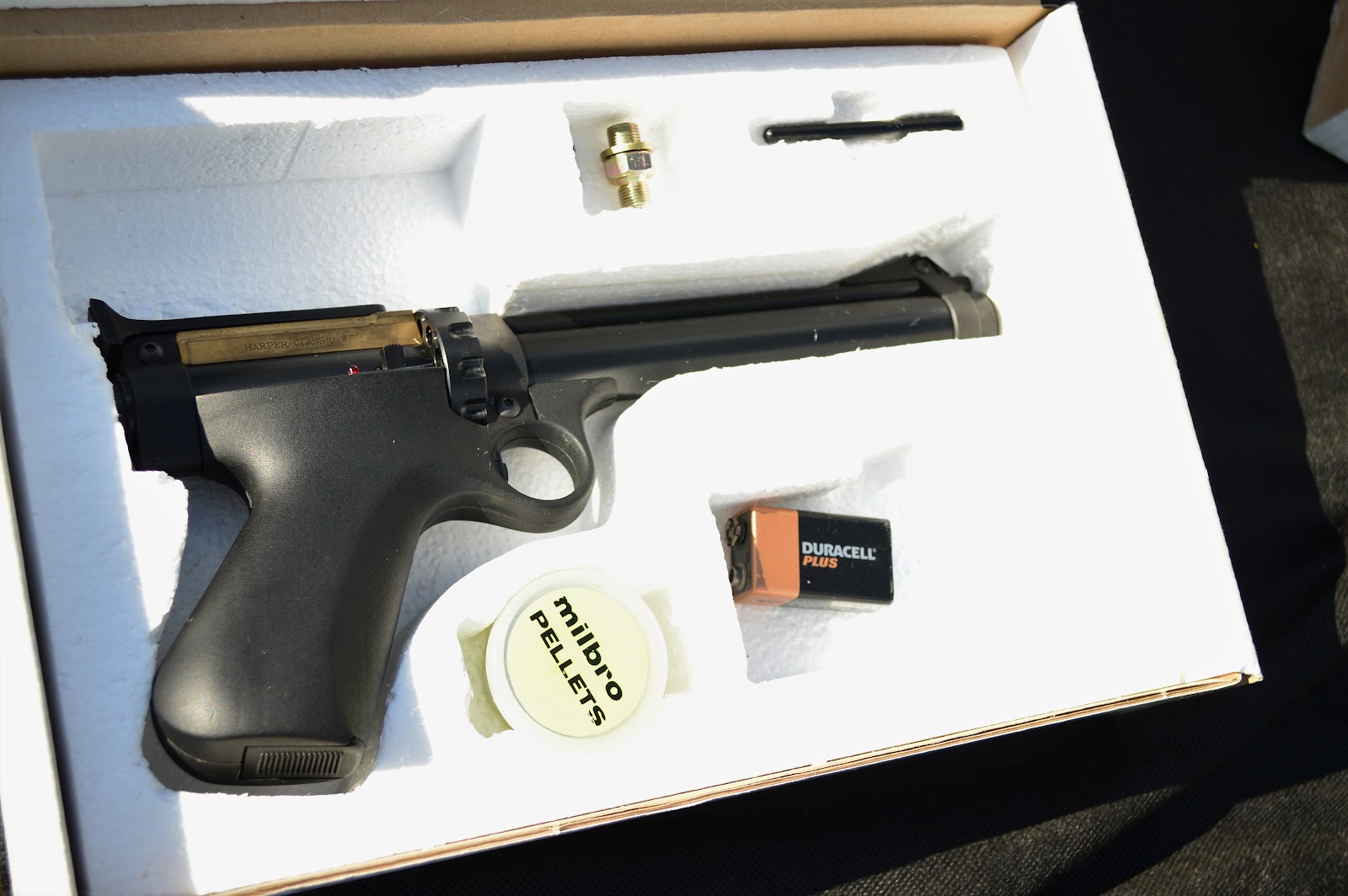 Each Wolf came in a professionally moulded multi compartment styrene tray inside its own purpose-made white cardboard box, and with an outer card sleeve. Presentation couldn’t be faulted. Inside was a special loading tool for seating pellets into the magazine wheel, a special replacement bolt for use with the scope rail when fitting a red dot, a fill adapter, and the instruction sheet. Also provided was a tub of Milbro brand pellets. A working relationship between Millard Brothers (Milbro) Ltd. in Scotland and Harper Classic had developed over the years. He’d used their unique Rhino .25 pellet extensively when there were very few pellets in this size available in Britain. The new Wolf had a specially moulded textured grip and this even had a small brass medallion stamped with the maker's logo.

The electronic trigger did what it was designed to do and wasn’t used to operate any sort of magazine rotation, which today mystifies some people more used to Co2 repeaters. When loading, the pellet tool is used to seat a pellet, then the magazine wheel is rotated to the next chamber. In reverse when firing it was claimed that rotating the mag and firing in quick succession, all 11 shots could be let off from the Wolf in only 4 seconds. Incidentally the magazine wheel isn’t removable and rotates on a central point - possibly to prevent issues with bore alignment in what was for the British market a very high power precision product. It appears that the original Wolf was released first in .22 then .177 was added.

Charging up the cylinder with the adapter then replacing the specially moulded threaded end cap to prevent dirt, you’re ready to get shooting. No – forgot the battery!  The base of the grip has a slider panel which when pulled back reveals the battery compartment in the hollow grip. The battery clip on the end of the cables is gently snapped onto a 9v battery inserted into the grip where it sits snugly without any noticeable movement. When readied the gun is switched on by a micro switch. This sits on the grip frame exterior up by the main block on the right hand side. A small red LED bulb which lies in front indicates battery life. This switch controls only the trigger and release mechanism so is itself a convenient safety button – one to be used often.

First-time users should practice using this on-off button as a safety feature to avoid embarrassment with accidental shot release before you get accustomed to the sensitive trigger. Getting used to the superb release takes only a little time but it really is touch sensitive to the nth degree with its small roundel pad. The precision mechanism maximises air per shot in ways this author can't even understand let alone try to explain, and around 50 shots per charge of air is possible, which is another superb feature when remembering this was back in the 90s.

If accuracy is the name of the game then the lack of the usual things on an air pistol aren’t even noticed – a clunky cocking bolt, the thwack of the hammer hitting home, hammer bounce and reverb, the firing release delay. The thing you get first off is how quick and silent the whole firing sequence is. It's all over in microseconds. Those used to springers can find PCP's of all description have a dead firing sensation. True; there’s no getting away from it, but at least with air pistols you can concentrate on aim, on let off and on follow through. In precision pistol shooting, what else is there?

Despite this being a small production affair, there was room for variants. The Wolf has a 7” barrel but occasionally a smaller version with a 4” barrel, called the Wolf Cub is found and as this is seen in far fewer numbers, these may have been made to order. The Wolf design also makes for a carbine mod and there was an optional wire stock made available. Then a true carbine version was released. This was built to much higher power spec. on the same platform, with a longer air cylinder, barrel and matching separate moulded forend. Very few carbines exist and of the total production, possibly only 25 units is a likely figure. On enquiry, Harper related in 2015 that a maximum of 400 machined breech blocks were fabricated and from this all Wolf – the standard pistols, Cubs and Carbines were assembled. The simple but sturdy Wolf wire stock incidentally located into a funnel spigot fitted to the rear of the frame with a large knurled brass screw for fastening, but could be dismantled in seconds for transport. The Wolf has an ergonomic moulded grip frame but reference existed once to wood being optional and this was specifically for the later carbine. When contacted back in 2002 Harper stated that he disliked working with wood, so today very few may have finally been provided with wood shoulder stocks. 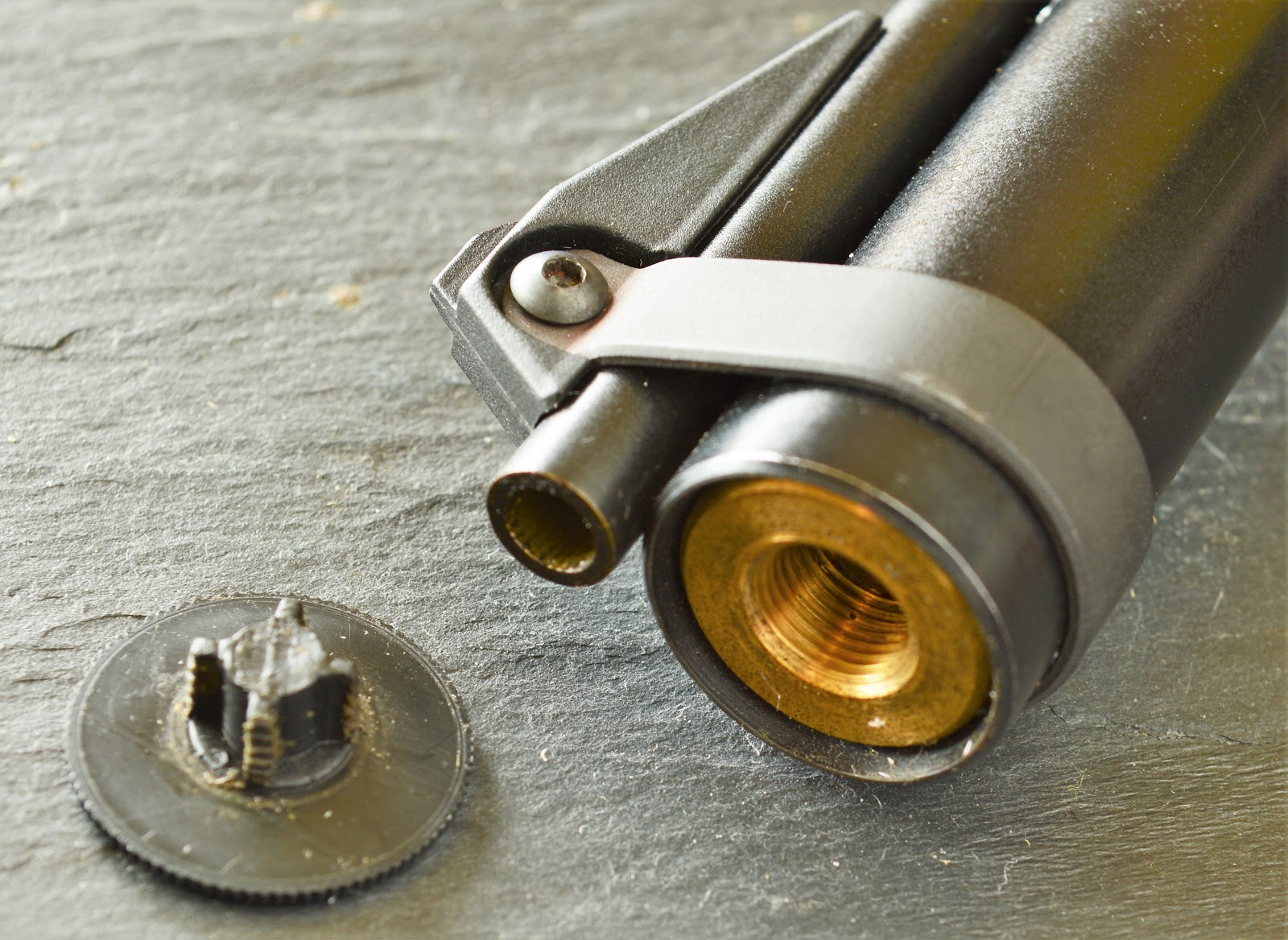 Few purpose made accessories were available or needed. A slip-on moderator with a fixing bracket that fixed it to the air cylinder tube and the wire frame shoulder stock as noted above. An early retail red dot or laser sight was also available and the styrene tray was even moulded to take this if purchased with a Wolf.

As for the elusive 3rd calibre of 6.35 or old British .25 this had been regaining popularity since the early 80s thanks to the efforts of Harper and others, so this was naturally offered. From memory it was around 2000-2001 that this option was advertised and oddly for the time at no added cost. This author has only encountered 5 units in this calibre, two short Cubs, one standard length Wolf and two rare .25 Carbines. Out of interest back when there were very few .25 barrels available and little choice in .25 pellets, Harper had used this pellet with his earlier handmade barrel liners. The Milbro Rhino in imperial measurement of .25 is in fact famously smaller with a reduced head size. It’s unclear if the much later .25 Wolf variants used the same brass tubing finished to the same specification. If so, a pellet sizer will be needed if other 6.35mm pellets are to be used.

By nature of this bespoke handmade project non standard one-offs made to customer order may well exist, but in normal production even minor details are noted. The production went in alphabetical batches of 100 units with A, then B,  then … and so on. Each unit has the batch letter prefixing the unit serial number. Some are shown here, one is A34 so number 34 from the start of production, B35 is number 35 of the second batch. These marks appear discretely to the rear end of the breech block under the rear sight. The barrels being brass can be either unfinished or painted black depending on batch. Early examples were decoratively left unfinished with the barrel matching the breech block. Later barrels were painted satin black. Then there was a crossover with Cubs having a black barrel whilst the standard length had brass. The block has an engraved logo with 'HARPER CLASSIC WOLF' applied in large lettering, but this can change from the left to the right hand side with each batch code. B35 with its later blackened barrel has the logo to the right side. Outer cartons have the matching serial number for each pistol; usually handwritten. 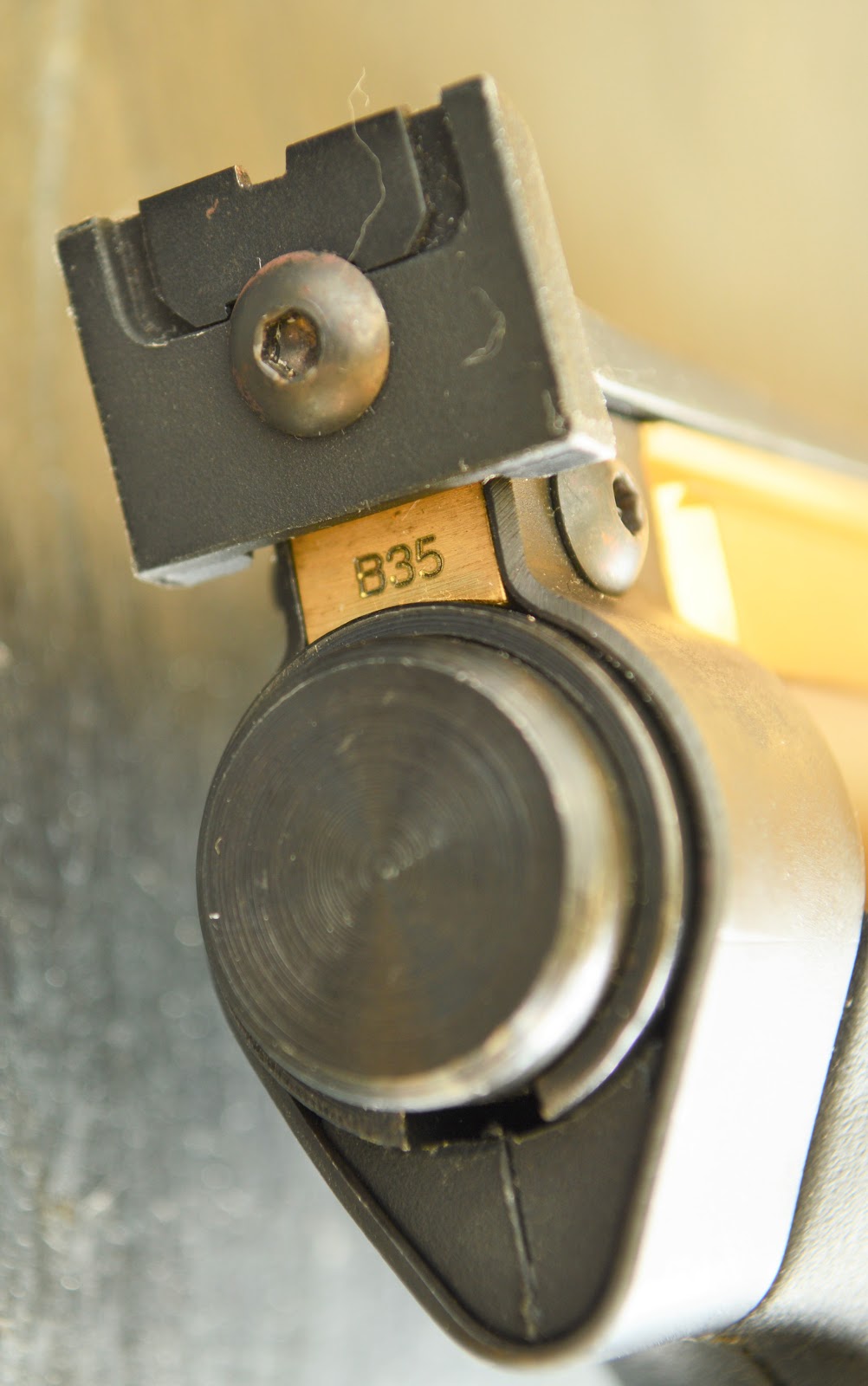 When just enough money had been saved up to buy one, a call to Harper circa 2003 from memory, revealed the project was finishing. The Wolf production lasted longer than some from larger mainstream manufacturers which when you consider how small the business was is incredible. The rest is history, the Wolf and Harper went to Daystate to develop the electronic triggers for them. The exceptional attention to detail in not only the pistol's manufacture but also in how it was presented gave this low volume production gun a premium product reputation.

Acknowledgements - Many thanks to Steve Harper