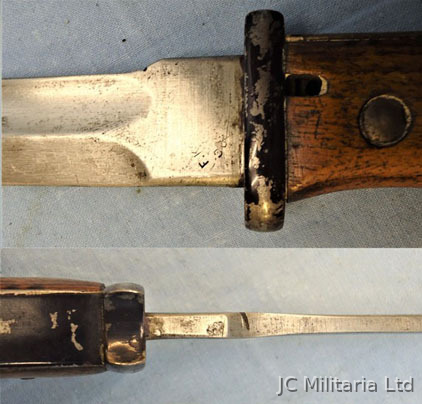 
This is a German WW1, 1884/98 bayonet which has had its sawback removed. These bayonets were in production from 1915 until at least 1917 although most of the dated examples (when they were dated at all) indicate that production peaked in 1915. This example has had its sawback removed, necessitated by the accusation in the British press that the sawback bayonet was a barbourous weapon. The bayonet ahs a feint F.K and So on the ricasso which is more than likely F. Koeller and Co., Solingen but the rest is badly rubbed. The wooden grips are held by 2 screw bolts and the black painted steel pommel carries an Imperial inspection stamp. The scabbard is black steel and undamaged. This is a nice M1884/98 with sawback removed bayonet. See White and Watts, item 286 on pages 115 and 129 for an unaltered example. The price includes U.K. delivery. BAYO 281
£245.00...Read full description
CategoryBlades
SubcategoryBayonets
ConditionUsed
Price£ 245
Sale typeTrade
MakeF. Koeller and Co., Solingen
Manufactured Year1915 Dated
Your referenceBAYO 281