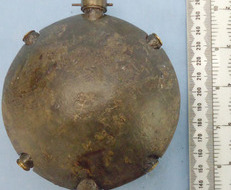 
INERT DEACTIVATED This is an original WW1 German Model of 1915 Diskushandgranate (Large) (Disc grenade). This grenade was also known by the nickname ' Oyster Grenade' for obvious reasons, they were intended to be used like skimming stones across water from trenches and bomb craters in 'No Man's Land.' The oyster is an assault grenade, in that they could be used by an attacker and thrown sufficient distance so that the blast effect and shrapnel caused by the thin steel casing would not be a danger to the person throwing it. This grenade is 4.5 inches in diameter and 2 inches deep. The grenade contained 6 channels each containing a detonator so that whichever one came in contact with a hard surface caused the grenade to explode, an early ' all ways' fusing system. The price includes UK delivery and no licence is required to possess this grenade in the UK if retained as part of a collection or display. O 1335
£245.00...Read full description
CategoryAccessories
SubcategoryAntiques & Militaria
ConditionUsed
Price£ 245
Sale typeTrade
Manufactured YearWW 1
Your referenceO 1335
Recommended UsageCollection item