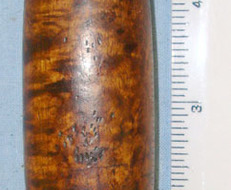 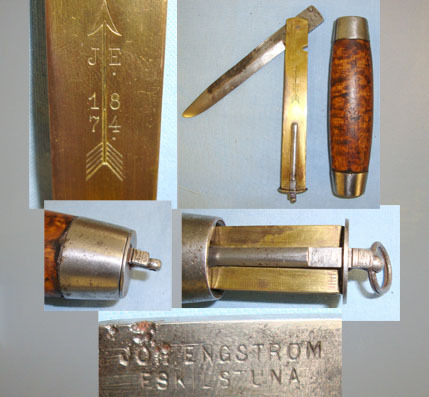 
One of the most successful Swedish Eskilstuna cutlers was Johan Engström (1846 – 1915). Before setting up his factory in 1874 (Fabriksaktiebolaget Johan Engström), Johan had worked with cutlers and studied knife production in both Sheffield (G. Westerholm & Son) and Solingen. In his early years, Johan mainly produced razors and daggers. Johan added barrel knives to his production line in the 1870’s. The company produced high-quality barrel knives and received international recognition at shows in Sweden, France, U.S.A., and Canada. At one time the well-known US importer Edward Zinn ordered 3000 dozen barrel knives from the Engström company. Johan died in 1915 which marks the end of the Engström company. The knives used for hunting and fishing have an ingenious mechanism. The folding 4” drop point steel blade with brass scales sits inside the barrel shaped Curly Birch wood handle. The blade is released by depression of a ribbed steel lever at the butt of the handle. The folded blade can then be withdrawn from the handle, opened and then pushed back in and through the hilt until it locks in place. The knife measures 9 ¾” overall length when assembled for use. Our example is in excellent condition for its age. The wood handle is has some knocks consistent with age but no cracks or holes. The steel ferrule and butt cap with locking catch and lanyard ring lug are undamaged and function as they should. The blade’s brass scales are undamaged. One scale is crisply dated 1874 together with ‘arrow JE’ trademark of Johan Engström. The blade has just staining and light pitting to be expected. The blade is marked ‘JOH ENGSTROM ESKILSTUNA’. The price includes UK delivery. Sn 15908:5
£475.00 ...Read full description