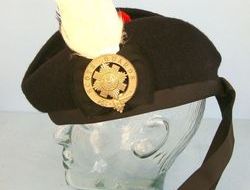 
The Scots Guards, part of the British Guards Division, is one of the Foot Guards Regiments of the British Army. Their origins lie in the personal bodyguard of King Charles I of England and Scotland. Its lineage can be traced as far back as 1642 since which time it has served with distinction in all conflicts involving British Forces. This is a mint unissued Scots Guards Piper’s Glengarry. It is fully lined with black material and has correct black ribbon tassels and red pom-pom. Its original Metal Glengarry Scots Guards Regimental Pipers badge is mounted on a bed of black ribbon. The rear of the badge has the correct 2 mounting lugs and split pin. Its black and white Blackcock hackle is in the same mint condition. It is approx. UK size 6 ½. Price for this mint Glengarry to a famous Scottish Regiment includes UK delivery. Sn 11516
£275.00 ...Read full description
CategoryAccessories
SubcategoryClothing
ConditionUsed
Price£ 275
Sale typeTrade
Your reference11516
Recommended UsageCollection item