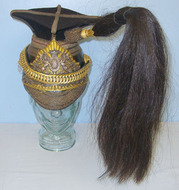 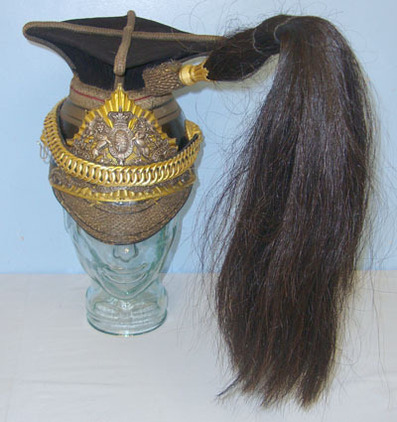 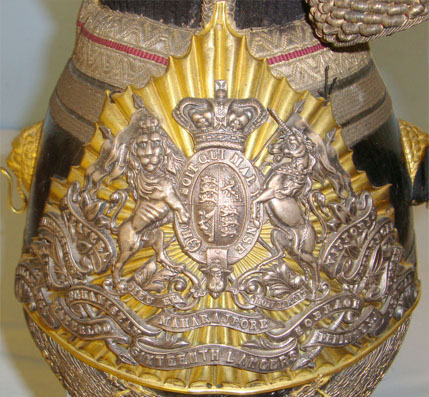 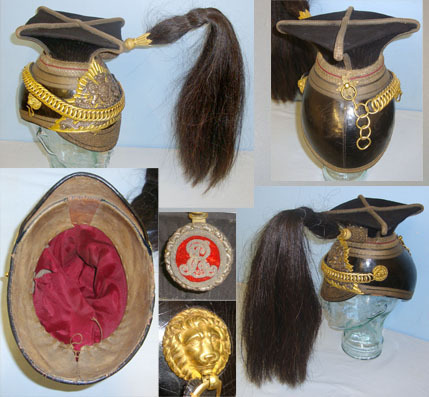 
The 16th The Queen's Lancers was a Cavalry Regiment of the British Army, first raised in 1759. It saw service for two centuries, before being amalgamated with the 5th Royal Irish Lancers to form the 16th/5th Lancers) in 1922. The Regiment was raised in 1759 by Colonel John Burgoyne as the 16th Regiment of (Light) Dragoons, being the second of the new Regiments of Light Dragoons; it was also known as Burgoyne's Light Horse. The Regiment was closely involved, undertaking several cavalry charges, in the action leading up to the capture of the French Garrison of Belle Île in April 1761 during the Seven Years' War. It also made a major contribution to the British victories against the Spaniards at the Battle of Valencia de Alcántara in August 1762 and at the Battle of Vila Velha in October 1762 during the Anglo-Spanish War. In 1766 the Regiment was renamed after Queen Charlotte as the 2nd (or The Queen's) Regiment of (Light) Dragoons, the number being an attempt to create a new numbering system for the Light Dragoon Regiments. However, the old system was quickly re-established, with the Regiment returning as the 16th (The Queen's) Regiment of (Light) Dragoons in 1769. The Regiment arrived in New York in October 1776 for service in the American Revolutionary War. It was involved in fighting at the Battle of White Plains in October 1776, the Battle of Brandywine in September 1777 and the Battle of Germantown in October 1777 before seeing more action at the Battle of Crooked Billet in May 1778, the Battle of Barren Hill later that month and the Battle of Monmouth in June 1778. The Regiment returned to England in spring 1779. The Regiment next landed at Ostend in April 1793 for service in the Flanders Campaign and was present at the Siege of Valenciennes in June 1793, the Siege of Dunkirk in August 1793 and the Siege of Landrecies in April 1794. It also took part in the Battle of Beaumont in April 1794, the Battle of Willems in May 1794 and the Battle of Tournay in later that month before returning to England in February 1796. The Regiment was then based in Ireland between autumn 1802 and 1805. During the Napoleonic Wars the Regiment were ordered to support Sir Arthur Wellesley's Army on the Iberian Peninsula and landed at Lisbon in April 1809. The Regiment fought at the Second Battle of Porto in May 1809, the Battle of Talavera in July 1809 and the Siege of Ciudad Rodrigo in April 1810. The Regiment also saw action at the Battle of Bussaco in September 1810 the Battle of Sabugal in April 1811 and the Battle of Fuentes de Oñoro in May 1811. It next fought at the Battle of Salamanca in July 1812, the Siege of Burgos in September 1812 and the Battle of Vitoria in June 1813. It was next in action at the Siege of San Sebastián in August 1813 and having advanced into France, at the Battle of Nivelle in November 1813. The regiment took part in the Hundred Days landing at Ostend in May 1815. It charged with John Vandeleur's Cavalry Brigade at the Battle of Waterloo in June 1815. After the battle, their commander, Lieutenant-colonel James Hay, lay so badly injured that he could not be moved from the field for eight days. The Regiment had been the sole British Cavalry Regiment to serve throughout the Peninsular War and at the Hundred Days. In the Victorian era, the Regiment was dispatched to Ireland in March 1816 where it was re-designated as a Lancer Regiment in September 1816, becoming the 16th (The Queen's) Regiment of (Light) Dragoons (Lancers). It returned from Ireland in June 1819 and was sent to India in 1822 where it saw action, using lances, against the Marathas at the Siege of Bharatpur in January 1826. It saw action again at the capture of Ghuznee in July 1839 during the First Anglo-Afghan War and at the Battle of Maharajpore in December 1843 during the Gwalior Campaign. It also took part in the Battle of Aliwal in January 1846, when the Regiment charged and dispersed a body of Sikhs ten times its size, and also fought at the Battle of Sobraon in February 1846 during the First Anglo-Sikh War. The Regiment’s title was simplified to the 16th (The Queen's) Lancers in 1861. It served in India between 1865 and 1876 and again between 1890 and 1899. Prior to the Boer Wars 1899-1902 the Regiment was awarded Battle Honours: Talavera, Fuentes d'Onor, Salamanca, Vittoria, Nive, Peninsula, Waterloo, Bhurtpore, Ghuznee 1839, Afghanistan 1839, Maharajpore, Aliwal, Sobraon. This is a scarce, original, Cavalry Officer’s Lance Cap of the 16th The Queen's Lancers. The Lance Cap has the correct internal construction, skull and peak of black patent leather with waist of Gold lace and red band. The rear has the correct gilt metal ring & hook with 4 leaf mount. The peak is adorned with gold purl. The cloth top and sides are covered in black cloth of the Regimental facing colour. Bullion cord extends across the top of the cap and down the 4 angles. The cap has stylised monogram rosette on a field of red and Lion’s head bosses with velvet backed link chain. It has a brass plume boss with dramatic black horse hair plume. The cap is fitted with the correct Victorian gilt rayed plate and silvered badge comprising the correct Victorian Crown Royal arms & correct pre Boer War Battle honours above banner ‘Sixteenth Lancers’. The Lance Cap is complete with original leather sweat band and silk liner which are clean but have service wear to be expected. There are no visible manufacturer, size or date marks. The cap is approx UK size 7 ½. The price for this impressive Lance Cap to a Prestigious Lancer’s Regiment includes UK delivery. Sn 17600
£2,850.00...Read full description
CategoryAccessories
SubcategoryClothing
ConditionUsed
Price£ 2,850
Sale typeTrade
Manufactured YearVictorian
Your reference17600