Vintage airguns come in all shapes and sizes. Many think that only springers were made back in the dark mists of time when in fact Co2 airguns existed in the 1800s. As for pneumatic air guns, long before modern PCP’s one form or another of this type existed for hundreds of years. Big bore ball and butt reservoir pre-charged air guns were around even before then, but were way too expensive for common folk to buy.

When affordable airguns began to be manufactured in the 1880's nobody could make their minds up about which type or style was best. A spring-piston air rifle could be guaranteed to perform well shot after shot but even oddities like elastic rubber band powered guns were developed. Pop-outs raised their heads too for a while but thankfully disappeared into the toy store. Co2 was too far out there, with great difficulty in getting carbon dioxide gas unless you just happened to be very rich, live in France and owned a Giffard airgun. After a while, Great Britain and most nearly all of Europe stuck with the reliable break-barrel springer style. America, however, developed a liking for the pneumatic airgun.

Many early airgun pioneers were also into designing bicycles which were another new novelty at the time. An airgun that used the principle of a pump like that for a bicycle to charge air into a chamber seemed a great idea. These pneumatics then developed on their own; running parallel for decades with springers. Despite the new craze for Co2 that entered the scene, the pump-up pneumatic continued. Although nowhere near as popular today they are still made.

Totally self-sufficient with no need for bottles and charging gear, many airgunners cut their teeth on these affordable, simple pump-up airguns. The downside with them is they require a number of pumps to reach full potential and each slap of the arm makes noise. This in itself wasn’t a drawback when springers were heavy and clunky. The pump-up pneumatic divided opinion on suitability for things like hunting. Having lumped a heavy HW, Diana or a BSA Airsporter springer around a field on a hot Summer's day, trying one of these pneumatics out in the field could be eye-opening.

Rod removed for a pump re-seal

Most come with an underarm pump lever that is connected to the front of the main compression tube. Call it scissor action if you like, the arm is operated out and back and each stroke or pump forces a pocket of air in front of the seal assembly on the end of an internal rod, to enter a one-way valve. However, look further back and most had simpler straight pump-rods. The simplicity of these early but very effective airguns can be a revelation.

A TDR Edwardian style - what springer could do this?

This one shown here is an early pneumatic from America contemporary with the later Edwardian era. In the same period that our own BSA were selling the superb Lincoln Jeffries inspired fixed barrel underlever air rifle that was taking Britain by storm the pneumatic airgun was very novel. This piece of nostalgia is the Benjamin Model E - just think Model T Fords, Charlie Chaplin and early silent cinema and you are halfway there. Compared to a steel Gem break-barrel airgun from the same period this weighs next to nothing and is only 36.5” long at rest. Early advertising ephemera may have indicated a youth interest due to its small size but unlike so many early attempts at designing and manufacturing airguns, this is by no means a toy and quite the opposite in fact.

This Model E is made from a brass tube that contains the valving at the rear end and the pump rod with its leather seal ahead of it. The barrel is brazed along the tube with the trigger knocking open the valve pin to the rear. Pulling the rod out fully clears the attached leather seal past the small air inlet hole up near the muzzle. Air rushes in and then the gun is readied for compression. Compared to pumping and slapping a 1980's pneumatic with an underarm lever this rod works silently as it is forced back home. The best way to charge one is as the manufacturer illustrated in their brochures, that is to brace the end of the rod with its broad steel cap onto the ground and then to force the rifle down onto it. Standing straight, this is very easy indeed and correct posture helps when attempting further pumps for more power. With the rod extended out the entire gun is 53” long or tall if trying to compress it down vertically. To load the Model E lead shot ammo just shy of true  .177 calibre was dropped down the barrel which then lodged by gravity into a narrow neck section in front of the valve where it was held tight ready for discharge. Thankfully today there are a number of lead ball sizes available to choose from for fine-tuning these. 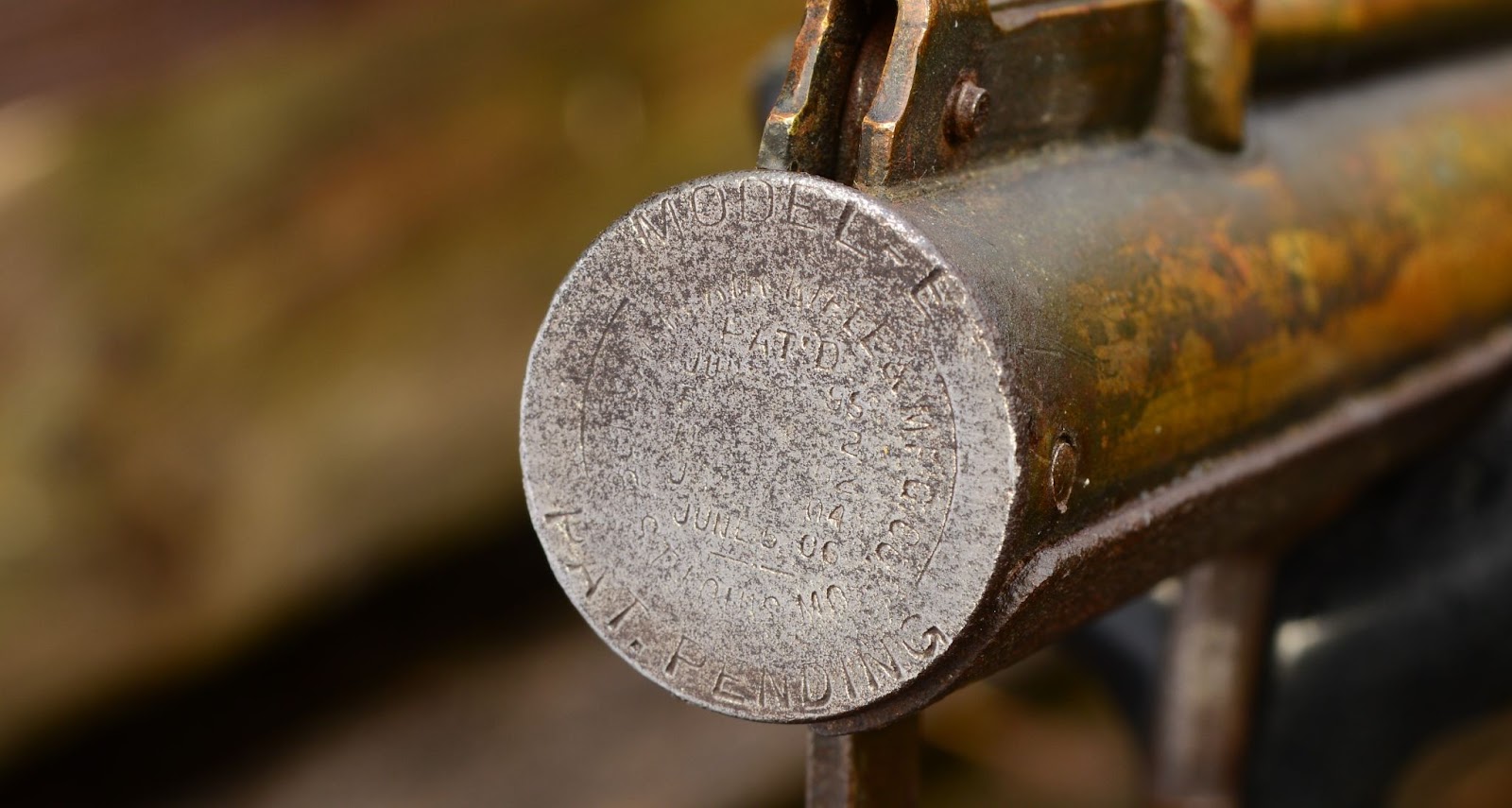 This pump-rod pneumatic makes for a pokey airgun and performs very well indeed when compared to contemporary springer air rifles but with none of the clatter, recoil or weight. It's a take-down too which made for easier packing and posting, a big plus for retailers. Almost the entire length of the compression cylinder is utilised with the air inlet hole only a few inches from the muzzle. The volume of air is, therefore, larger per stroke so less effort and less charging per shot is required than for many later pump-up pneumatics. These simple airguns helped form the basis of the later pneumatic pump-up market that continues to this day. For collectors, these somewhat rarer early Benjamins are back with a bang!

Jonathan Young
Writer
Published on 18-11-2021
Started out very young with cap pistols, progressing to archery and this developed into a real interest in studying older weapons. Air weapons followed and it's been the Airgun that's drawn me deeper into shooting more than anything. The sheer variety of different types available is unparalleled, from bb guns to replica pistols, from rusty old springers to high-end target rifles. It's impossible to get bored! Add a dash of patina and you gain entry to the wonderful world of Vintage Airguns. My very first air gun was a £35 diecast Daisy - I've never looked back.