Advice Rifles
Gun Dealers Gun Shops Shooting Grounds Shooting Accessories Antiques/Militaria Shooting Instructors Gun Repair
All service types >
Business types
Regions
Favourite ads
Last viewed
Saved searches
Last searches
Ads that you mark as favourite will be shown here.
Come back here to remember your latest viewed ads.
When you browse ads, the searches that got you there will show up here.
Your saved searches will show up here.
Home / Community home / Advice / How to make a target box at home
Be a contributor
Advice · Airguns

How to make a target box at home

For safe target shooting and plinking, a manufactured metal target box is great. The pellet's energy is absorbed on impact and drops safely. Similarly, knockdown targets set inside a metal case are very popular. In a private garden setting, however, these may be too noisy for some when less noise is appreciated. Having a safe backstop is a given must anywhere but especially in a garden. Shooting modern BB pistols is popular but as most know these metal balls will bounce and make a right racket.  Time for a purpose made target box for some close-range plinking but one also useful for longer range air rifle shooting down to the end of the garden.

It’s quite easy to make a safe target box whether it be small and portable or a larger static type left outside. As a compromise to making one from plywood sheet, this old wooden wine case destined for the bin was picked up for free at a supermarket. The shop assistant thought it was for something trendy like filling it with compost to grow herbs in? Nope “it’s for shooting at”. It probably wasn’t the wisest thing to tell a stranger these days… 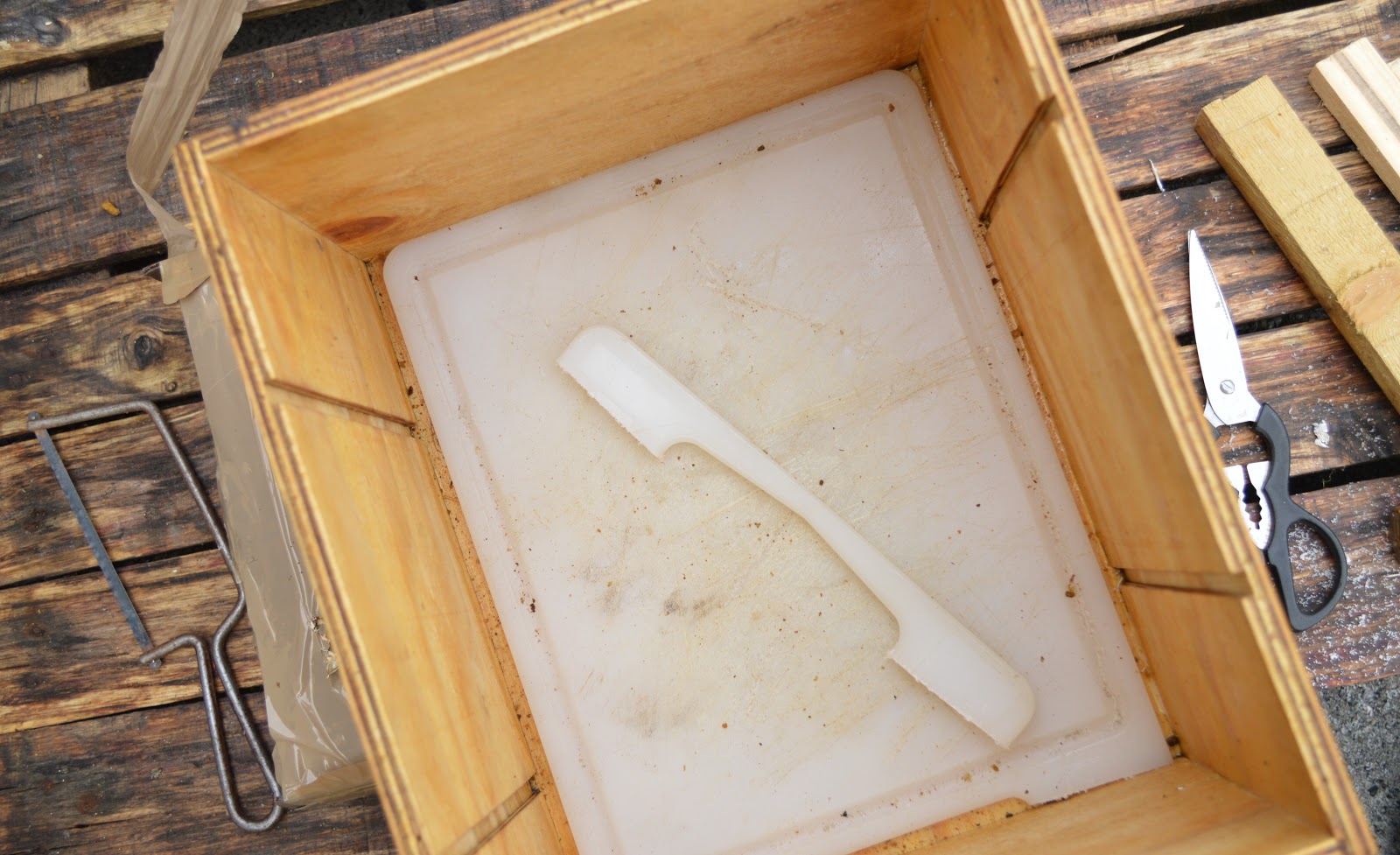 On its own, a wooden box won’t be enough. MDF, plywood and natural timber can differ enormously in thickness and especially hardness. Having a solid, resilient surface is vitally important. Ever cautious, we need to think about reinforcing any box either on the outside or from the inside to prevent through and though shots causing havoc.  For this project, a well-used chopping board in poly-oly-wotsit plastic was scavenged from the kitchen. Stiff plywood or if available an offcut of thick steel sheet could all be used instead, anything that will stop dead ammo from exiting the box. In fact, on another build a broken spade was dismantled down to use the steel blade for use inside another similar target box.

Never underestimate the power of that tiny pellet whizzing downrange from your air pistol. As for higher power from air rifles, always rethink what and where you’re shooting into. 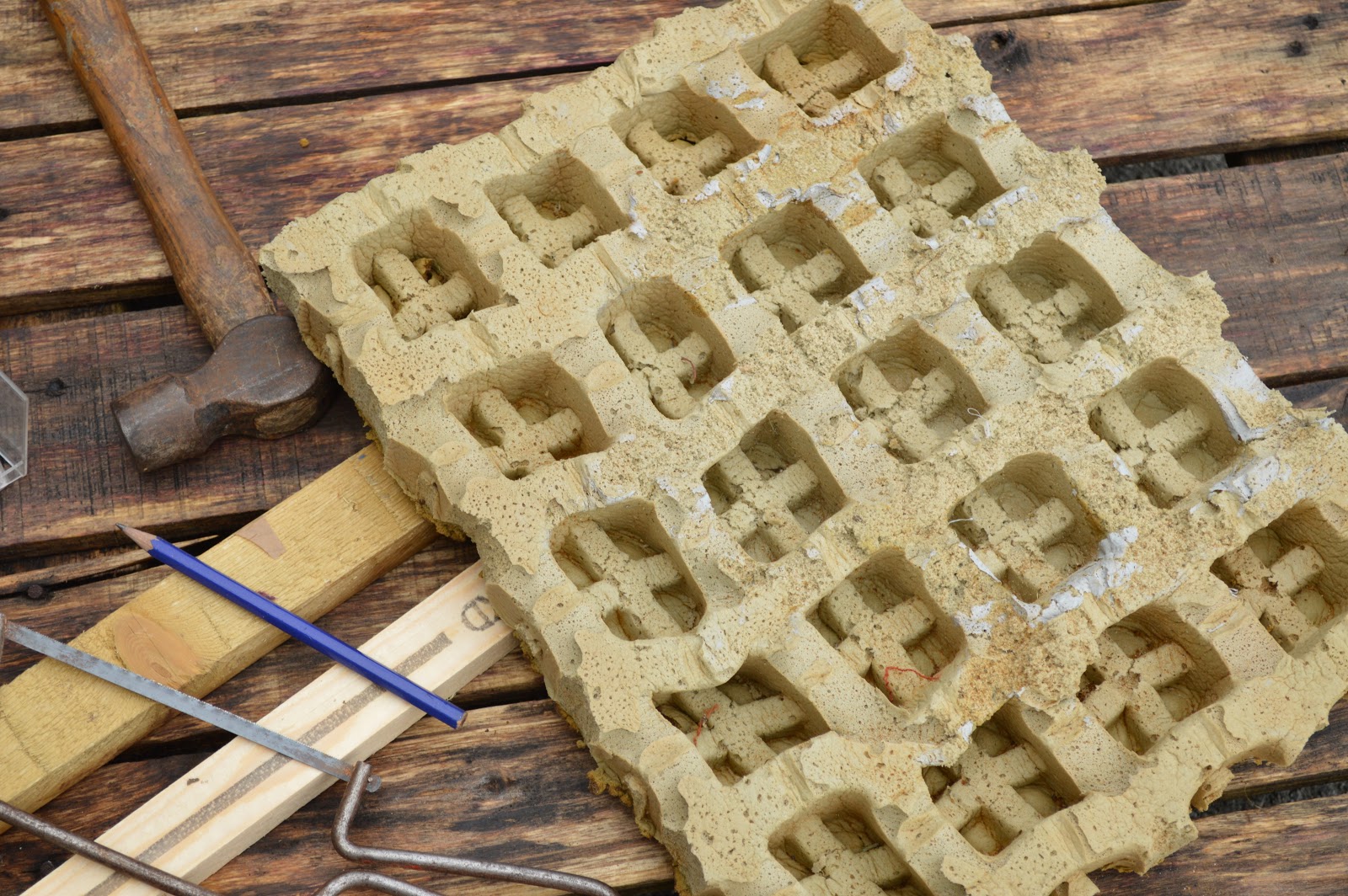 As an example, sticking a target card to some old aerated cement blocks sat in front of an open-ended plastic car buoy was thought to be more than adequate. After all, the pellets would embed into the soft pumice and with a stout open-ended bucket on the other side what could go wrong.  As all the pellets hit exactly home into the same spot (not bragging) a hole developed right through the bricks. Those big heavy .25 pellets were now impacting behind on the thick flexible plastic base of the bucket with a surprising result. Think mortar. Totally unaware with glasses and ear defenders on,  pellets were now being 'fired' back out of the bucket. Eventually one whizzed right past overhead with only an inch to spare, raising the question “where's that draft coming from?...” before the design flaw was discovered. Doh!

A lesson learned that day for sure, so back to making things safer! The internal board was easily cut to shape with a hacksaw, then fitted inside the box. That's for a built-in safety factor. As this was for use in a private garden, a chill factor was now needed as shooting at anything is usually very noisy. It’s amazing how much attention is drawn when shooting as the  'thump' of pellets hitting home on a hard surface will echo. We all know that sound – 'thump', then 'clack' or if it’s a pellet repeater then 'thump thwack thump' - and it goes on for hours and hours. Soon heads start bobbing along garden fences. This was a good opportunity to experiment with some form of soundproofing, so an old foam cushion was rescued and cut up roughly to size to match the interior walls. 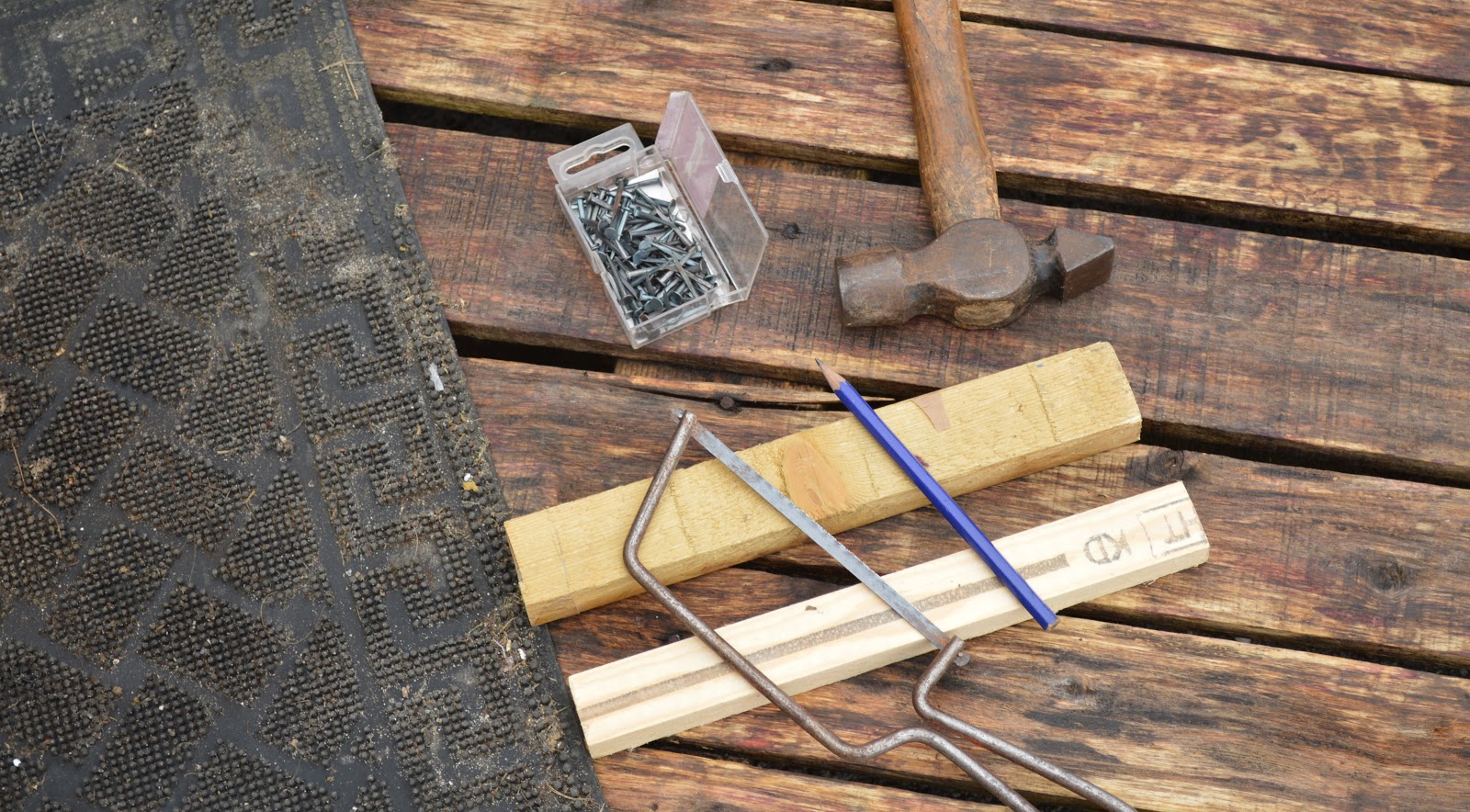 To help with the sound even more, a rubber car mat was cut into strips then attached at intervals to both sides of two battens placed inside. Other material could have been used, carpet tiles for example but climbing into skips is frowned upom down at the Council yard. Scrapyards provide lots more choice, even if you have to fork out some money.  Many years ago a huge thick rubber fire door from a factory was bought then cut up into sound deadening panels for use in an old kit car. The best £8 I’ve ever spent!

Strips of wood were used to line the aperture of the box making a lip. Around three edges these were tacked, but on the fourth side assigned to be the base, the batten wasn’t fixed. This removes allowing spent pellets to be tipped out into a bin for recycling. The stiff card was tacked to the outer lip for pins to hold the target cards. Having found a bunch of old A4 file pockets these have been instead. It’s easy to slide a target card into the open end for each session and the pocket and backing card can be replaced when ragged. No more messing about with sticky tape over damp paper targets! 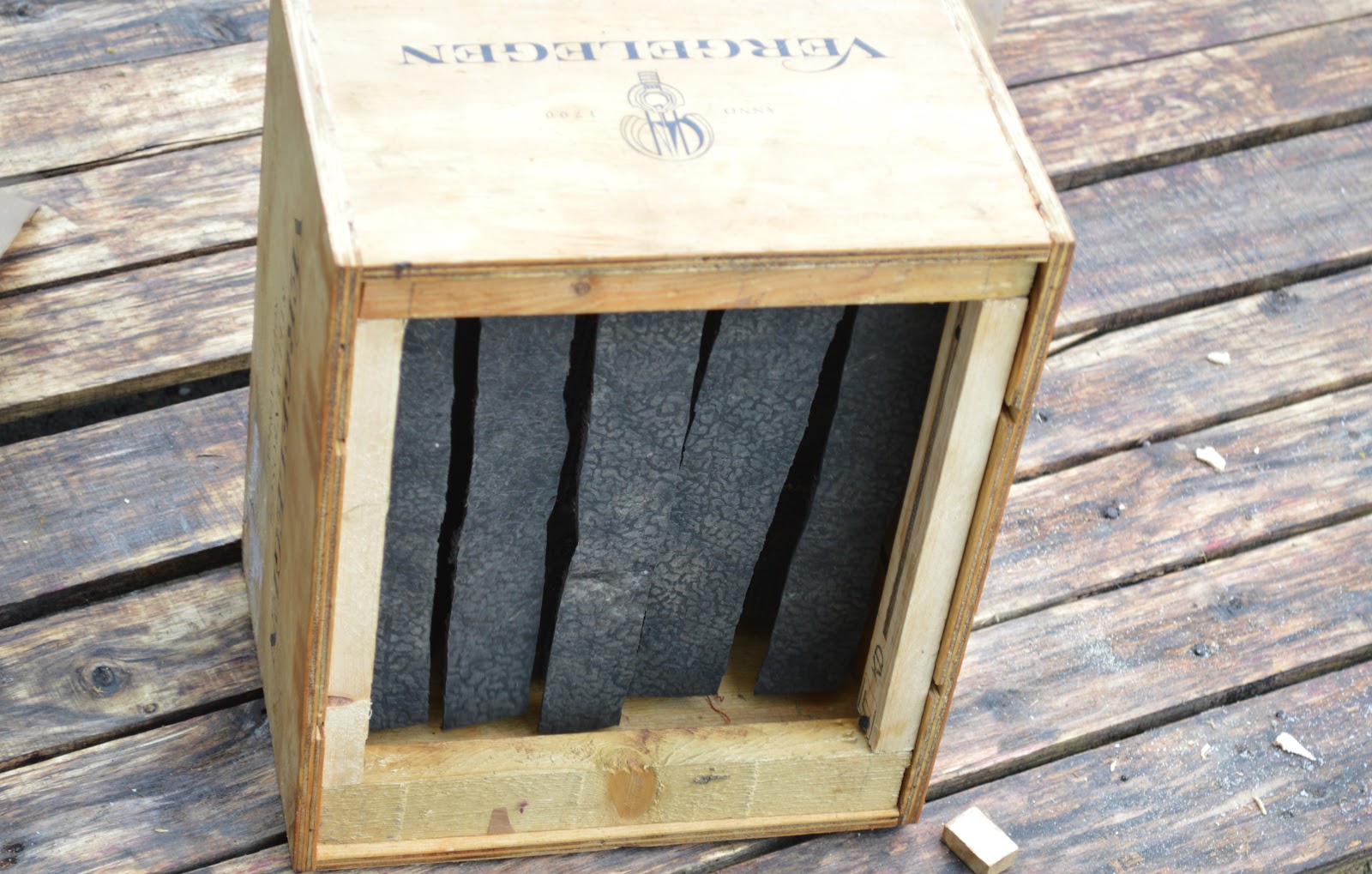 It’s always good practice to inspect any target box, especially one left out in the elements. The soundproofing strips on this one will get ripped through eventually. As there is a pile of old bubble wrap in the garage, this is going to be stuffed into balls and jammed inside the box; after first checking on the plastic chopping board at the back – and for that, a spare piece of thick ply is sat ready. So there you have it: a safe stout box that doesn't go waking the dead every time you hit it. Shoot Safe! 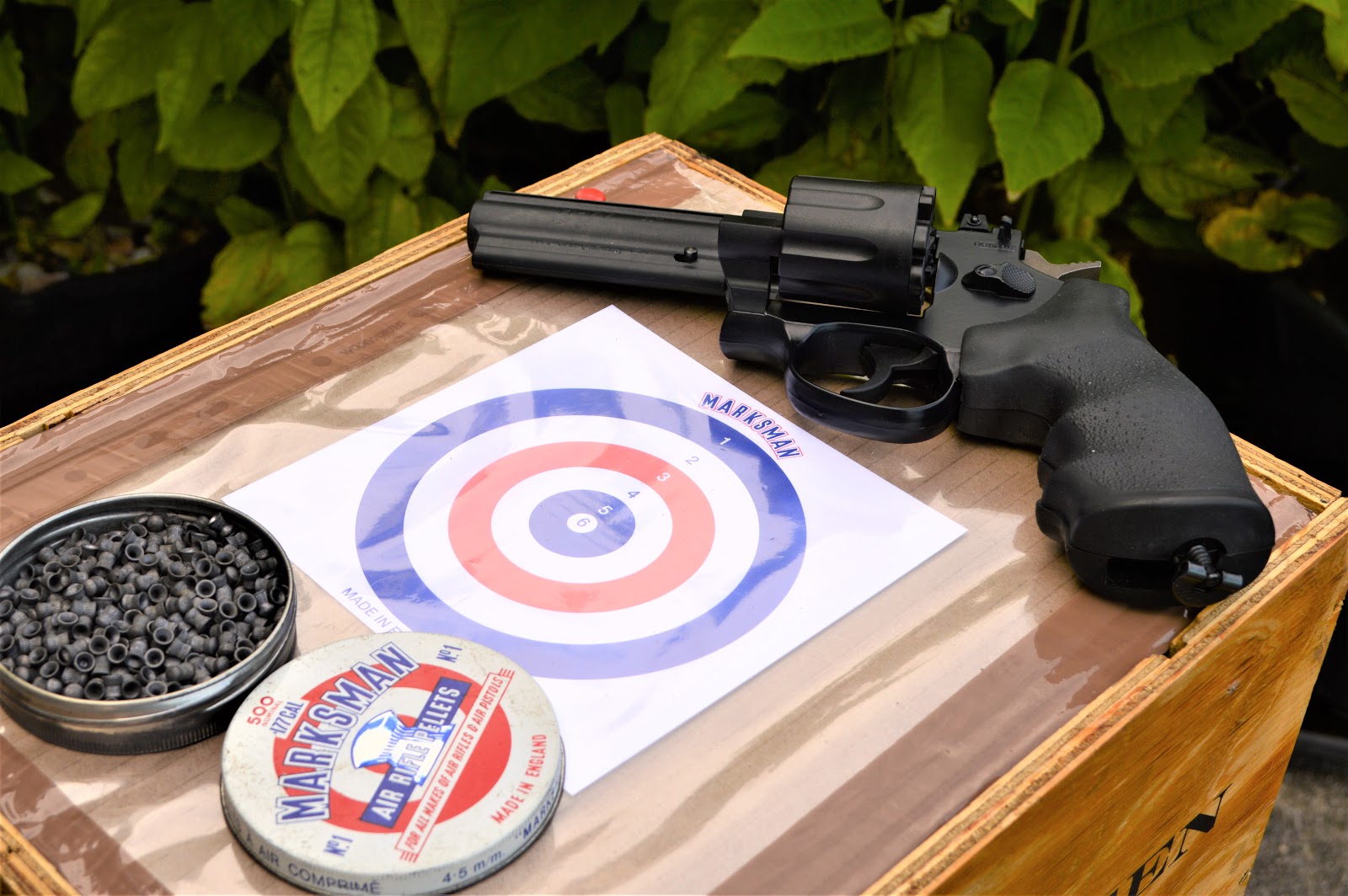