There’s still a lot to be said about using open sights. Let’s face it, if the eyes are still working okay and the sights are a good design then these are great for most airgun shooting. Today, whilst some airguns are still supplied with opens, they may have the rear sight placed too near the eye; making them virtually unusable. One of the reasons why the pre-War BSA Lincoln Jeffries air rifle proved popular was the sight placement was so accommodating. With the rear sight far down on the barrel rather than on the action even ageing eyes could still get a bead on target. Many popular older classics through the 1970s and ‘80s made by Webley and BSA continued with this design despite the increasing popularity of scopes. Today however rightly or wrongly scopes are seen as a necessity, with modern airguns supporting open sights less and less.

When airgun scopes entered the market these were always regarded as being at the budget end in terms of shooting optics. However, where the maximum target distance can be less than 50m on most occasions, scopes don’t need to be ultra hi-tech or cost a small fortune. Added features such as an adjustable dioptre feature can help, but huge zoom ranges set high can magnify shake leaving a twitching image. Pulling back on the mag setting gives a far better sight picture, pulling many scopes back into more successful use. Hi-mag scopes may be more suited to specialised, prolonged static shooting but for many years now a budget-priced fixed focal 4x32, 4x40 or larger 6x40 has been more than adequate for most shooting. Despite the current trend for ever more expensive and technical scopes, this hasn’t changed.

Time taken to correct fitting will pay off later

As for scope reticules as the human eye can accurately assess a centre point without crosshairs when using dioptre and peep sights, then it’s no surprise that crosshairs without fancy designations have worked well enough for decades. The old full-bore design 30/30 duplex reticle crossed over into airgun use and has lasted, ignoring that no airgun is trying to take a deer at 100 metres which is what this was originally designed for. Today ever more technical reticules are seen each allegedly offering better options and performance, but mostly all are derived from military use or full-bore hunting. A mil-dot reticule may well help with quicker correction of pellet trajectory or when swopping to a heavier pellet during a shooting test session but with practice however any basic reticule design will suffice. It’s a personal choice, but looking through many scopes most users want to see what they are shooting at and not be bombarded with an abundance of unnecessary graphic data. After a zeroing-in session beforehand most competent airgunners will know exactly where their pellets are landing and all this takes is practice.

Proper fitting is important for any scope. Modern alloy mounts don’t cost a lot especially if a bundle of used examples are bought. Then a variety of mounts in different heights can be tried out to achieve the best scope and eye alignment without stressing neck muscles. Rifle design may on occasion mean a scope rail is sited too far forward on the action resulting in the rear scope ocular being too far away from the user's eyeball. To compensate the user cranes the head forward resulting in neck cramp and ruined concentration. In all disciplines, whether target shooting, hunting or even back garden plinking the user needs to be as relaxed as possible. Time taken selecting the best combination of scope and mount will prevent wasted shooting time later.

If shooting a springer with added recoil then a little more care taken in selection will give the scope a solid footing with perhaps a scope creep arrestor block added behind one of the mounts. This prevents the mount and scope from creeping off zero due to recoil as the spring and piston lurches forward then back. That said, if a gun is recoiling badly it’s wiser to spend out on a pro tune first before spending money on anything else. 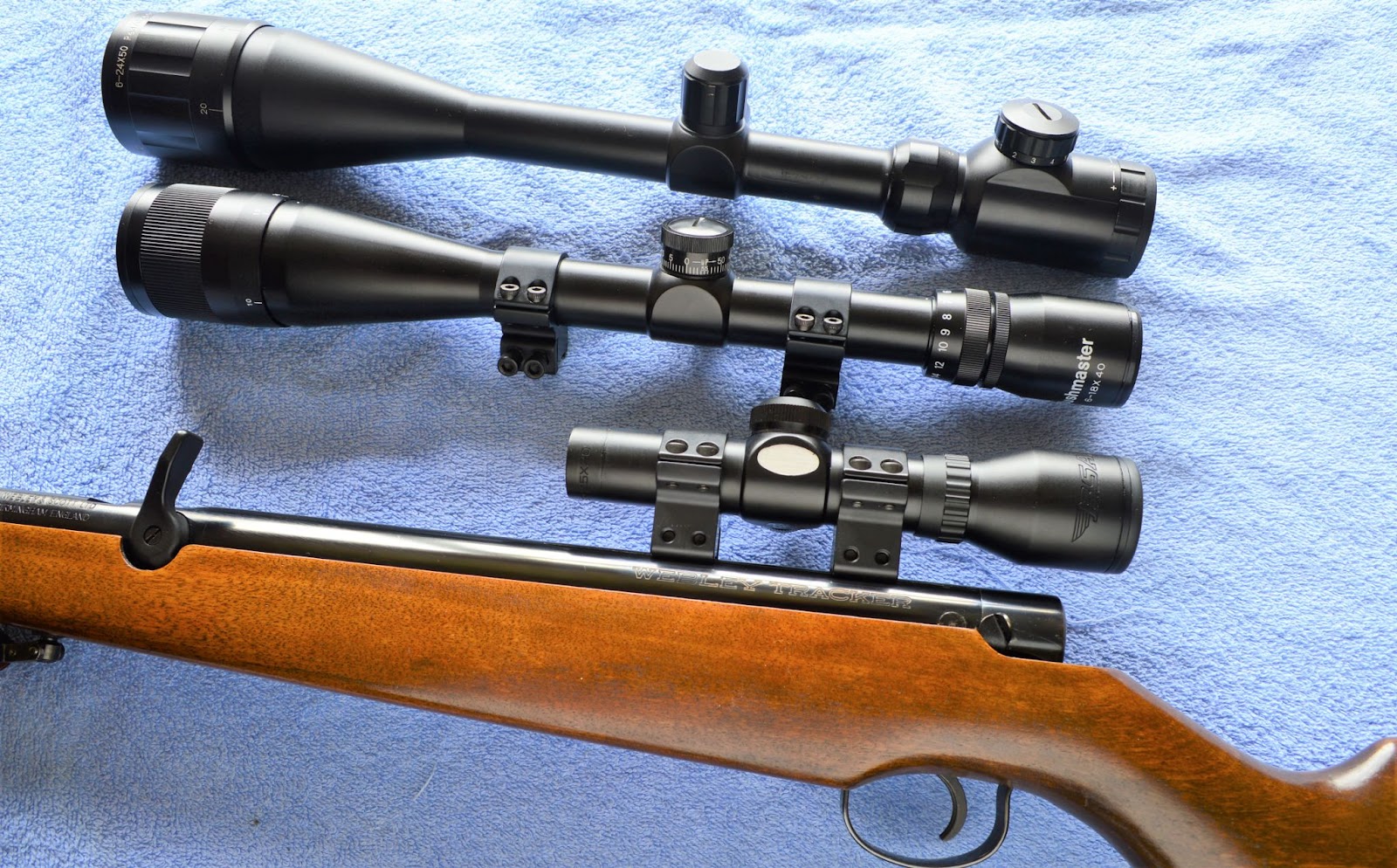 How big can you go?

As for scopes, each shown here has tangible worth despite costing little or nothing. Rummaging in bins at fairs or in old gunshops can reveal some usable interesting scopes. One large scope, too big for most needs was found jammed into a box of broken and damaged scopes in a gunshop many years ago. The only damage as such was the mounts had been overtightened, crimping the alloy tubing. Having stripped scopes down on occasion, such light crimping has never so far been seen to occlude the light path, with zero effect on the optical image. This minor damage was overlooked and who would dare haggle over the asking price of £5. Too big for words, too heavy for comfort, and with more bells and whistles than a much favoured smaller fixed scope, this budget monster has to date worked well. Whilst the current trend is to have ever more technical scopes that sell at phenomenal cost, practice sessions with whatever is to hand can yield surprising results.

Crimping - but don't discard too quickly

Jonathan Young
Writer
Published on 12-04-2021
Started out very young with cap pistols, progressing to archery and this developed into a real interest in studying older weapons. Air weapons followed and it's been the Airgun that's drawn me deeper into shooting more than anything. The sheer variety of different types available is unparalleled, from bb guns to replica pistols, from rusty old springers to high-end target rifles. It's impossible to get bored! Add a dash of patina and you gain entry to the wonderful world of Vintage Airguns. My very first air gun was a £35 diecast Daisy - I've never looked back.